Much has been made of the admittedly strange relationship between Donald Trump and his daughter, Ivanka. The two are obviously close, but eyebrows have been raised due to comments Trump has made about Ivanka, such as suggesting that he might date her if she wasn’t his daughter. Still, when Bill Maher decided to make an incest joke[1] about the two of them, even his own fans were not amused. 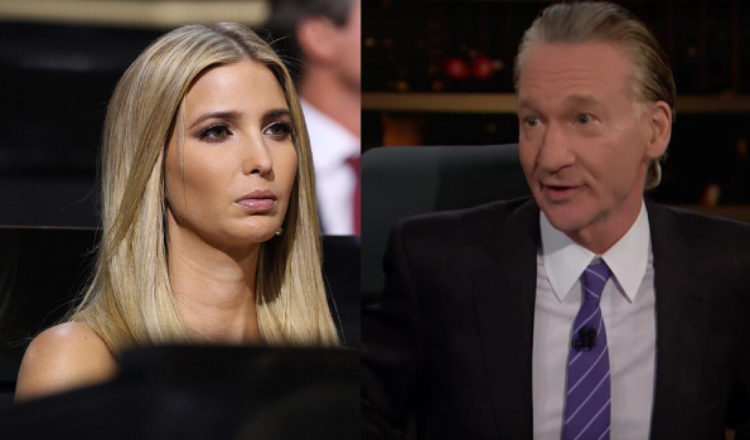 On his HBO show, “Real Time with Bill Maher,” Maher was having a discussion with “New York” magazine reporter Gabriel Sherman. The discussion was ostensibly supposed to be about the influence Ivanka has on her father, but Maher quickly took the conversation into a very creepy direction.

“What do you make of Ivanka and her efforts to sort of humanize her father?” Maher began by asking. “We see all this misogyny at Fox News, we see it in Donald Trump himself. A lot of us thought, Ivanka is gonna be our saving grace.” Not too bad so far, right? But then, Maher took it too far. “When he’s about to nuke Finland or something, she’s gonna walk into the bedroom and — ‘Daddy, Daddy… Don’t do it, Daddy,'” he joked. He then asked if Sherman agreed with him. “Is that how you see Ivanka?” he asked. Sherman, stone-faced, merely answered, “No.”

You can see video of the cringeworthy exchange here:

People quickly expressed their disapproval of the sick “joke”.

Bill Maher incest "joke" about Ivanka Trump sick. Just shows everyone how deranged Maher truly is to even think of such crap.

@seanhannity[4] the incest joke bill maher made about ivanka and our president was repulsive. imagine someone said this about Obama !!

All @billmaher[6] can do is virtue signal and be wrong. Incest jokes are low quality, fitting of Bill Maher. Thats #TheMessyTruth[7]

Ivanka Trump is a problematic, puzzling figure, but if liberals are going to castigate Donald Trump for his boorish, sexist behavior, they shouldn’t behave in a similar fashion.

Of course, this isn’t the first time Maher has made tasteless remarks and it likely won’t be the last. The question is, why does HBO still keep his show on the air?

Bill Maher’s words and actions show that he is a sick, twisted individual. And this is who HBO wants representing them?