LGBT pissed off Ivanka’s rich neighbors by having “Queer Dance Party” in front of her DC house, but the protesters messed up one thing [VIDEO]

Hundreds of LGBT supporters crowded the streets in front of Ivanka Trump’s $5.5 million DC home where they staged a “queer dance party for climate justice” – but some of her rich neighbors weren’t too thrilled. The anti-Trump crowd chanted, danced on top of cars and invaded the usually quiet neighborhood. The LGBT people were protesting against Trump[1], against climate based decisions and against Ivanka for going soft on climate change and queer issues. LGBT people are still upset that President Trump put transgender bathroom issues back in state/local control. People always say they want big government out of their decision making, right? Well, there it is, so stop complaining. 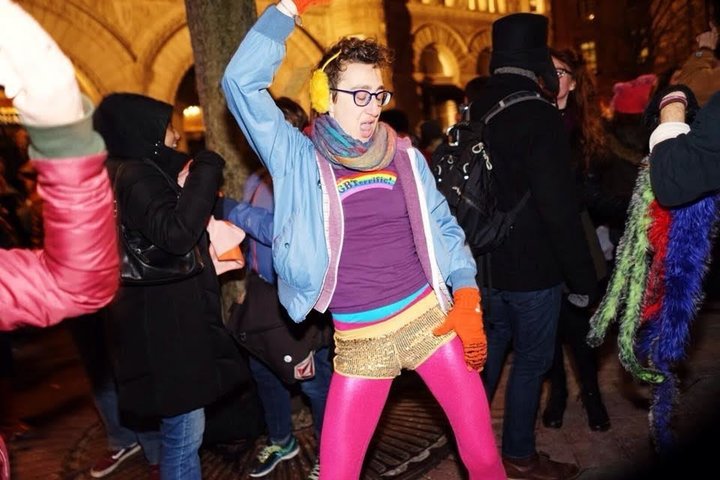 One man, an 82 year-old, nearly got into a fist fight with a protester. Maybe he was trying to sleep, but couldn’t get any rest with all the Queen and Kesha songs being blasted into the night.

The participants held signs that told Ivanka to ‘get natural’ and criticized the businesswoman for not walking her ‘children in nature’.

Police cars lined the streets of where the mother-of-three resides when in the nation’s capital, while barricades and yellow tape were placed to guard anyone from actually stepping onto the property.

However, this didn’t deter the protesters from blasting music from speakers, singing along to Queen’s rock anthem We Will Rock You and dancing on the roofs of cars.

The commotion was the boiling point for one man who was filmed by Ashley Rae Goldenberg at MRCTV, screaming at a man and woman for seemingly being involved with the perceived disruption.

The man tells the women to leave and when a friend defended her and said to the elderly man as he walked away: ‘No need to be rude like that.’

It looks like the protesters had a fun time and we should be moderately thankful they aren’t like the Black Lives Matter group who destroy things and cause violence. At least this protest was conducted in a fun way. It almost turned into one fist fight, but thankfully it diffused and the men went their own way.

While the LGBT protesters were busy dancing in the streets of a neighborhood they don’t live in, any point they made went unheard. Ivanka Trump wasn’t even home! They were dancing outside of her house and she was possibly in New York at the time.

Talk about a protest falling on deaf ears. They made all that noise and only the neighbors listened.

I don’t know what I would do if people threw a protest party outside my house. I would probably join them. I loathe protesters, but if you’re going to throw a huge party and that’s your form of protest, then I want in. You won’t see me wearing short shorts like some of the men in these pictures, but throw a party and I’m there. Host a regular protest of people screaming and looking like liberal sheep? No thanks.

If the LGBT crowd does one thing right, it’s that they enjoy throwing parties.

Now if they could just get off that man’s damn lawn, that would be great.

Maybe next time they throw a protest dance party, they may want to make sure someone is home to hear it. They don’t represent me and I don’t care about their issues, but I am thankful they are not like the other protesting groups.

Here’s some hilarious pictures. I can’t tell if this guy is dressed for Halloween as a member of The Village People, or he just likes to pull his mother’s old jean shorts up to his own belly button for fun. The girl looks like she’s 50 shades of wasted on drugs we can’t even imagine. I really hope that’s their car, because if they’re prancing around on someone’s car like that, they better know the owner. If not, then they get what they deserve if someone shoots them off it. They look like idiots, but at least they’re not shooting off guns or attacking people like Black Lives Matter and the Antifa scum.