Jeff Sessions has just smacked down[1] a practice by the Department of Justice that was exploited under the Obama administration. He is now ending handouts to leftist groups. It had become a corrupt slush fund that empowered communist groups and should have never been in place to begin with. Obama used the housing crisis to use it to fund Marxist groups and now that’s over.

This is a practice that has been going on for decades. Donating to third parties through the auspices of the Department of Justice had become a way of transferring wealth from corporations after legal settlements to far leftist groups. Obama literally funneled hundreds of millions of dollars to these non-government organizations or NGOs. They are the same vehicle by the way that George Soros employs to help topple governments and affect regime change. They are a weapon of ‘change’ and Obama was adept at using them.

President of the Government Accountability Institute, Peter Schweizer, spoke with Breitbart News Daily SiriusXX host Raheem Kassam on Monday regarding Attorney General Jeff Sessions’ decision to end Department of Justice handouts for leftist groups, which has come to be known as something of a “slush fund[3].”

For decades, through a variety of initiatives, the DOJ has insisted on donations to third parties as part of the settlements it reaches with defendants, especially corporations. In the Obama administration, this practice took on the character of a “slush fund,” which funneled hundreds of millions of dollars from these corporate defendants and put it into the hands of non-government organizations.

Recipients have included left-wing “community organizer” groups such as the National Council of La Raza, or “The Race,” a Latino racial advocacy group that supports mass illegal immigration. Other recipients include the National Urban League, the National Community Reinvestment Coalition, and NeighborWorks America, which is a congressionally chartered mortgage aid group that itself has come under widespread criticism.

Community organizing groups such as the militant illegal immigrant group La Raza, the communist National Urban League, the National Community Reinvestment Coalition and NeighborWorks America, which gave mortgage assistance to illegal aliens and those who could not afford mortgages, were on the list of those that benefited from DOJ handouts. It is an incredible victory to get this practice halted… one that should never have existed in the first place. At least one avenue of funding revolutionary insurgents within our own borders has been halted.

This all started back in the Clinton administration. I’m so not surprised. And it was dirty Eric Holder who got the ball rolling on this nifty piece of corruption. Rather than reimbursing those hurt in the banking/mortgage scandal… people who lost their homes… the money went to communists and no one did a damned thing about it. At least Sessions is stopping that now and I thank him. It’s a great move and at least will stop a few of the commies out there. Obama put radicals and politics before those he hurt. Sessions is stopping some of that and it is long overdue. 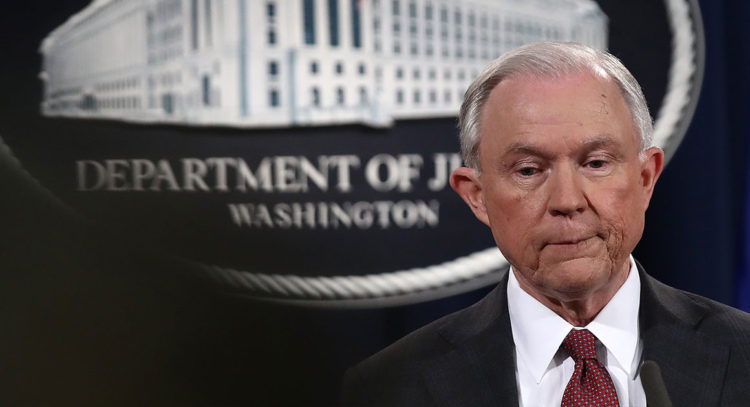