Looks like Jeff Sessions[1] and the Trump administration are prepping for a crackdown on marijuana growers, sellers and users. The Task Force on Crime Reduction and Public Safety, which is led by Attorney General Jeff Session, is getting ready to release a report this week that could link marijuana to violent crime and recommend tougher sentencing for those arrested for selling and possession, regardless of the reason. Pot is legal in eight states now… but it is still illegal at the federal level. This is a showdown over states’ rights.

I know that many people are for marijuana. I’m torn on the subject. I’m for the medical use of it, but I’m against legalizing it. However, I’m also for states’ rights, which in my book should trump federal law. But it may not play out that way this time. It looks like stricter enforcement is on the way. Federal law will win out over the states if implemented here. “The task force revolves around reducing violent crime and Sessions and other DOJ officials have been out there over the last month and explicitly the last couple of weeks talking about how immigration and marijuana increases violent crime,” said Inimai Chettiar, director of the Brennan Center’s Justice Program. 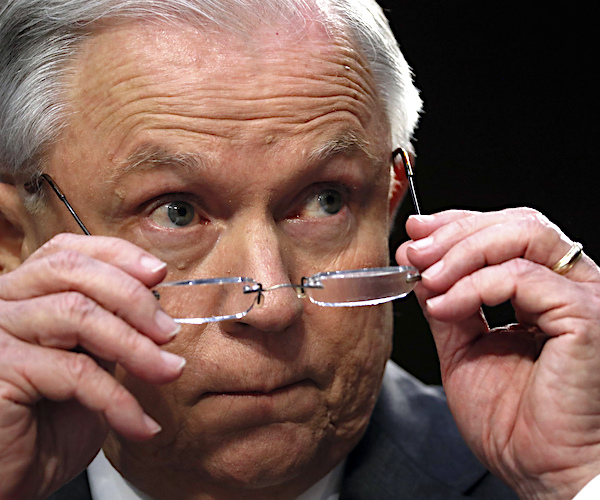 The Trump administration is readying for a crackdown on marijuana users under Attorney General Jeff Sessions.

President Trump’s Task Force on Crime Reduction and Public Safety, led by Sessions, is expected to release a report next week that criminal justice reform advocates fear will link marijuana to violent crime and recommend tougher sentences for those caught growing, selling and smoking the plant.

Sessions sent a memo in April updating the U.S. Attorney’s Offices and Department of Justice Department (DOJ) component heads on the work of the task force, which he said would be accomplished through various subcommittees. In the memo, Sessions said he has asked for initial recommendations no later than July 27.

“Task Force subcommittees will also undertake a review of existing policies in the areas of charging, sentencing, and marijuana to ensure consistency with the Department’s overall strategy on reducing violent crime and with Administration goals and priorities,” he wrote.

This potential development has criminal justice reform advocates quite concerned and upset. Sessions wrote a letter last May asking congressional leaders to do away with an amendment to the DOJ budget prohibiting the agency from using federal funds to prevent states “from implementing their own State laws that authorize the use, distribution, possession or cultivation of medical marijuana.” There’s a big part of me that agrees with this, but there’s that pesky states’ rights thingie again.

Sessions is citing a drug epidemic and a huge uptick in crime and he’s right on that point. But I’m also very apprehensive about Sessions’ expansion of the asset forfeiture laws. He says it is to take ill-gotten monies and assets from drug dealers, but I think we all know that regular Americans get caught up in that all the time and they have no legal recourse when it happens. It’s guilty till proven innocent and it’s wrong. Not to mention unconstitutional.

I find myself in agreement halfway with Rand Paul here. Legislation was introduced last month by Sens. Kirsten Gillibrand (D-NY), Cory Booker (D-NJ), Lisa Murkowski (R-AK), Al Franken (D-MN), Mike Lee (R-UT) and Rand Paul that is known as the The Compassionate Access, Research Expansion and Respect States (CARERS) Act. It would amend federal law to allow states to set their own medical marijuana policies. Then if you want to go after other users and sellers, that’s a different argument to be had.