Trump Demands Results From Sessions: ‘Where Is Our Justice Department’ On Hillary Clinton? 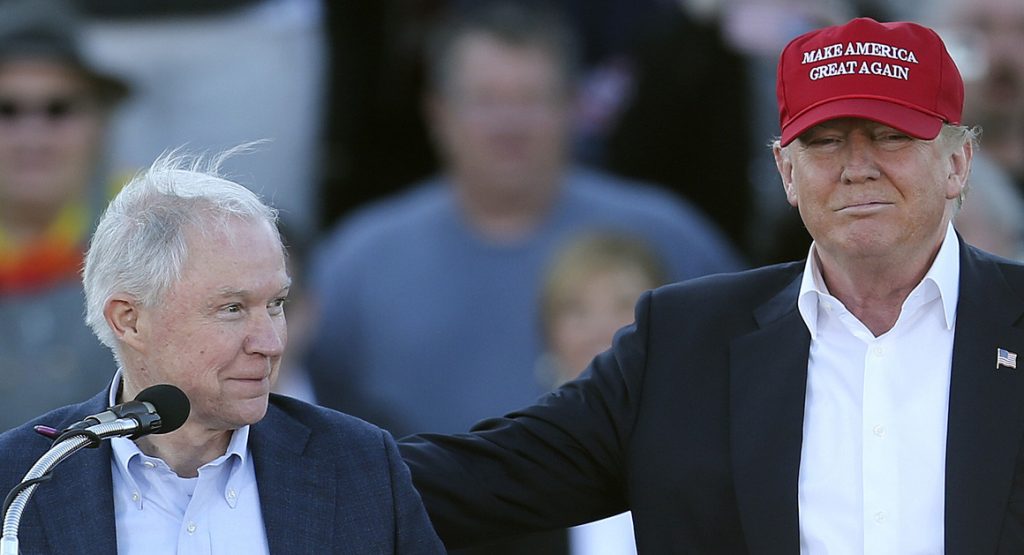 President Trump is in a bind. He has the power to drench the media with his tweeting, but he’s having trouble getting things done in one place where his options are legally limited.

Giving an interview on the Larry O’Connor Show, Larry started the conversation by telling Trump that whenever he has callers to his show, the people from states like Virginia, Maryland, Pennsylvania and West Virginia, they’re always looking for the Trump administration to keep investigating Hillary Clinton and the Uranium One scandal. In response, Trump said that as President he is “not supposed to be involved with the Justice Department” or the FBI but said:

“I look at what’s happening with the Justice Department, why aren’t they going after Hillary Clinton with her emails and with her dossier, and the kind of money… I don’t know, is it possible that they paid $12.4 million for the dossier…which is total phony, fake, fraud and how is it used? It’s very discouraging to me. “

O’Connor started his political career writing for Andrew Breitbart, writing about his experiences as a closeted conservative working in the Broadway business before leaving the magazine after Andrew died in 2013.

Attorney General Jeff Sessions has been in the crosshairs for a while, with Trump also telling media this morning that he’s not happy[2] with his inability to hone in on the Clinton Crime Family investigation and he should be sending agents to look into their 2015 deal with the Democratic National Committee that essentially hobbled any party support for Bernie while guaranteeing that Hillary earned the nomination. He tweeted:

“At some point the Justice Department, and the FBI, must do what is right and proper. The American public deserves it!”

He went on to call out the DOJ more directly:

“Major violation of Campaign Finance Laws and Money Laundering – where is our Justice Department?”

Oddly enough, in the summer, Chuck Schumer decided to step into a fight that didn’t involve him and said that Trump was bullying Jeff Sessions[3]. Well, Schumer has been bullied lately, because he’s the reason for the Diversity Lottery Visa that allowed in terrorist murderer Sayfullo Saipov. Chucky complained about Trump’s character, all of a sudden turning into a Republican, using time on the Senate floor to cry about how Trump was being mean:

“This was the first person who stumped for Donald Trump, who was with him through thick and thin. And now, even if the president has disagreements with him, which I think are ill-founded, self-centered and wrong, you don’t ridicule him in public, someone who is your close friend.”

Nobody cares about your opinion on this, Chuck. Investigate the Democrats!