One of Trump’s biggest campaign promises was building a border wall and making Mexico pay for it. Despite reiterating this promise countless times, we have been seeing him less committed to actually getting the money from our southern neighbor.

In fact, we may have to give up on the idea altogether. 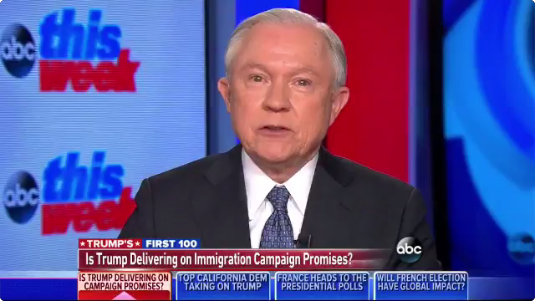 Attorney General Jeff Sessions appeared on Sunday morning’s broadcast of ABC’s This Morning and told host George Stephanopoulos that the government is going to get the wall paid for “one way or another.” Not exactly a line that inspires confidence in those who voted for Trump based on his promise to make Mexico foot the bill.

Sessions went on to explain that the American government can save $4B a year if it changed regulations and cut spending. With those kinds of savings, the wall would be paid off in 10 years. It’s exciting to think about finally having proper border security, but at the expense of taxpayer dollars which is something many wanted to avoid.

Watch the interview below:

Asked by @GStephanopoulos[2] if he has evidence Mexico will pay for wall, Sessions says, “We’re going to get it paid for one way or the other.” pic.twitter.com/CPuBDQMwV4[3]

Office of Management and Budget Director Mick Mulvaney demanded that the upcoming federal budget contain a down payment on the southern wall, promising Democrats Obamacare subsidy funding in exchange for border funding.

When I’ve spoken to Trump supporters who initially cheered on his rhetoric about Mexico paying for the wall, they have mixed feelings. Some suggest that they are okay with tax dollars paying for it as long as we get a wall built. Others said that they had wished Trump could have stuck to his campaign promise, but know that he “has to play the game” while in Washington.

What do you think? Are you okay with paying for the wall?