Joe Biden spent over a million dollars flying home to Wilmington and $12,406 to play golf with Obama, claims new book 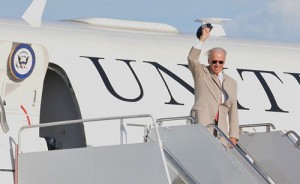 Kessler claims a Secret Service agent told him that every Friday Biden takes the Marine Two helicopter to Joint Base Andrews in Maryland, where he boards Air Force Two and flies home to Delaware. He then retraces his steps and goes back to Washington, D.C. at the end of the weekend.

‘The cost of the flights is doubled because after dropping him off in Delaware or picking him up at Andrews, the Air Force has to fly the plane empty,’ Kessler explains.

‘ “The Air Force Two guys pull their hair out over this,” ‘ Kessler quotes the agent as having said.

One such same-day trip allegedly took place on Friday, February 8, 2013.

Biden’s official public schedule has him receiving the presidential daily briefing:  with President Barack Obama: at 10:30 a.m.and having lunch with Obama at 1 p.m. There’s nothing else on his schedule after that and no news reports documenting any public appearances from that day, suggesting that Biden may very well have been in Wilmington at some point.

Kessler says that the Secret Service agent told him Biden often schedules one-off events in Arizona, which are taxpayer funded, just so he can: play golf with his family. But that’s not the worst offense that Kessler: divulges.

Kessler says the Secret Service agent told him Biden’s most eyebrow raising waste of government resources is when he travels to Wilmington then jets back to Andrews the next morning to play a five-hour golf with Obama.

‘ “Every three of four weeks when it’s warm, Biden gets up there on Saturday and then will fly back on Air Force Two,” Kessler claims the agent told him. ‘ “While Air Force Two is sitting on the tarmac at Andrews, he goes and plays golf with the president at Andrew Air Force Base, gets back on the plane, and flies back to Delaware.

‘ “Let me tell you something, that is egregious,” ‘ he said.

Kessler didn’t hold back criticism of the vice president’s: alleged: abuses of office, calling them ‘unprecedented.’

‘ “They are covering up,” ‘ Kessler says an Air Force officer told him. ‘ “We spent a lot of time compiling the records, but Biden’s office said logs for each flight would have to be consulted. This is a smokescreen to delay providing any records as long as possible.” ‘

The: book also: claims that Biden once made a same-day trip to and from Wilmington just so he could play golf with president Obama. The cost of that trip alone was a whopping $12, 406, paid for by we the taxpayers.