VIDEO: BIDEN Says Terrorism Is NOT An “Existential Threat” To America – And It’s Ticking A Lot Of People Off.

I can say with utmost certainty[1] that Joe Biden is one of the biggest douches to ever walk the planet. I could end it right there, but his douchiness is so freaking epic, I just have to share it with you. At a dinner at the University of Denver last week, Biden asked Americans if we would get hit with another terrorist attack like Boston or LA. He said, probably, yes. That’s a massive understatement. But his next sentence removed all doubt that the guy is a raving moron. First he tells us we’ll get hit by terrorists again and then he says that all Americans know in their gut that terrorism is not an existential threat to us. Uh yeah. Man, Biden must be suffering from Clinton’s faux-pneumonia.

Perhaps Joe Biden is unclear as to what ‘existential threat’ actually means. The very definition means a threat to America’s existence… something ISIS and others have vowed to accomplish. My personal theory is his hair plugs have labotomized him. Biden was speaking at the University of Denver’s annual Korbel dinner, which raises money for the School of International Studies, when he made the remarks. He was a laugh-fest alright… just not the kind you desire to be at an event. 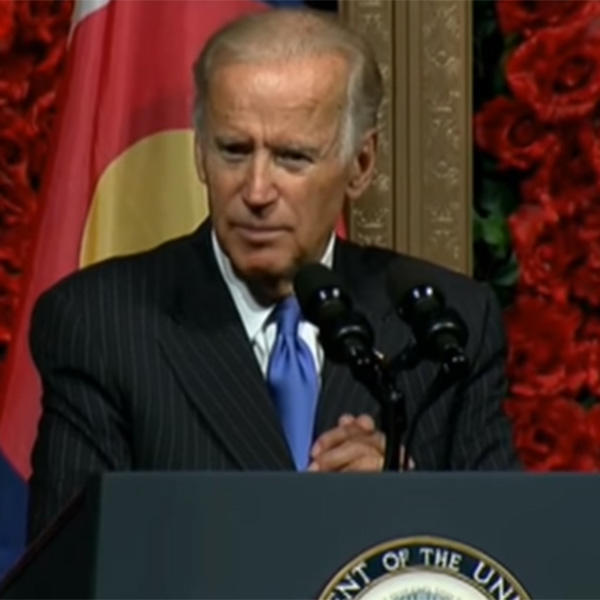 During a Thursday dinner at the University of Denver, Joe Biden announced to attendees that terrorism is not an “existential threat” to the United States’ national security.

“Will there be another attack in the United States like Boston, [like] we saw in California?” Biden asked during his speech at the University of Denver’s annual Korbel dinner. “If you had to bet, probably sometime there would be.”

“We’re a nation of 320 million people,” he continued. “American people know in their gut. There is no existential threat to the security of the United States of America.”

He also joked to the crowd that the “way to become the most popular politician in America” is to “announce you are not running for president.”

It is rumored that if Clinton has to bow out, the Democratic pick would be Biden. This guy would be a deadly disaster as a president. Not only is he massively corrupt, he’s got the IQ of a kumquat. Anyone with two functioning brain cells knows that Jihadist terrorism is an extreme existential threat to the US. It isn’t ‘if’ they hit us again, it’s ‘when’.

Islamists want to wipe us from the face of the earth, but they’ll settle for conquering us. With this airhead at the helm, he would just hand the US over within and without. So bone jarringly stupid, it is tough to wrap your head around it.