The 20 Best Quotes From Jonah Goldberg 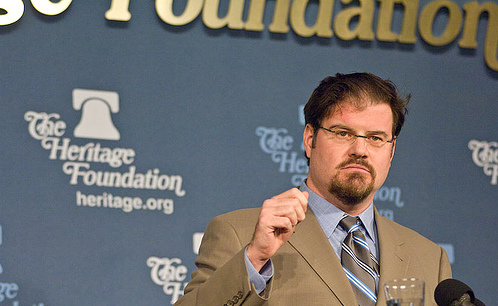 20) If there is ever a fascist takeover in America, it will come not in the form of storm troopers kicking down doors but with lawyers and social workers saying, “I’m from the government and I’m here to help.”

19) Our fear of hypocrisy is forcing us to live in a world where gluttons are fine, so long as they champion gluttony.

18) Everywhere, unthinking mobs of “independent thinkers” wield tired clichés like cudgels, pummeling those who dare question “enlightened” dogma. If “violence never solved anything,” cops wouldn’t have guns and slaves may never have been freed. If it’s better that 10 guilty men go free to spare one innocent, why not free 100 or 1,000,000? Clichés begin arguments, they don’t settle them.

17) Indeed, as libertarians are fond of pointing out, pretty much all laws come with the implicit threat of violence. Don’t believe me? Refuse to obey even the most picayune law and eventually a man in uniform with a gun on his hip is going to come talk to you about it.

15) The Founders barred the establishment of religion by the federal government — in no small part because they remembered the repression of minority sects under the state church of England. But they saw no problem with the various American states establishing their own official churches. And they certainly had no objection to official displays of religiosity. One of the first acts by the new Congress was to hire a chaplain. Until well into the nineteenth century, the largest weekly church service in the United States took place in the U.S. Capitol building. At the request of President Jefferson, music was provided at federal expense by the United States Marine Band.

14) Whenever I read liberals reporting about the goings- on of conservatives I always get the nature-documentary vibe. A liberal reporter puts on his or her Dian Fossey hat in order to attempt to write another installment of Conservatives in the Mist. I’ve followed this particular brand of reporting for years, it’s almost a fetish of mine. Most attempts fail. Of these lesser varieties, there’s fear (“Troglodytes!”), mockery (“Irrelevant troglodytes!”), condescension (“I had to explain to them they’re troglodytes.”), bewilderment (“Why don’t they understand they’re troglodytes?”), astonishment (“Dear God, they’re not all troglodytes!”), and a few combinations of all the above.

12) A rising economic tide is bad for people who live off of the poverty of others.

10) But if you try to see things like a state for a second, it’s simply unsustainable to have a libertarian immigration policy and a liberal welfare state. Ultimately, if you don’t want cops asking for your papers, you need to get rid of one or the other.

9) If we say that anyone who ‘moralizes’ must be perfect morally then we are in effect saying no one can moralize.

8) Fascism is a religion of the state. It assumes the organic unity of the body politic and longs for a national leader attuned to the will of the people. It is totalitarian in that it views everything as political and holds that any action by the state is justified to achieve the common goal. It takes responsibility for all aspects of life, including our health and well-being, and seeks to impose uniformity of thought and action, whether by force or through regulation and social pressure. Everything, including economy and religion, must be aligned with its objectives. Any rival identity is part of the “problem” and therefore defined as the enemy. I will argue that contemporary American liberalism embodies all of these aspects of fascism.

7) People ask, “Why is there poverty in the world?” It’s a silly question. Poverty is the default human condition. It is the factory preset of this mortal coil.

6) For example, one will virtually never hear that the Palmer Raids, Prohibition, or American eugenics were thoroughly progressive phenomena. These are sins America itself must atone for. Meanwhile, real or alleged “conservative” misdeeds — say McCarthyism — are always the exclusive fault of conservatives and a sign of the policies they would repeat if given power. The only culpable mistake that liberals make is failing to fight “hard enough” for their principles. Liberals are never responsible for historic misdeeds because they feel no compulsion to defend the inherent goodness of America. Conservatives, meanwhile, not only take the blame for events not of their own making that they often worked the most assiduously against, but find themselves defending liberal misdeeds in order to defend America herself.

5) Everyone moralizes. The suggestion that liberals aren’t moralizers is so preposterous it makes it hard for me to take any of them seriously when they wax indignant about “moralizers.” Almost everyday, they tell us what is moral or immoral to think and to say about race, taxes, abortion ‘ you name it. They explain it would be immoral for me to spend more of my own money on my own children when that money could be spent by government on other peoples’ children. In short, they think moralizing is fine. They just want to have a monopoly on the franchise.

4) Liberals are uncomfortable with the topic of patriotism because their core philosophical impulses are to make America a different country than it is.

3) …I have a simple answer to any American patriot who claims that there is no conflict between his love of country and his desire to hitch our fate to the United Nations: “You’re mistaken.” And, therefore, I’m thinking of adding this corollary to my General Rule of patriotism: The more intellectually consistent and pro-U.N. you are, the less patriotic you are likely to be. I haven’t thought that all the way through, but it seems right to me.

2) Just to clarify: If you go into every situation saying there’s absolutely nothing worth fighting over, you will inevitably end up on a cot sleeping next to a guy named Tiny, bringing him breakfast in his cell every morning, and spending your afternoons ironing his boxers. Or, in the case of the French, you might spend your afternoon rounding up Jews to send to Germany, but you get the point.

1) If you’ve ever known anyone with a serious addiction, the easiest thing for friends and family to do is pretend it’s not a big deal. Who wants to have a confrontation? Far easier to let things slide and have a good time. “Let’s have a nice Thanksgiving without any arguments, OK?”

The tea party is like the cousin who’s been through AA and refuses to pretend anymore. As a result, he spoils everyone’s good time. For the enablers, and others in denial, he’s the guy ruining everything, not the drunk.

Uncle Sam is the drunk and the tea partiers are the annoyingly sober — and a bit self-righteous — cousin. Measured by spending, and adjusted for inflation, the federal government has increased by more than 50 percent in 10 years. Some have enabled the drunken spending, others continue to deny it’s even a problem.

The tea party is sounding the wake-up call. If America didn’t have a problem, then there really would be good cause to be furious with the forces of sobriety. Nobody likes a party-pooper, especially the people hooked on partying.