“It is not enough for the insecure left to deem a position wrong; if it’s merely wrong, it needs to be argued about, and it can’t survive that. It must instead be morally abhorrent, so that the zealot reacts to the toxin of questioning much like a jogger coming across a decomposing body on the side of the road – it must be internalized that the correct response to such a horror is to retch, and faint, and call the authorities post-haste.This is how the leftist faith protects itself from the infection of doubt. (Meanwhile, of course, patting itself on the back for being so open-minded…)” –: Ace of Spades HQ[1]

“If it were true that conservatives were racist, sexist, homophobic, fascist, stupid, inflexible, angry, and self-righteous, shouldn’t their arguments be easy to deconstruct? Someone who is making a point out of anger, ideology, inflexibility, or resentment would presumably construct a flimsy argument. So why can’t the argument itself be dismembered rather than the speaker’s personal style or hidden motives? Why the evasions?” –: Ann Coulter[2] 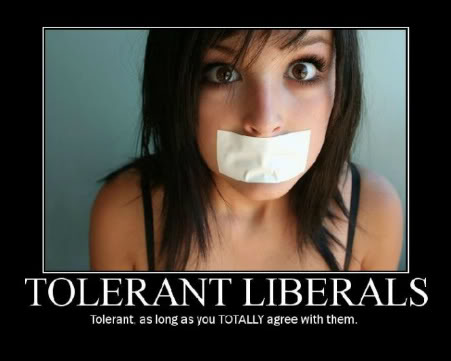 Liberalism doesn’t convince with logic. It can’t, because the policies liberals advocate don’t work. So instead, liberals have to use emotion-based ploys and attack the motives of people they disagree with while attempting to keep conservative arguments from being heard at all. Why? Because they have no good answers to questions like these.

1) A few days ago, we were hearing that the Boston Marathon bombers COULD BE conservative, which proved that the Right is evil. Now, when we know that the terrorists are Muslims, how can the same liberals be saying that it means nothing?

2) If you believe we have a “right” to things like health care, food, shelter and a good education, then doesn’t that also mean you believe we also have a right to force other people to unwillingly provide those things at gunpoint?

3) How can you simultaneously want a big government that will make decisions that have an enormous impact on the lives of every American while also saying that the character and morals of our politicians don’t matter?

4) What exactly is the “fair share” of someone’s income that he’s earned that he should be able to keep?

5) Why is it that time and time again, revenue paid to the treasury has GONE UP after we’ve cut taxes?

6) Are you pro-choice or pro-abortion? If it’s pro-choice, do you feel people should be able to choose to have an assault weapon, what kind of light bulb they use in their house or whether they’d like to put their Social Security funds into a private retirement account?

7) If corporations are so awful, greedy and bad for the country, then shouldn’t we be celebrating when they decide to close their plants here and move overseas?

8) How can liberal economists like Paul Krugman be right when they claim that our economy isn’t doing well because we aren’t spending enough money when we’re already running massive, unsustainable deficits and spending is going up every year?

9) If Republicans don’t care about the poor,: why do studies consistently show that they give more to charity than Democrats do[4]?

10) Give us a ballpark estimate: If something doesn’t change dramatically, how long do you think it will be until we have an economic crash in this country similar to the one we’re seeing in Greece or Cyprus?

11) Since we “all agree” with the idea that our level of deficit spending is “unsustainable,” what would be wrong with permanently freezing federal spending at the current level until we balance the budget by increasing revenue, cutting spending or some combination thereof?

12) If we change God’s definition of marriage to make gay marriage legal, then what’s the logical argument against polygamy or even adult siblings supposed to be?

13) In a world where people can easily change states and can, with a bit more difficulty, permanently move to other roughly comparable parts of the globe, do you really think it’s feasible over the long haul to have a tax system where 86% of the income taxes are paid by the top 25% of the income earners?

14) If you win a lawsuit that’s filed against you, why should you have to pay huge legal bills when you did nothing wrong while the person who filed the suit pays no penalty for wrongly accusing you?

15) How can you oppose putting murderers to death and be fine with killing innocent children via abortion?

16) A minimum wage raises salaries for some workers at the cost of putting other workers out of jobs entirely. What’s the acceptable ratio for that? For every 10 people who get a higher salary, how many are you willing to see lose their jobs?

17) The earth has been warming and cooling for thousands of years with temperature drops and increases that are much larger than the ones we’ve seen over the last century. Since we can’t adequately explain or model those changes, what makes us think we can say with any sort of confidence that global warming is being caused by man?

18) We live in a world where people have more choices than ever before in music, entertainment, careers, news sources and what to do with their time. Shouldn’t government mirror that trend by moving towards federalism and states’ rights instead of centralizing more and more power in Washington, DC?

19) If people in the middle class aren’t willing to pay enough in taxes to cover the government services that they use because they don’t think it’s worth the money, shouldn’t we prune back government to a level people do feel comfortable paying for in taxes?

20) If firms can get by with paying women 72 cents on the dollar for the same quality of work as men, then why don’t we see any firms with all female labor forces using those lower costs to dominate the marketplace?