Is every liberal an immoral, nasty tempered, habitual liar who accuses people of racism for fun and trashes his own country because he thinks it makes him look sophisticated? Of course, not! On the other hand, is that a fairly accurate description of most liberals in politics? Yes, it is. Most of them aren’t evil per se, but as Margaret Thatcher said[1],

“Left-wing zealots have often been prepared to ride roughshod over due process and basic considerations of fairness when they think they can get away with it. For them the ends always seems to justify the means. That is precisely how their predecessors came to create the gulag.”

Liberals view themselves as good people because they’re liberals. People who are outside of that ugly little bit of circular reasoning don’t have such a benign view of their horrible behavior. So, what reason could you have to dislike liberals? 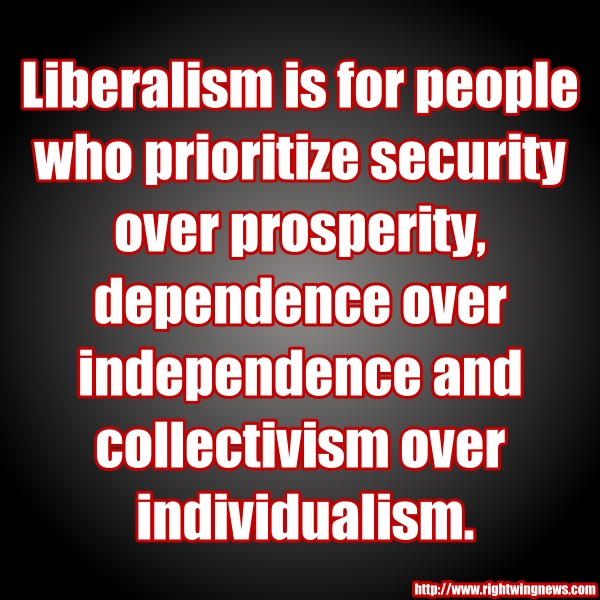 1) Only liberals would be cruel enough to pick on kids running lemonade stands with a permit, children putting on Christmas plays at school and the Boy Scouts.

2) Because the closest thing to Sodom and Gomorrah in the modern world is San Francisco and Berkeley.

3) Whether you’re talking about cop killers, terrorists, radical Islamists or dictators, all you have to do is say, “I hate America,” and liberals start to sympathize with you.

4) Liberals are actually bothered by people who do love America. On the rare occasion when you do see a liberal waving a flag, look for a camera.

5) The same people who voted Jimmy Carter and Barack Obama into office think they’re smarter than tradition, the Founding Fathers and God Himself.

6) Liberals might not want to admit it, but the world would have been a better place if Mary Jo Kopechne had crawled up out of that car instead of Ted Kennedy.

7) Only an ass could like Bill Maher, Alan Grayson or Sheila Jackson Lee.

8) Liberals believe in taking money from people who earn it, handing it out as bribes in order to get more power and then using that power to hurt the people that are giving them money.

9) The same liberal who’ll laugh at a rape joke about Sarah Palin and then attack Michele Bachmann’s family will then turn around and accuse someone else of being sexist for respectfully noting that a woman is attractive.

10) Liberals view hooking people on welfare and food stamps as a core part of their election strategy, which is terrible for the country, shows they have no character and requires more than a little hatred for poor people.

11) The dumbest, most close-minded and mean spirited people in all of politics are inevitably liberals who are convinced they’re brilliant, open-minded and compassionate because they call themselves liberals.

12) A policy that makes liberals feel superior and caring that doesn’t work and wastes billions is considered a smashing success because they genuinely DON’T CARE WHETHER THEIR POLICIES ACTUALLY HELP PEOPLE OR NOT.

13) The same liberal who pretends to be angry about Susan Smith or Casey Anthony will then turn around and give the thumbs up to women who do the same thing to their children via abortion.

14) There’s a reason why the average homeschooled kid gets a better education than he would in a public school run by liberals. It’s because the kid’s parents are interested in educating him while his liberal teachers view public schools as just another way to indoctrinate children.

15) Noam Chomsky is an America-hating creep and to think of him as some kind of genius, you have to both despise our country enough to suspend your disbelief and be largely ignorant of world history.

16) Anyone whose first reaction after a terrorist attack is, “Why do they hate us?” is just an intolerable douche.

17) Liberals talk up Hillary Clinton as the most prominent and important female politician in America; yet her entire political career is based on the fact that she married Bill Clinton. That’s actually kind of pathetic.

18) Liberals have been big supporters of slavery, Indian massacres, the KKK, eugenics, fascism, communism and Jim Crow laws. Then, down the road, after liberals finally join everyone else, they try to claim that conservatives still support all the practices that we fought liberals on from the beginning.

20) A liberal is more likely to support a man who murders a cop like Mumia Abu Jamal than cops who want to regularly patrol a bad neighborhood in force to keep the criminals from terrorizing the innocent people who live there.

21) The average middle aged Tea Partier who’s going to rallies, talking about the Constitution and calling for reduced spending cares more about “the children” than 99% of the liberals out there who demand that we support one stupid program after the other “for the children.”

22) You have to be a horrible human being to be okay with terrorists like Bill Ayers teaching kids at a college.

23) Because liberals are unable to ever admit they’re wrong, they systematically ruin and destroy everything they become involved with and then either point the finger elsewhere or demand even more government involvement to fix the problems they created.