“Does anybody think it’s OK to have 40-year-old trees growing through the roofs of dilapidated houses?” — Detroit’s Emergency Manager Kevyn Orr[1]

“A few years ago, the nonpartisan Bay Area Center for Voting Research rated Detroit as the most liberal city in America.” — Michael Tanner[2] 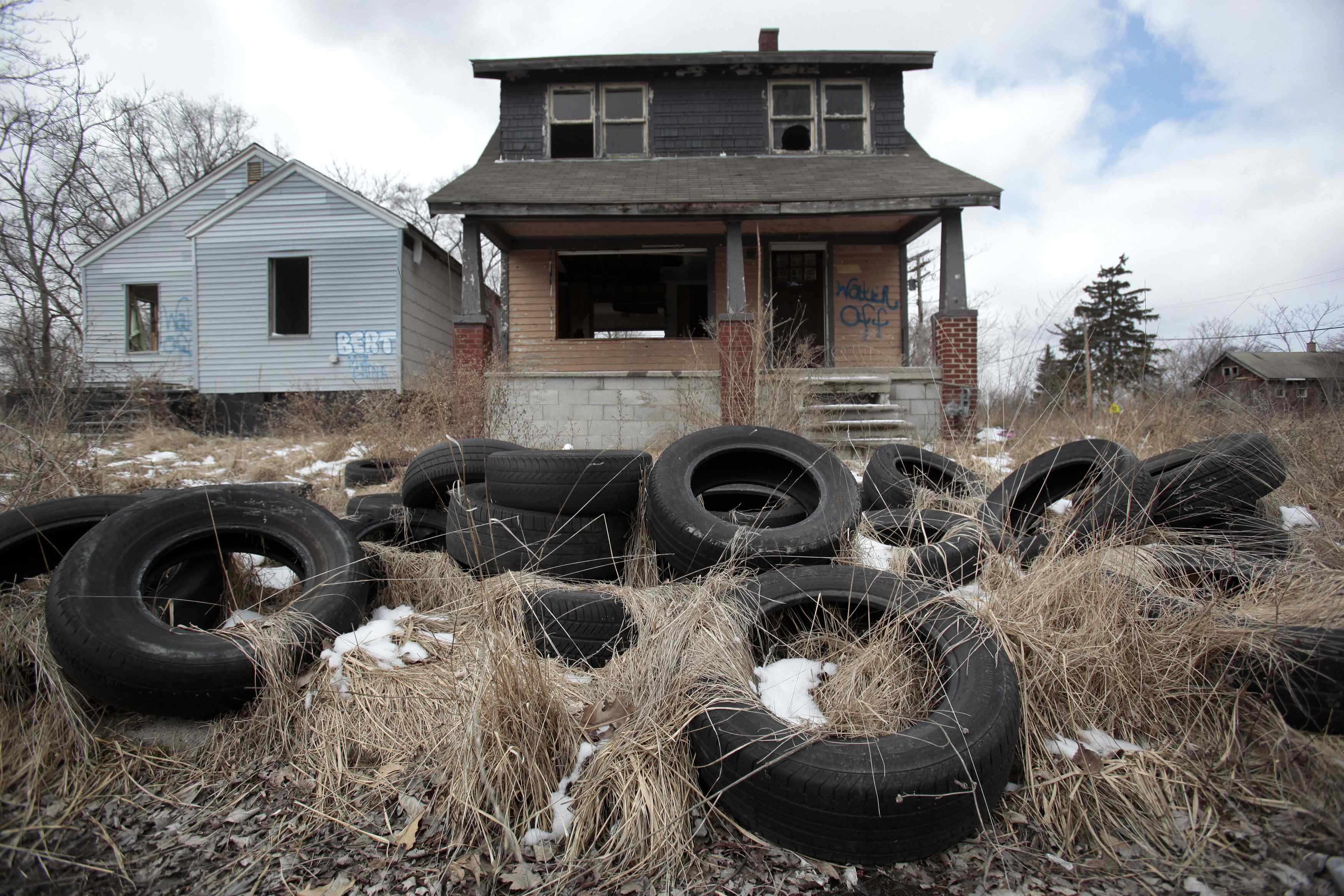 Detroit was once one of the world’s great cities. It was the 4th largest metropolis in America, jobs were plentiful because of the auto industry, and Motown even kept it on the cutting edge musically.

Unfortunately, from 1962 until the present day, the mayor of Detroit has been a Democrat.

Detroit’s population has dropped from 1.8 million to just over 700,000, the unemployment rate is over 50% if you count the people who’ve given up on finding jobs, property values have dropped so much you can buy homes in the crime-ridden city for $500, and Detroit has gone bankrupt.

How did Democrats kill one of the most prosperous cities in America? With the same sort of unfettered liberalism that Democrats like Barack Obama, Harry Reid, and Nancy Pelosi want to foist on the rest of the nation.

1) Unions crippled the auto industry: The Big 3 automakers could afford unions when they practically had a monopoly on auto production in the United States. However, once they started facing real competition from overseas, the unions made them less and less competitive. The unions forced the companies to pay out more than market value for their workers, put stifling work rules in place that made flexibility and innovation difficult, and created generous pension plans that are proving to be unsustainable. This wouldn’t have been possible without a symbiotic relationship between the unions and the Democrats in government who tied the hands of the Big 3 automakers and simply wouldn’t allow them to get rid of the unions that were slowly strangling them to death. Eventually because of the unions, the Big 3 automakers had to deal with significantly larger costs per car than their overseas competitors and they took it out of the only place they could: the cars. As the quality of their products dropped, their competitors took an ever larger share of their market and there were fewer jobs to go around. If you want to know why the “Motor City” is up on cinder blocks in Michigan’s front yard, this is where it started.

2) White citizens were demonized until they left: Detroit was a heavily segregated city and in 1967, there were black riots. After that, white flight to the suburbs began. This was dramatically exacerbated when Coleman Young became Detroit’s first black mayor in 1972. Young was cut from the same cloth as men like Al Sharpton and Jesse Jackson, but unlike the two of them, he actually had power. Young systematically drove white government employees out of their jobs so they could be replaced by blacks, was hostile to the white suburbs, and was generally perceived as anti-white. Naturally, a lot of white people just left, which reduced the population and significantly cut into the tax base. Today, Detroit is a 7.9% white city and if he were alive and kicking, that would probably suit Coleman Young just fine.

3) Out-of-control crime helped drive much of the black middle class out of the city: Ever heard of “Devil’s Night?” It’s the night before Halloween and in Detroit, fires are set all over the city. Combine the sort of criminal mentality that produces an unofficial “holiday” like that with a sky high unemployment rate and Draconian laws designed to make it difficult for law abiding citizens to arm themselves and it’s not a surprise that crime is a problem in Detroit. However, the issue goes much deeper than that. In case you haven’t noticed, in a conflict between a cop and a criminal, the hearts of liberals almost always seem to bleed for the thug. Combine that with the liberal tendency, when money gets tight, to cut essential programs instead of their perks and the goodies they hand out to their supporters and you end up with a police department that is both dramatically underfunded and completely incompetent.

“The size of the police force in Detroit has been cut by about 40 percent over the past decade,” “it takes (the police) an average of 58 minutes to respond” to a call and the “police solve less than 10 percent of the crimes that are committed in Detroit.”

4) Reckless government spending bankrupted the city: Detroit’s tax base has been plunging like an anvil dropped into the Marianas Trench and so, in true liberal fashion, liberals have raised taxes to make up for it instead of cutting spending. “The city’s per-capita tax burden is the highest in Michigan[5]. Detroit has the country’s highest property taxes on homes, the top commercial property tax and the second-highest industrial property tax.” Unfortunately for Detroit, you can’t get blood from a stone. As jobs and wealth fled the city, there was simply less cash available for big government programs, pensions, and the incredibly generous, but almost completely unfunded union health care program. It’s fantastic that the city paid “80 percent to 100 percent of retirees’ medical costs,” but 99.6% of those costs were unfunded. As Obamacare supporters should have learned by now, it’s a lot easier for politicians to make big promises about what they’re going to give you than it is to back them up in the real world.

5) The government is completely incompetent: Ever notice that the bigger government seems to get, the less it does anything well? Citizens of Detroit could tell you all about that. The school system is horrible, which explains why a staggering 47% of the population is illiterate[6]. In addition, 40% of the street lights don’t work, only about 1/3 of the ambulances are running, and 2/3 of the parks have been closed since 2008. Just to give you an idea of its priorities, an independent report in 2012 suggested the city fire 80% of the Water and Sewage Department including a horseshoer” that it has on staff even though it has NO HORSES.[7]. How did the union respond to that report? “They don’t have enough people as it is right now. They are just dreaming to think they can operate that plant with less.” Detroit may not have enough police, ambulances, or competent teachers, but if you ever need a horseshoe in the Motor City, they’ve got you covered.