$50 Million Down the Tubes: How Conservative PACs Go Wrong

My latest PJ Media column is called, $50 Million Down the Tubes: How Conservative PACs Go Wrong[1]. Here’s an excerpt from the column. 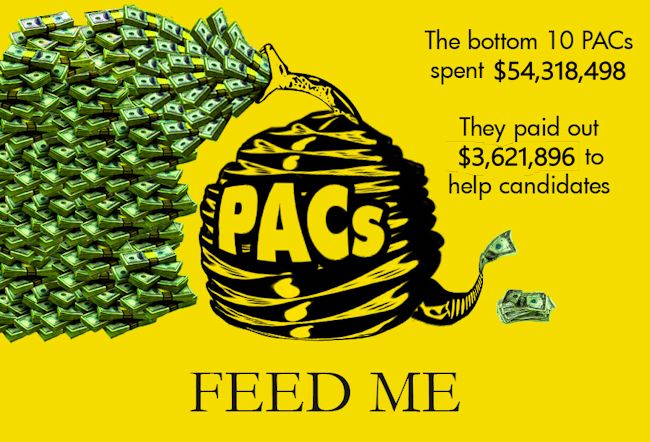 This is how I imagine it all starts.

You have an activist busting his behind to help conservatives and he thinks, “Wow, just think of what I could accomplish if I were able to do this full time!” Then, he manages to break the shackles of his day job and becomes a full-time activist running his own PAC. He’s living the dream! However, at that moment, he starts to realize that activism is now a job and his house payment, groceries and kids’ education all depend on it. Suddenly, his priorities start to change as an activist. It’s not just what’s best for the cause anymore; it is what’s the best thing he can do for the cause that gets him paid. It’s a subtle shift, a very defensible shift, but it sets the table for what comes next.

Soon, he starts to realize that beyond the FEC ensuring that he’s sticking to the letter of the law, no one is checking behind him. People on his side of the aisle are very reluctant to write stories that make conservative PACs look bad and if a liberal puts out a story that makes him look awful, he can always say, “What do you expect? Do you think he’d tell you I’m doing a great job?” Then he hears about other people in the movement, the type of money they’re making and some of the things they’re getting away with. That makes it easy to rationalize. He tells himself, “Everybody does it,” and how can people get mad at him for engaging in something that’s standard operating procedure in the business?

Next thing you know, an activist who started out with the best of intentions has begun looking at activism as just another job instead of a calling. As he becomes more cynical and jaded, maybe he raises money for candidates or events and never gives them any of it. Maybe his PAC makes millions and fills his pockets, but almost none of the money he raises goes to help conservative candidates and causes. Maybe he comes to look at activism as nothing more than another for-profit business.

Maybe, just maybe, that’s how you explain the sort of numbers that you’ll see in an article Right Wing News released earlier this week called “50 Million Down The Tubes: How 17 Conservative PACs Are Spending Their Money[3].”

How bad were the numbers for the 10 conservative PACs on the bottom?

The goal of our piece wasn’t to show that all conservative PACs are bad because we certainly don’t believe that. We just wanted to give people a chance to see how much of the money they were giving to these PACs was being spent on campaigns via independent expenditures and direct contributions. After all, when people give money to a conservative PAC, they’re typically doing it because they believe it will be used to help put more candidates they agree with into office. Electing candidates is also primarily what these PACs brag about. Yet, here are the numbers for the bottom 10 PACs researched in our report.

Rooting through the finances of PACs is about two steps below quantum physics on the “complicated scale.” It means digging through complex reports, dealing with filing errors, and navigating grey areas in the law. That means smart and well-meaning people can sometimes disagree about how much of the money that a PAC collects should be eaten up in overhead. However, we should all be able to agree that any PAC spending a dime or less out of every dollar on its primary mission, which is electing Republican candidates, simply isn’t getting the job done.

That doesn’t necessarily mean they’re “scam PACs” or that everybody that works there is a bad person. What it does mean is that conservatives shouldn’t send any PAC their money just because it happens to endorse candidates we like or takes positions we agree with. There is a myriad of conservative radio hosts and websites that do the exact same thing and they’re not asking for any money in return. For PACs to distinguish themselves, they need to make serious financial investments into getting candidates elected. If they’re not willing or able to do that, then they typically bring very little to the table for the donors that trust them with their money.

Until those of us on the Right stop turning a blind eye to PACs that are being just as irresponsible with donor money as the government is with our tax dollars, then conservatives will continue to be stuck fighting crucial political battles with one hand tied behind our backs.