On Behalf of the Patriarchy, Liberal Feminists Can Kiss Off 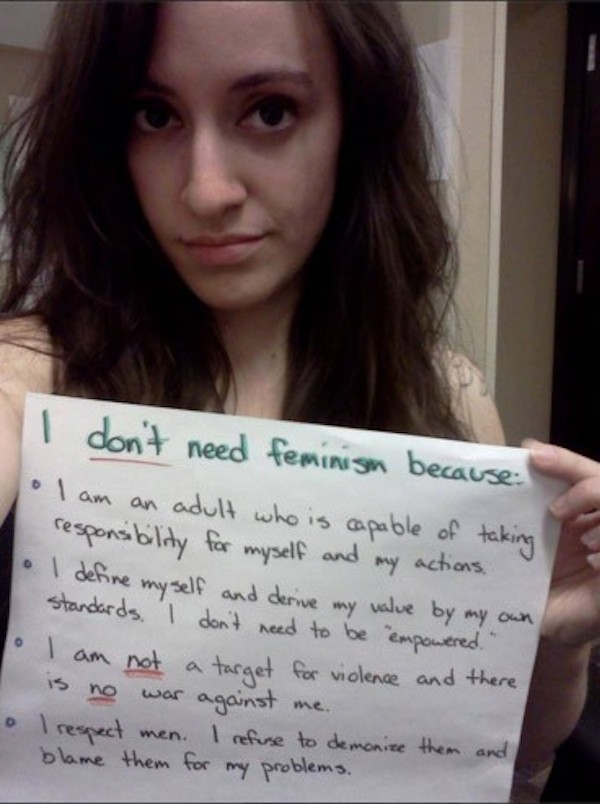 After making America suffer through six years of, “That’s racist,” because we elected a black President, liberals are just dying to repeat the experience. That’s why they want to elect Hillary Clinton, so we can be nagged with, “That’s sexist,” every time she’s criticized for doing something stupid.

As a side note, isn’t Hillary Clinton’s existence proof that there’s no patriarchy? After all, her whole career was built on staying married to a serial philanderer, she accomplished nothing of note as a senator or as Secretary of State and she has about as much personality as a Pet Rock; yet she’s considered a serious candidate for the Presidency. If a bad joke like Hillary Clinton can make it this far, it’s hard to argue that the deck is stacked against women. Of course, that won’t stop the foul, angry trench harpies that make up the feminist movement from trying.

Liberal feminists seem to have confused extreme bitterness and being offended by everything with superpowers. They’re angry; so what they say must be taken seriously! Of course, what do they have to be so angry about? Just kidding. We know what they’re so angry about — EVERYTHING. They’re mad women are being treated as sexual objects AND they’re mad women are being “slut shamed.” They’re infuriated that there aren’t more women in government and incensed that conservative women are being elected. They’re furious because they say there’s a “war on women” and they’re outraged that chivalrous men hold doors open for them.

Geeze, can’t you feminists make up your mind?

Wait, can I say that? Oh, yeah, I can because liberal feminists are humorless scolds seething with hatred for all men who are more masculine than Chris Hayes; so in the immortal words of Hillary Clinton, “What difference does it make?” To be fair, liberal feminists are seething with hatred for conservative women as well; so it’s not just men that they hate. In fact, if liberal guys are making gross sexist comments about conservative women, they can usually expect liberal feminists to be right there cheering them on if they haven’t already joined in.

Because there are conservative women who are fulfilling the initial promise of feminism in a way that left-wing women never have – and liberal feminists HATE THEM for it.

Is there a better example of what feminism should actually be all about than Sarah Palin? She pulled herself up by the bootstraps to become a successful governor of Alaska and a VP candidate; she has helped to get many other female candidates elected to office. She’s been a best-selling author and had a successful TV show. She’s gorgeous, charismatic, wealthy, has millions of diehard fans, is still married to her first husband and has 5 kids. Meanwhile, in her spare time, she cooks, runs marathons and shoots caribou in the Alaskan wilderness. What an incredible role model for young women….except liberal feminists hate her because she isn’t bitter, doesn’t hate men and doesn’t believe in aborting babies.

Speaking of aborting babies, when did the feminist movement change from wanting abortion to be “safe, legal and rare” to “abort ‘em all and let God sort ‘em out?” When a prominent feminist like Amanda Marcotte[2] compares getting an abortion to having a cavity removed and calls babies “time-sucking monsters,” do any of her friends have the courage to tell her she sounds like Hitler’s girlfriend?

Along similar lines, there are feminists saying we should stop putting women in jail for any reason[3], claiming all sex between men and woman is rape[4], and who think that all women who have children are failures[5]. If you’re in a roomful of feminists, not only are the kooks who believe this stupidity probably going to be there, it’s more likely than not that they’ll be the ones speaking from the stage before they’re interviewed later by MSNBC.

Wait, is it promoting “rape culture” to criticize liberal feminists? After all, that does seem to be their big trump card these days. If you don’t like them or agree with them, then somehow you’re pro-rape. As if EVERYBODY isn’t against rape other than a few amoral animals. Rape is sick, it’s wrong, it’s depraved and anyone who’s guilty of it, from the female teachers seducing their underage students, to date rapists, to the President of the United States (You can ask Juanita Broaddrick about that) deserves to be guillotined in Times Square for what they’ve done. So, you’re a feminist against rape? Congratulations, that makes you just as much against rape as the average man. Feel free to join the club and stop accusing other people of fomenting “rape culture” because they listened to a Robin Thicke song last week or because they believe the police should be handling rape accusations, not colleges. You want to see a society with a real rape culture? Go to Egypt, Pakistan, or for that matter, most of the countries in the Middle East other than Israel. Those are real rape cultures – and it doesn’t take any phony studies[6] to prove it.

So liberal feminists want a society where men and women are perfectly equal? Okay, then start paying for men’s dinners when you go out on a date – and while you’re at it, make sure there are as many men as women graduating from college. Also, let’s see if we can equalize the number of women and men who die by homicide every year. Oh, yeah, if it takes two to make a child, when do men get an equal say in whether there’s an abortion? Those complaints are just as fair and valid as the whining that liberal feminists do, but most of us realize that these are all first world problems and everyone, male or female, has it pretty good in America.

Men should want a country where their wives and daughters can achieve their full potential, whether it’s as a CEO, President of the United States, or as a stay-at-home mother to a brood of kids. Women should reject the victimhood and loathing of men inherent in liberal feminism and instead should take the words of a conservative feminist like Dana Loesch to heart, “I will not have my sons grow up in a world where the new original sin is being a man.”