Dear American Muslims, Can We Have An Honest Talk?

My latest Townhall column is called, Dear American Muslims, Can We Have An Honest Talk?[1] Here’s an excerpt from the column. 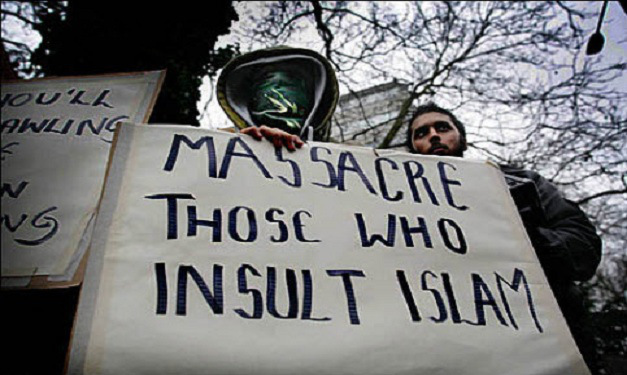 On 9/11, one of my roommates was a Turkish pilot. Not only was he sent home that day, he didn’t work again for weeks. In one moment he was just a guy with a religion that most Americans had no strong opinions about. In the next, there were people who thought he was potentially dangerous because of what he believed.

I’m sure a lot of Muslims have gone through that and since then, every other day it seems like there’s a story in the news about a Muslim blowing himself up, murdering innocent people or taking sex slaves. Ironically, most of the victims of these Muslims are other Muslims. So, if you’re a peaceful Muslim who loves his country, I’m sure it’s easy to feel under siege.

Personally, I think most American Muslims are good people; they’re anti-terrorist; they’re anti-Sharia law and they want to raise their families in peace and pursue the American Dream just like everybody else. I condemn in the strongest of terms, not just hate crimes and harassment, but the smearing of all Muslims with the same brush. Every Muslim who seems like a nice guy isn’t engaging in Taqiyya as he secretly plans to kill the infidels. Moreover, telling Muslims who mean us no harm that if they understood their own religion, they’d be murdering the rest of us is one of the dumbest things I’ve ever heard.

That being said, switching gears, the second dumbest thing I’ve ever heard is robotically repeating, “Islam is a religion of peace,” every time radical Muslims murder someone because of their religion. We know these radicals are murdering people because of their religion since they go out of their way to tell us this. You can certainly argue that groups like ISIS, Al-Qaeda, Hezbollah, Hamas and Boko Haram are misinterpreting Islam or perverting the Koran, but that doesn’t change the fact that they are Muslims who believe they’re being faithful to their religion as they rape, murder, and enslave the innocent in the name of Allah.

Worse yet, a significant minority of Muslims across the world agree with what they’re doing.

It would be fair to say that ISIS is generally unpopular in the Muslim world, but it’s just as fair to note that this still means that enormous numbers of Muslims back ISIS. In just 11 countries, there appears to be north of 60 million Muslims at a minimum[3] who approve of an Islamic organization that’s every bit as evil as the Nazis.

Then there’s Sharia law, which is absolutely incompatible with Western democracy and civilized behavior; yet it’s extremely popular across much of the Muslim world[4]. Ninety nine percent of Muslims in Afghanistan, 91% in Iraq, 84% in Pakistan and 74% of Muslims in Egypt want Sharia to be the official law of their country.

Moreover, look at what’s happening in Europe right now. There are so many sexual assaults by Muslim migrants that they are actually putting classes in place to teach them that it’s not okay to rape women[5].

When he first arrived in Europe, Abdu Osman Kelifa, a Muslim asylum seeker from the Horn of Africa, was shocked to see women in skimpy clothes drinking alcohol and kissing in public. Back home, he said, only prostitutes do that, and in locally made movies couples “only hug but never kiss.”

Confused, Mr. Kelifa volunteered to take part in a pioneering and, in some quarters, controversial program that seeks to prevent sexual and other violence by helping male immigrants from societies that are largely segregated or in which women show neither flesh nor public affection to adapt to more open European societies.

…A course manual sets out a simple rule that all asylum seekers need to learn and follow: “To force someone into sex is not permitted in Norway, even when you are married to that person.”

It skirts the issue of religious differences, noting that while Norway has long been largely Christian, it is “not religion that sets the laws” and that, whatever a person’s faith, “the rules and laws nevertheless have to be followed.”

…In Denmark, lawmakers are pushing to have such sex education included in mandatory language classes for refugees. The German region of Bavaria, the main entry point to Germany for asylum seekers, is already experimenting with such classes at a shelter for teenage migrants in the town of Passau.

The ugly truth is that these problems are specific to Islam. If you bring 100,000 Muslims into your country, you’re going to have more people who can’t assimilate, more terrorist attacks and more rapes than you will if you bring in 100,000 Jews, Buddhists, Sikhs, Scientologists, Evangelical Christians, Mormons or Hindus.

Again, this doesn’t mean all Muslims are bad. In fact, most Muslims pretty clearly aren’t bad people. Unfortunately, we have proven to be completely incapable of telling “moderate” Muslims from “radicals.” If you think our government’s vetting can tell Muhammad, the freedom-loving entrepreneur who loves America from Muhammad the wannabe terrorist who dreams of blowing himself up in a synagogue or a day care one day, you’re kidding yourself. So, when someone gets worried that we’re going to let radical Muslims into our country, can we stop pretending that they’re smearing moderates? A lot of moderate Muslims came here in the first place to get away from the crazies in their own religion; so why do we want to risk bringing those same crazies here by the thousands?

Because of our inability to screen out radicals, we’d be better off doing anything and everything possible to cut back on the number of Muslims we allow to immigrate to our country. That doesn’t mean an outright ban, which would be impossible to implement, but we should certainly try to minimize the number of refugees and immigrants we allow into our country from Muslim nations as much as possible.

If you want to dramatically cut the risk of having another 9/11 in the next few years and want to reduce the number of American women who will be raped, reducing the number of Muslims we allow to live in our country long-term would be the most effective thing we could do.