Everything You Need To Know About Socialism in 20 Quotes

My latest Townhall column is called, Everything You Need To Know About Socialism in 20 Quotes[1]. Here’s an excerpt from the column. 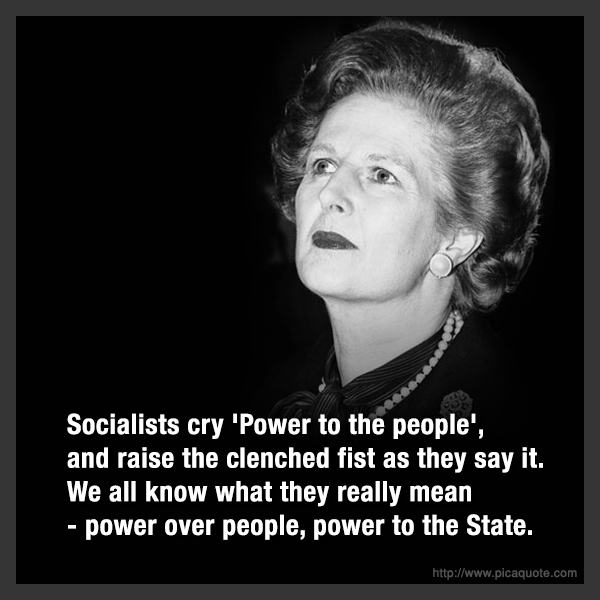 1) “The problem with socialism is that you eventually run out of other people’s money.” — Margaret Thatcher

2) “It is the common error of Socialists to overlook the natural indolence of mankind; their tendency to be passive, to be the slaves of habit, to persist indefinitely in a course once chosen. Let them once attain any state of existence which they consider tolerable, and the danger to be apprehended is that they will thenceforth stagnate; will not exert themselves to improve, and by letting their faculties rust, will lose even the energy required to preserve them from deterioration. Competition may not be the best conceivable stimulus, but it is at present a necessary one, and no one can foresee the time when it will not be indispensable to progress.” — John Stuart Mill

3) “Socialism is when government’s taking care of you, you send all your money to the government, the government decides how to spend it instead of letting the people spend it and make all those decisions.” — Bob Latta

4) “We are socialists, we are enemies of today’s capitalistic economic system for the exploitation of the economically weak, with its unfair salaries, with its unseemly evaluation of a human being according to wealth and property instead of responsibility and performance, and we are all determined to destroy this system under all conditions.” — Adolf Hitler

6) “The goal of socialism is communism.” — Vladimir Lenin

7) “This isn’t new. Those who favor socialism always make the moral case for it. The truth is, maybe they actually believe in it, but in the real world, socialism harms, it weakens the economies of countries that have tried it. It just does. Weaker economies hurt everybody in them. Socialism kills incentive, opportunity, freedom. It is the opposite of what America is all about. Look, socialism always harms the people it claims to help the most. It handicaps them, leaving them weaker, less self-determined, less free.” — Bobby Jindal

8) “When plunder becomes a way of life for a group of men in a society, over the course of time they create for themselves a legal system that authorizes it and a moral code that glorifies it.” — Frédéric Bastiat

9) “Socialism states that you owe me something simply because I exist. Capitalism, by contrast, results in a sort of reality-forced altruism: I may not want to help you, I may dislike you, but if I don’t give you a product or service you want, I will starve. Voluntary exchange is more moral than forced redistribution.” — Ben Shapiro

11) “In 1989, for two hours’ labor at the minimum wage, an American worker could obtain, at a corner Sizzler, a feast more opulent, more nutritionally rich and gastronomically diverse than anything available to almost all the citizens of the socialist world (including the elite) at almost any price.” — David Horowitz

12) “In practice, socialism didn’t work. But socialism could never have worked because it is based on false premises about human psychology and society, and gross ignorance of human economy.” — David Horowitz

13) “I believe that all forms of socialism have been proven over time to result in a loss of both economic and civil liberties, with increasing poverty.” — John Mackey

16) “Socialism proposes no adequate substitute for the motive of enlightened selfishness that today is at the basis of all human labor and effort, enterprise and new activity.” — William Howard Taft

17) “Socialism provides safety in numbers. And that’s OK, if you don’t mind trading your name—your identity and individualism — for a number.” — Jarod Kintz

19) “Socialists cry ‘Power to the people’, and raise the clenched fist as they say it. We all know what they really mean–power over people, power to the State.” — Margaret Thatcher