The parents of Boy Scouts across the country may be too cowed by political correctness to say it, but the chances that teen Scouts are going to be bad-touched in the woods by Scoutmasters just shot through the roof[1]. That shouldn’t be a shocking statement; it’s just common sense. Sending gay men into the woods with teenage boys is just as stupid and irresponsible as sending straight men into the woods with teenage girls. 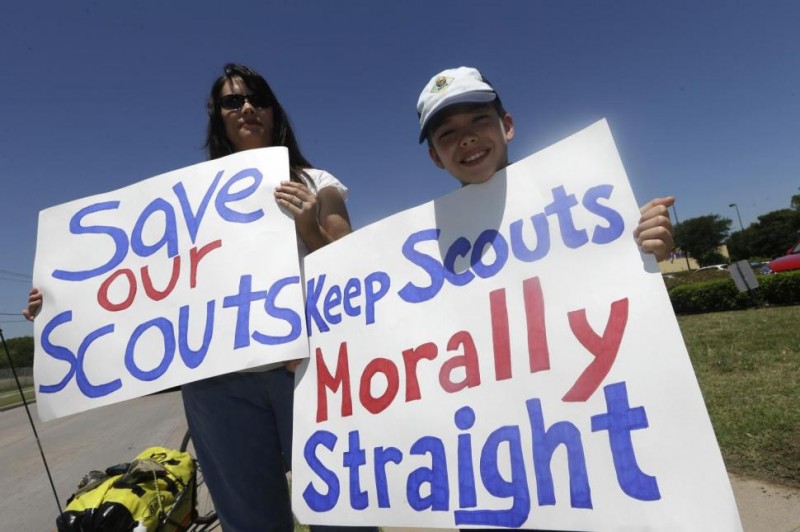 Let me note at this point that some people may say, “You’re claiming gay men are all pedophiles.”

For example, we’ve seen lots of stories lately about adult female teachers having sex with their teen-age students. Most of these women could be better described as sexual predators than pedophiles because they’re not targeting young children, they’re targeting teens. Are most gay Scoutmasters going to be sexually attracted to a 10 year old boy? Probably not. Are they going to be sexually attracted to a good-looking 16 year old Scout? Yes, they are and that will be an issue for the parents of many of those Scouts.

Getting beyond that, the Boy Scouts are deeply tied into religious groups. Yes, they are saying not every group has to allow gay scoutmasters — FOR NOW — but the handwriting is on the wall. The groups that don’t have gay Scoutmasters will be harassed, sued and undermined by the national organization until they give in — and some of them just aren’t going to do that.

Mormons make up 20% of the Scouts, they are unshakably opposed to doing anything with gay scoutmasters and if they leave, they’ll leave en masse.

Roughly another million kids take part in the Scouts via chartered organizations through the Catholic, Methodist, Presbyterian, Lutheran and Baptist churches.

Altogether, these groups make up as much as 70% of the Boy Scout membership.

That’s a huge problem because the people pushing the hardest for gay scoutmasters are liberal gays who care nothing about the Boy Scouts, but who hate Christians and want to see the organization used as a vehicle to push homosexuality on kids. The number of people these liberals are going to bring into the Scouts is infinitesimal. Meanwhile, the harder the Scouts push homosexuality, the more Christians they’re going to drive out of the organization. Combine that with the parents who aren’t going to want to send their teenage sons out in the woods with a gay Scoutmaster and you can expect the Scouts to bleed membership from here on out.

At some point, the Mormon Church is going to leave the Boy Scouts and either create a competing group or sign on with an organization that doesn’t have gay Scoutmasters. That might be next month or five years from now, but it seems highly likely that it’s going to happen. Other Christians and parents who share their concerns will slowly, but surely join them or just give up on the whole concept. How that will play out over the long-term is hard to say, but what’s not hard to say is that the Boy Scouts are on the backside of the mountain as an organization and they’re unlikely to ever come back from this mistake. It’s sad to see a great organization that has done so much good for young men slowly strangle itself to death via political correctness, but it made its bed and it’s going to have to lie in it.