I Like Donald Trump, But I Don’t Think He Can Win A General Election

My latest Townhall column is called, I Like Donald Trump, But I Don’t Think He Can Win A General Election[1]. Here’s an except from the column. 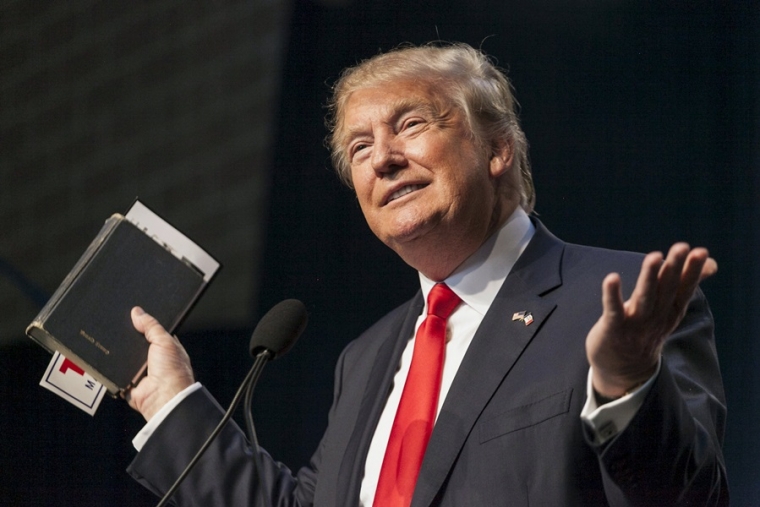 These days, people on the Right seem to be polarized: Either they think Donald Trump is a brilliant, unstoppable ball of winning or they believe he’s the classiest, most luxurious demagogue to come along in decades. I have a bit of a different take.

I’ve read and enjoyed Donald Trump’s books, he was nothing but gracious to me when we met, I have friends I like and respect a great deal who work for him and I even used a picture of the two of us together on the Christmas cards I sent out this year.

Moreover, Trump’s willingness to take on issues ignored by the Republican Party, his lack of political correctness and the real genius he has for identifying important issues other candidates aren’t talking about and bringing them to the forefront are nothing short of amazing. Additionally, no one should underestimate a strong leader whose name has been synonymous with business success for over a decade, especially when he’d beat the whole rest of the Democrat and Republican fields combined in the famous, “Who would you want to have a beer with?” test. As I’ve said before[3], other Republicans can learn a lot from Trump and anyone who can’t see that is a fool.

However, even though I would certainly vote for Trump if he’s the nominee and would also work hard to get him elected, I have two major qualms about him. The first is that I question how conservative he’d be if he gets into office. Given his mixed track record on conservative issues, I doubt if even the most diehard Trump fans would hold that against me, but the bigger problem is that I just don’t think he can win a general election.

There are a number of reasons for that, but the largest one is that Trump couldn’t be financially competitive. That may seem bizarre since we’re talking about a man whose name is synonymous with wealth, but even Donald Trump doesn’t have enough money to self-finance a general election run at the presidency. Keep in mind that Hillary Clinton and the Super Pacs supporting her will spend north of 3 BILLION DOLLARS. On the other hand, if you take away the value of his name, Trump’s net worth is probably somewhere in the 3-4 billion dollar range and most of it is tied up in assets. Ask yourself if Donald Trump is really going to sell Trump Tower, the Trump International Hotel, his golf courses and his other properties at cut rate prices to pour the money into his political campaign. It may not even be possible, but even if it is, do you really think Trump would liquidate most of his fortune to run for President? When you consider that Trump has been so tight-fisted during the primary that he might run the first Presidential campaign ever to turn a profit, it seems very unlikely.

On top of that, keep in mind that Donald Trump has made the fact that he’s self-funding a central part of his messaging. If Trump were to win and change his mind, not only would it hurt him with his core supporters, it probably wouldn’t be all that effective. Trump’s fund raising operation so far has understandably been mediocre and the Super Pacs that were gearing up to support him were asked to stand down. Those Super Pacs were particularly important because there are hard limits on what rich supporters can give to campaigns, but not on what they can give to a Super Pac. Without major help from Super PACs, it’s highly unlikely that Donald Trump could win a general election.

Imagine a campaign where Hillary and her Super Pacs spend more than 3 billion dollars and Trump barely manages to stockpile 500 million in his war chest. In every swing state, Hillary would have a better get out the vote operation, better staffing and she would be able to blanket the airwaves with her ads while Trump couldn’t compete. In a race like that, Hillary could win in a walk EVEN IF she goes to prison over her email server.

Getting beyond the money issue, most people would agree that Trump has done so well because he’s been dominant when it comes to attracting earned media. However, a big part of Trump’s success in that area has been as a result of relatively friendly blanket coverage from conservative radio hosts and online media. In a general election, those outlets will be much smaller factors and they definitely wouldn’t be capable of delivering the election to Trump.

Of course, Trump has also gotten plenty of attention from the mainstream media as well, but do you really think the MSM liberals will allow themselves to be used to beat Hillary in 2016? Sure, they’re happy to run “Can you believe he said this?” stories about Trump now when they think he’s causing problems for Republicans, but if he becomes the nominee, every story about Trump will be a straight-up hit piece. If even that doesn’t work, they’ll just find some excuse to stop covering him altogether if that’s what it takes to beat him. This is why it’s so important for a Republican to have a huge war chest because you NEVER get a fair shake from the MSM. Even the Left’s favorite Republican, John McCain, was savaged by the press when he ran for President. In fact, any Republican who hopes to win a general election by getting his message out to the voters through ABC, NBC, CBS, CNN, MSNBC, the Washington Post, New York Times, etc. isdoomed before he starts. Unfortunately, that’s the difficult position Donald Trump would be in during a general election campaign.

On top of all that, you have to look at Trump’s demographic strengths and weaknesses. Trump does extremely well with blue collar workers and men with high school degrees. There are also some indications that he is particularly attractive to people who normally don’t vote, but those voters are by their very nature tough to count on in an election. Trump might also do better than Republicans generally do with black men. However, beyond that, almost every indicator is negative. Trump does poorly with women, he will guarantee a huge Hispanic turnout for the Democrats and given the rabid hatred for him in some quarters of the Republican Party, it seems likely he’ll bleed even more GOP support than he would bring in from the Democrats.

Furthermore, although approval numbers don’t generally mean a lot this early in the game, they are relevant when someone is as well-known as Trump. Right now, Trump has a 34% favorable rating and a 57% unfavorable rating[4]. Candidates don’t win races with numbers that bad and since Trump is already a known quantity, it’s going to be EXTREMELY difficult to get his numbers up. Fairly or unfairly, when people know enough about you to form an opinion and have already decided they don’t like you, it’s very hard to change their minds.

Last but not least, Trump may be the single most gaffe-prone candidate in history, primarily because no other candidate could survive saying even a fraction of the off-the-wall things that he does. It just goes on and on. McCain’s not a war hero because he was captured, blood coming out of her “whatever,” “schlonged,” saying we should shut down part of the Internet, calling for killing the relatives of terrorists, “How stupid are the people of Iowa?,” incorrectly claiming a group of black pastors was showing up to endorse him when it wasn’t, having his spokesman express a desire to use nukes on TV, a gazillion tweets calling people “losers” for saying something he didn’t like – and probably a half dozen other now forgotten mistakes or goofs with a larger point (No, “thousands” of Muslims in New Jersey didn’t cheer 911 and, yes, Trump could have discussed Mexican criminals coming over the border without offending people if he’d used better language). As someone who writes about politics for a living, Trump is extremely entertaining, but most Americans want a sober and serious President, not someone who’s “fun” because he might say the Pope got “schlonged” or Angela Merkel has blood coming out of her “whatever.” I do think Donald Trump is qualified to be President, but he’s not “presidential” and you can be certain that if he’s the nominee, there would be many, many more gaffes before the election in November.

Just to reiterate, not only do I like and respect Donald Trump, but if he does turn out to be our nominee, I will support him all the way and hope he proves this column wrong. That being said, Hillary is VERY beatable, she’s essentially promising to go EVEN FURTHER than Obama and I fear for the future of this country if we throw away this opportunity. I think Cruz would beat her handily, Christie could probably pull it off and, God help us all, maybe even Rubio would defeat Hillary Clinton. Since I don’t think Donald Trump can get the job done, regrettably I cannot support him in the primary.