I Lost My Health Insurance Because Of Obamacare 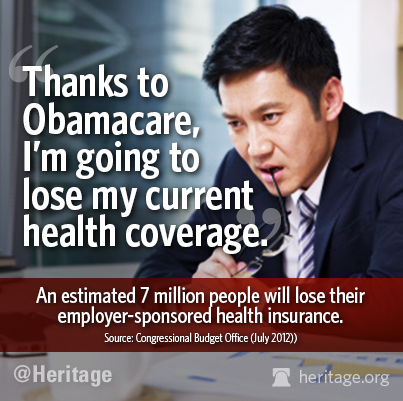 Well, that promise turned out not to be true and I can tell you that from personal experience.

Originally, my health insurance provider told me that my plan wasn’t going to be canceled. The agent just said it wouldn’t qualify under Obamacare and so, I’d have to pay a tax to keep it. That tax is a bit more substantial than you may have heard. If you don’t have health insurance that meets the standards of Obamacare or isn’t covered at all, the tax isn’t just $95 next year; it’s $95 or 1% of your income — whichever is higher. Of course, that’s just what it costs on year one. By 2016, the tax will be $695 per person or 2.5% of your income, whichever is higher.

Incidentally, that breaks another famous promise that Barack Obama made when he was originally running for office. Back then, he said,: “I can make a firm pledge. Under my plan, no family making less than $250,000 a year will see any form of tax increase. Not your income tax, not your payroll tax, not your capital gains taxes, not any of your taxes.”

It’s also worth noting that tax wouldn’t be what I would pay for refusing to buy insurance; that’s the tax I would pay to continue being insured under a plan that doesn’t meet the standards of the Affordable Care Act. Unfortunately, I didn’t even have that option. A few days ago, I received a robo-call from my health insurance provider telling me there are going to be changes to my health care plan beginning at the start of the year because of the Affordable Care Act. After calling in, I found that the “change” is that my plan is being cancelled.

It’s difficult to blame my insurance company for that. After all, it’s hard for a service to be viable when the government forces consumers who buy it to pay a massive new tax for the privilege.

So, since my old plan is going away, I asked what the cheapest comparable plan that meets the standards of the Affordable Care Act will be. As you might suspect, there is a substantial price increase involved.

That breaks yet another famous promise that Barack Obama made,: “I will sign a universal health care bill into law by the end of my first term as president that will cover every American and cut the cost of a typical family’s premium by up to $2,500 a year.”

Setting aside the fact that it’s projected that more than 30 million Americans won’t be covered under Obamacare, most Americans will be paying more. Insurance premiums are going up under Obamacare in: 45 out of 50 states. As bad as that sounds, I still feel fortunate after some of the stories that have been in the news. When you hear about people who are going to be paying an extra$6000 a year out of $47,000 in income: or: people whose rates are going up tenfold from $54 a month to $591, it’s hard to complain.

Yet and still, the high prices people are being asked to pay today are just the beginning. The massive new bureaucracy, reams of red tape, and reduced competition caused by Obamacare are going to cause insurance costs to soar into the stratosphere over the next few years. In return for unnecessarily throwing away more of our income on health insurance, we’ll face doctor shortages, a reduced quality of care, and death panels arbitrarily cutting off and delaying effective treatments to save the government money. Meanwhile, the government workers implementing the plan don’t have Obamacare while Congress and its aides are illegally getting a 75% subsidy that the rest of us are being forced to pay for on top of the higher costs created by the law.

Tens of millions of Americans are losing their insurance, paying more out of pocket, and being forced to buy plans they never wanted in the first place by people who are exempt from the law they’re forcing on the public. The law couldn’t pass today and had Obama told the truth instead of lying shamelessly, even Democrats would have never voted for this law in the first place. A law built on lies that hurts tens of millions of Americans just to further Barack Obama’s political goals is immoral, unjust, and should not be allowed to stand.