This week-end, my business partner Tiffiny Ruegner and I went out to the Bundy Ranch in Nevada.

Unfortunately, because the traffic was abysmal, we got there AFTER the crowd, which was riddled with cowboys and militia, freed Bundy’s cows and the BLM fled the scene. So, we missed a lot of the excitement. 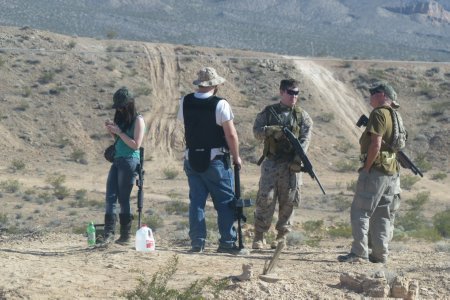 Still, being on the scene, talking to some of the people involved and listening to Cliven Bundy speak gave me a little more perspective on the whole situation.

First off, is Cliven Bundy a deadbeat crank?

He’s just a man who decided that he didn’t want to lose his ranch when the government arbitrarily changed the rules in order to deliberately destroy his business. 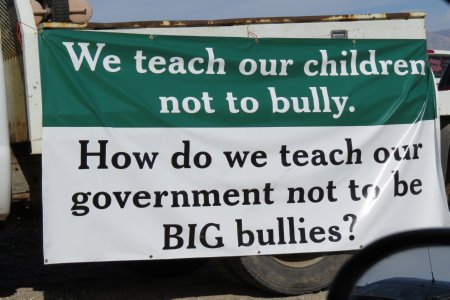 “Years ago, I used to have 52 neighboring ranchers,” he said. “I’m the last man standing. How come? Because BLM regulated these people off the land and out of business.” 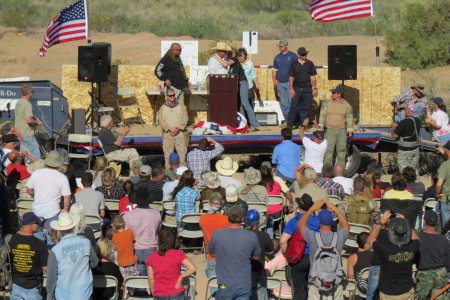 This is why the whole question of whether he “paid his fees” is a red herring. The government changed the rules in an effort to drive people like him out of business. Even if he had paid, he’d still have had to break the rules to survive. That’s the position bureaucrats put him in. Obey our silly, arbitrary rules designed to protect a desert tortoise that no one can show he’s hurting in any way or give up your way of life. 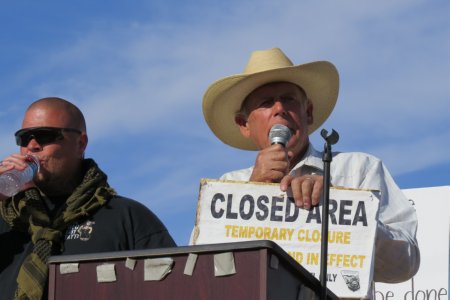 While I was at #BundyRanch[6], Bundy gave a choked up speech thanking the crowd for saving his cows. He invited them to stay, eat & celebrate

In the same situation most people, myself included, would have paid the fees — but, we also would have sold our ranches and gone out of business.

Cliven Bundy had to become an outlaw to continue working on a ranch his family had owned since 1870 and he chose to go that way. 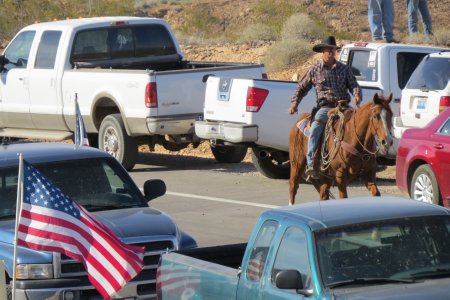 Does that make him right? Does that make him admirable? Not necessarily. Maybe it just makes him stubborn or foolish. Whatever the case may be, that’s the way he chose to go and anyone who tries to boil this down to a case of Bundy “not paying fees” is missing the point. Whether he paid or didn’t pay, the government still changed the rules in the middle of the game and is determined to take his ranch.

That being said, if this were nothing but a land dispute between a rancher and the Bureau of Land Management, it wouldn’t have become a national story. 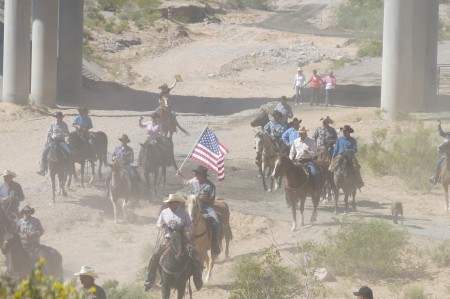 Photo taken by Bill Goode and used with his permission.

What really caught people’s attention was the thuggish behavior of the BLM officials. They sent hundreds of agents into the area armed with military equipment. They had helicopters flying around. They tased Bundy’s son and tackled his sister. Bundy and others say there were snipers watching his family and the crowd. Multiple people at the Bundy ranch told me BLM officers pointed guns at the protesters and threatened them with dogs. 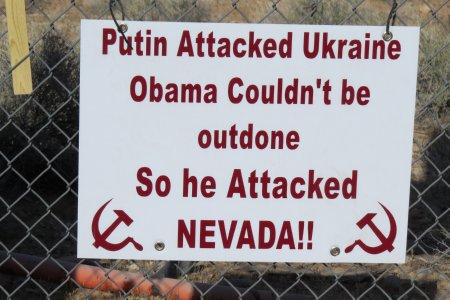 Since when are American citizens supposed to live in fear of jackbooted thugs from the government showing up and shooting them over tortoises? 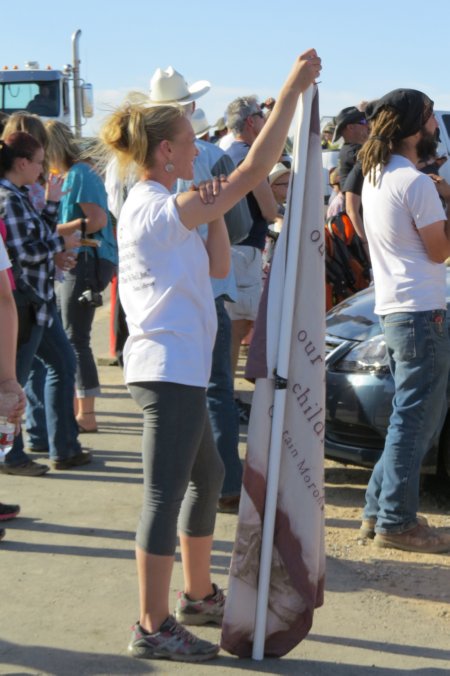 The Posse Comitatus Act is supposed to keep the military from policing this country — and that’s appropriate. So, when we have government agencies training like the military, carrying military hardware and acting like our military in a foreign country on our soil, what’s the difference?

Americans shouldn’t have to live under the threat on impending violence from our own government — and there are a lot of people who won’t. There were quite a few people armed with handguns and rifles at the Bundy Ranch and there wasn’t anybody complaining about it. In fact, if you want to know why the BLM officers left without Cliven Bundy’s cows, it’s because they would have had to hurt people to take those cows and they didn’t have a monopoly on force. That means if they had started hurting people, there were American citizens there with the ability to hurt them back. 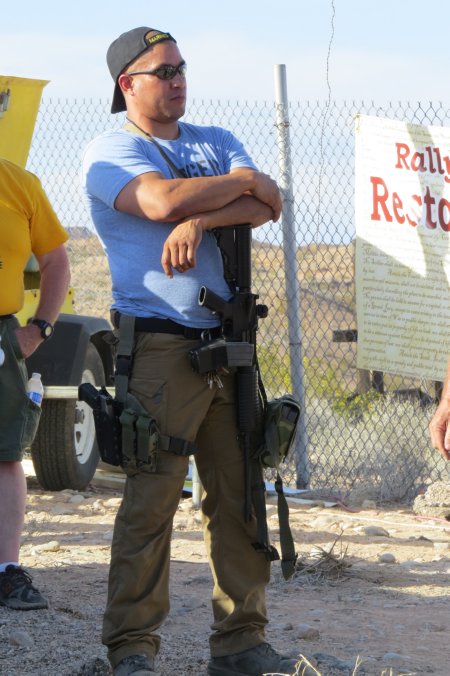 Some people might say that’s a bad thing. A lot of the time, I might even agree with them. But when the government can’t even handle a dispute over cattle without coming across like it’s ready to engage in “Ruby Ridge part 2,” it’s good for the government to get a reminder of why the Founders put the 2nd Amendment in place.

Thank God no one got hurt…this time. Maybe we won’t be so lucky next time.

So maybe instead of obsessing over Cliven Bundy’s “range fees,” which wouldn’t change anything if they were paid, perhaps we should be talking about the real issues that created this case.

What’s more important? Human beings or turtles? Who should own this sort of public land in Nevada and other states? The state government or the federal government? Why shouldn’t state governments have control of their own land? Have our government agencies become overly militarized? Is this sort of aggressive display of force appropriate in a case like this? 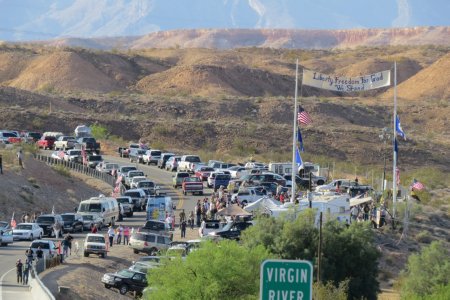 Whatever you think of Cliven Bundy, he didn’t make this into a national news story that caused thousands of people to drive hours across the desert to support him. The Bureau of Land Management did that with the way it behaved and if the Obama Administration won’t address its thuggish behavior, then Republicans in Congress should do the honors just to let the BLM know SOMEONE will hold it accountable. Even if you think Cliven Bundy is 100% at fault, I would hope you could at least agree that the thuggish behavior of our own government is unacceptable. 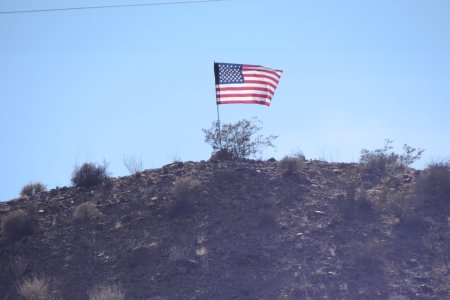