Interviewing Katie Kieffer About Her New Book, “Let Me Be Clear: Barack Obama’s War on Millennials, and One Woman’s Case for Hope”

Katie Kieffer’s new book is called, Let Me Be Clear: Barack Obama’s War on Millennials, and One Woman’s Case for Hope[1]. Last week, Katie and I talked about her new book. What follows is a slightly edited transcript of our conversation. 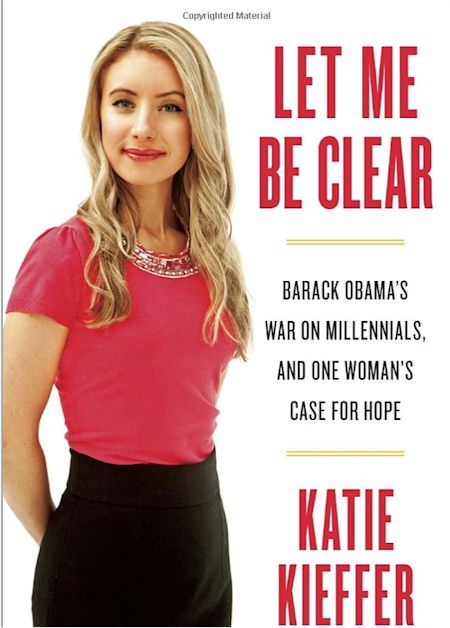 You talked about growing up in a house with guns.:  So let me ask you as a young woman and a millennial, why do you think you need a gun?:

I think women deserve the option to choose to defend themselves with a firearm because it is the most effective and modern tool of self-defense.:  So not every woman is going to choose that, but every woman deserves to have that choice readily available to her. : I’ve seen from growing up in a culture of responsible gun owners that they’re great for self-defense, but also I know that a culture of guns does not turn young people into criminals.

I feel like those people don’t have access to all of the information because if they read the facts, if they read Chapter 9 of my book, for example, Our Gun Taboos, they would quickly realize that all the facts point to responsible, law abiding citizens carrying firearms are one of the best tools to prevent mass killings: in our country. So we need to do everything we can to defend the 2nd Amendment and our natural God-given right to bear arms because the facts show that when law abiding citizens carry firearms, our society is a safer place to live.

Now as a woman I have to ask you who’s really waging a war on women?:  Democrats or Republicans?:

I don’t believe there is a war on women in particular. I believe that there are certain policies that are negatively impacting both men and women.:  And I’m really not sure why we even talk about the war on women to be honest with you because men and women are equally damaged by the socialistic policies that we have out there.:  And that’s why I chose to write this book and title it The War on Millennials because you see that young men — we have a complete lack of respect for men as father figures, complete lack of respect for the value that men bring to society.:  There’s an all-out assault on young people’s natural right to self-defend, our right to be free to practice our religion, our faith, speak openly, and to start our own businesses.:  And that really impacts all genders.

The economy has been bad for Barack Obama’s entire presidency, but tell people who may not be aware why it’s been even worse for millennials.:

So I would say because we didn’t have that and also because young people — our generation has taken out a historically high level of student debt.:  So not only are we graduating to not find jobs, there’s over 15% of millennials who are unemployed — but also we’re finding that we are burdened with this very high level of student debt.:  And to go along with it an education that is, as I point out, unfortunately deteriorating because the federal government and liberal professors have become so involved that we’re not getting the high level of education that we need to succeed in the workplace.

Now, also final question, Katie Kieffer.:  If a 22-year old Independent came up to you and said, “Katie, I’m not sure whom to vote for.:  I’m not sure which party I should support. Why would Republicans be better for me as a millennial than Democrats?”:  What would you tell him?

But the facts — there are a lot of facts about the economy in this book and one of my favorite chapters to show young people how this all works is the chapter called “The New Shacking Up.”:  And in that chapter I utilize my own background in commercial real estate to trace this whole recession way back to Carter. And it’s fascinating because most young people don’t realize that the facts speak for themselves and Bill Clinton and Barack Obama are primarily responsible for: the: housing policies which really unleashed this entire recession.:  And it’s a fun chapter to read because you get to read about Henry Cisneros who was just about as big of a playboy as Bill Clinton. But you realize, oh, my gosh, these politicians are just scoundrels and they get in so far over their head.:  Clinton and Obama did not have any business experience and when you have someone without business experience,: you are going to be in for a wild ride.

And one final question since you brought it up — what is the new shacking up?:

The new shacking up is a term that I invented to refer to the fact that over 1/3 of millennials are living at home with their parents right now.:  We have not seen that number in our country for over 40 years.:  So it’s an all-time high.:  Neither the parents nor the young people like this practice.:  It’s something that they choose against their will and it’s unlike the normal shacking up.:  So I’m trying to use that term to point out that this is a new trend that we have in this country.

And it’s not something that young people or their parents are choosing.:  We do need to dig ourselves out of this.:  And the best way to do it is to change our economic policy.:  So, yeah, we can do all of that.

Katie Kieffer, thank you so much. :

Once again, Katie’s new book is called Let Me Be Clear: Barack Obama’s War on Millennials, and One Woman’s Case for Hope[1].