These days, every time a woman in politics gets recognized for her looks or dares to be even a little sexually provocative, the “how dare she” crew comes out of the woodwork. Ironically, given that the standard feminist line these days is that women should screw like promiscuous men and then whinge about “slut shaming” if anyone complains, most kvetching about women being admired for their looks comes from the Left. Don’t get me wrong, it happens on the Right, too, but it’s just much more prevalent on the Left.

Well, the latest hotty to stir up the ire of the “how dare she” crew is Megyn Kelly for her spread in GQ. Here’s the sextacular Megyn Kelly pic that’s drawing attention and some of Mediaite’s commentary[1]: 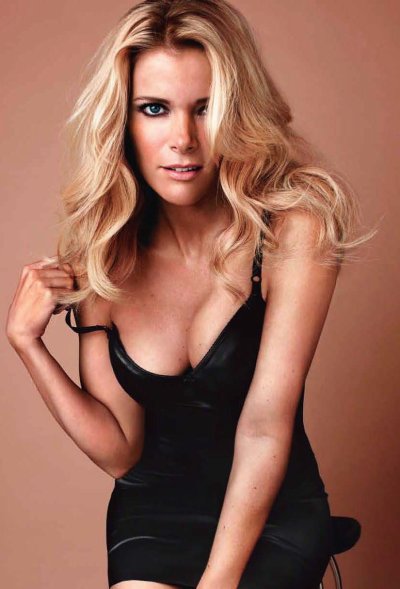 Megyn Kelly Feeds The Beast Of Objectification, Strips Down For GQ

But there’s still something strangely uncomfortable about the idea that an anchor who seems to want to be taken seriously will strip down for an easy attention-grab, and that really isn’t Kelly’s fault. She can do as she pleases when her ratings are what they are, but it’s the angle that GQ takes on her work that makes it problematic. GQ reporter Greg Veis deliberately makes the crux of his piece that she is “hot,” and that people watch her because she is “hot” and not because she is a good reporter. Half the interview is about how proud colleague Brit Hume apparently was of a false rumor that the two were having an affair—a not-very-interesting topic the interviewer seems to employ to create the perception— based on absolutely no evidence— that Kelly is seen as little more than an ornament in her work environment. The other questions imply that her following consists exclusively of ravenous males and, well, there is one serious question on the influence Glenn Beck has on America. The questions asked and the way her answers are edited are not Kelly’s fault. It is certainly possible to interview her with the respect she deserves, and it’s been done many times before. Veis opted not to.

And no, the pictures don’t exonerate him for trivializing her journalistic prowess. Had a male media figure stripped down similarly, they would have been treated just as if the shoot had been done wearing coats. We know this because it has happened before: no one thought less of Andrew Breitbart for doing a nude photo shoot with Time. Keith Olbermann wasn’t objectified into irrelevance for actively campaigning to become the 2004 Playgirl Sexiest Newscaster (and winning). Because they are male, their exploration of a public semi-sexual persona was treated as comedy, a recurring theme with male sexuality, notable exceptions (Jon Hamm) aside. Not that this is quite fair to the males involved, either— there is a balance between treating sexuality and respect as mutually exclusive and treating it as a punchline, and neither extreme is healthy, though the latter clearly preferable in a business where institutional sexism has only recently begun to erode. Blaming the victim— the kneejerk reaction when seeing pictures like this of Kelly, or those of Breitbart, or Olbermann’s admittedly intentionally humorous campaign— for bringing their physical appeal into the conversation is not going to solve the problem.

First off, let’s note that we’re talking about GQ[2] here. It actually has a women’s section[3] that’s full of lingerie and bikini shots. It has excerpts like,

Adriana Lima: Could the world’s sexiest underwear model really be so pure?

So, should anyone really be stunned that they’re asking Megyn Kelly questions about being hot? Sure, they also have more of a straight politics section, but as someone who has a link blog[4] that’s a mixture of politics, bikini shots, and general interest links, let me clue you in: A fun “Isn’t she hot?” piece on Megyn Kelly is going to draw a lot more eyeballs than a straight political piece in a mag like GQ.

That’s a very feminine point of view, by the way. I mean, I sincerely doubt that the Old Spice Guy[5] stays up nights worrying that women like him for his body as opposed to his witty one liners. For an example that hits closer to home, Sean Hannity[6] probably isn’t concerned about the possibility that women tune into his show because they think he’s attractive, not because they like what he has to say. Of course — and this is key — Sean Hannity[6] also probably doesn’t worry that his career might be over when his looks fade. Although they loathe to admit it, there are women in politics who have this fear.

Is there any truth to that fear? Yes, probably a little for the more marginal talents — but also, less than most people think.

You see, most people believe that if you’re talented and work hard, you’ll succeed. That’s not necessarily true, especially in politics. In actuality, being talented and working hard are generally just prerequisites for success. Beyond that, you need something that makes you stand out. Being attractive does that for women — and it can help quite a bit. It’s no coincidence that so many of the big name conservative women in politics are attractive. Will being an attractive woman help get you on TV? Absolutely. Will it make more people watch your vlogs, read your books, or read your blogs? Yes, it will.

Again, is that fair? Well, let me answer a question with a question: Is it fair that Shaquille O’Neal has gotten rich playing basketball when there are hard working people who are just as talented who’ve never made it because they were a foot shorter? Is it fair that I couldn’t get a job as a Chippendales dancer? Is it fair that 98% of the people you see in a Hollywood movie are more attractive than the average American you pass on the street? Is it fair that a radio host who works every bit as hard as Rush Limbaugh[7], but has 30 less IQ points, can’t ever reach his level of success? Fair, unfair, it’s just the way the world works. Whether people like it or not, that’s how things are and how they will continue to be. Everybody has different skills and abilities; we just have to use those skills and abilities the best way we can. That’s why I take the decidedly male perspective that if a woman is beautiful, she should use that gift to her best advantage.

Let me also add something else: In my experience, men may tune into a woman initially because of her looks, but if they like what she has to say, they’ll hang around and keep listening. Just to name the two most prominent examples, look at Ann Coulter[8] and Michelle Malkin[9]. Did their looks help their careers? Unquestionably — and they know it. There’s a reason Ann Coulter likes to wear mini-skirts. There’s a reason Michelle Malkin made this cheerleading video back in her Hot Air[10] days,

Has sex appeal played a role in their success? Sure. But, would anyone argue that they’re not “taken seriously” because of it? Ann Coulter[8] has cranked out seven books that have appeared on the New York Times Best Seller List. They’re not books full of pictures either. Along similar lines, Michelle Malkin’s[11] last book, Culture of Corruption: Obama and His Team of Tax Cheats, Crooks, and Cronies,[12] spent 6 weeks at #1. If that doesn’t constitute being “taken seriously,” then there’s almost no political commentator in America that’s “taken seriously.”

Besides, what’s the alternative? Are men supposed to admire attractive women everywhere except in politics? Good luck with that. Should attractive women in politics wear burqas so that a man can only admire her for her mind? It would at least be nice if people refrained from taking cheap shots at women’s looks or making grotesque sexualized comments about them, but if the Internet wasn’t full of inadequate people trying to make themselves feel better about their flagging lives by delivering low blows to more successful people, it wouldn’t be the Internet. The world is what it is and there’s nothing wrong with women who accept reality and take full advantage of it.