Last night, we had one of the most bizarre moments of a shutdown crisis that featured Democrats beating up on veterans and kids with cancer while nut-job-squish Peter King spent weeks ranting about Ted Cruz like he was Hitler. After John Boehner led the House GOP into a wood chipper, infuriated the base, and waved the white flag to Obama, House conservatives gave him a standing ovation. Why, he tried so hard in a tough situation! Bless his little heart! 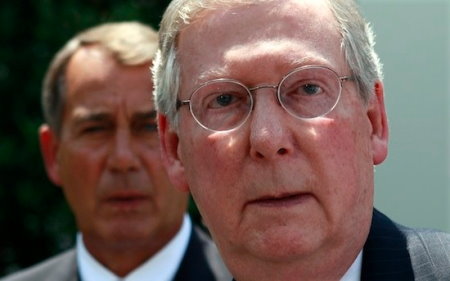 Meanwhile, under Mitch McConnell’s leadership, Republicans in the Senate actively worked to sabotage the House Republicans. They told the world the GOP was shutting down the government and complained about Ted Cruz. Super squishes Kelly Ayotte and Olympia Snowe tried to cut a deal with Harry Reid while McConnell was MIA. Eventually, McConnell did show back up to lick Harry Reid’s boots in return for a 2.9 billion dollar earmark[2]. Of course, McConnell denies that he has anything to do with it and the finger has been pointed at Obama and/or Lamar Alexander and Diane Feinstein, depending on whom you believe. So, the same Senate “leader” who did absolutely nothing to help during the entire shutdown fight gets a 2.9 billion dollar kickback to his state the year before an election. It’s almost like a little thank you from the Democrats for appeasing Harry Reid, isn’t it? Well, guess coincidences happen, don’t they?

After what we’ve just seen for the last couple of weeks in the GOP, it would be easy to rant and rave about RINOs, true conservatives, sell-outs, etc., etc., etc., yada, yada, yada. Instead, let me ask and answer some basic questions.

1) Do John Boehner or Mitch McConnell effectively get the Republicans’ message out? No.

2) Do both of them have such a well earned reputation for giving in to the Democrats that the Left assumes they will win EVERY fight with the GOP? Yes.

3) Have either Boehner or McConnell shown the ability to keep their caucuses in line the way Reid and Pelosi do? No.

4) Have either of them shown the capacity to do anything other than to passively and reluctantly react to what the Democrats are doing? No.

Boehner and to a lesser extent, McConnell, probably mean well. I’m also sure they’re both probably really nice guys. In fact, my assumption is that’s why they have their jobs. They probably remember everyone’s : birthday, give out little pieces of candy, and tell the other members what a great job they’re doing on a regular basis. But, is that all Republicans should be asking for out of a leader? Don’t we need leaders who can talk? Don’t we need leaders whose reputations haven’t been so beaten down by years of failure that everyone on both sides presumes they’re going to fail because THAT’S JUST WHAT THEY DO?

Perhaps more importantly, what signal does accepting men like this as “leaders” send about the Republican Party?

If the Republican Party was a corporation and it decided to hang on to a man like Boehner or McConnell as CEO, would you invest in them? Would you think that company cared more about taking care of its shareholders or not rocking the boat? Would you think that was a company on the comeback trail or a company in decline? The questions answer themselves.

The first sign that the Republican Party is getting serious about moving the ball forward for conservatism for the first time since the Gingrich era instead of playing patty cake with the Democrats until the country goes bankrupt will be that McConnell and Boehner both lose their jobs. If Republicans aren’t even willing to go that far, they should stop even pretending they’re serious about getting the country back on the right track.