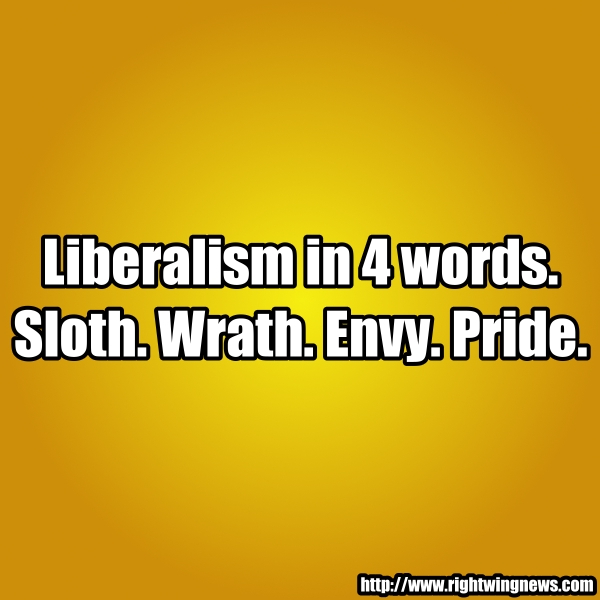 he biggest reason young Americans tend to lean to the left is that they grow up immersed in liberalism. Their entertainment, music, teachers and college professors lean to the left. Meanwhile, since few young Americans follow politics avidly or are out in the real world enough to feel the sting of left-wing policies, the only place they typically get to hear the conservative position is from liberals. That’s like getting the history of WWII from Hitler – or Noam Chomsky, either/or – and expecting to get an accurate picture of what the Allies believed.

That puts these kids in a position where they are predisposed to believe the worst about conservatives and it makes it more difficult for them to stumble upon the truth. After all, if someone hurls a “When did you stop beating your wife?” style accusation at a conservative, he’s unlikely to respond in a calm, rational manner and kindly explain why that person has him all wrong. Once you’ve called someone a “racist,” “sexist” or “homophobe,” you’re unlikely to have much of a dialogue with him.

So, if you’re conservative, here’s something you can share with your sons, daughters, cousins and nephews to help refute the propaganda they’re being fed on a daily basis by the Left. Conservatism works and liberalism doesn’t; so if kids aren’t dying to get on the dole or brainwashed to hate us, most of them are going to choose conservatism if they’re allowed to make an informed choice.

1) Conservatives hate black Americans: Like Clarence Thomas, Herman Cain, Ben Carson, Tim Scott, Thomas Sowell, Walter Williams and Mia Love? That’s funny because all of those black Americans seem to be extremely popular with conservatives. To liberals, “You’re a racist” has become little more than a way of saying, “I don’t like you or agree with what you just said.” However, anyone who pays the least bit of attention will notice that conservatives tend to like and agree with black conservatives just like liberals tend to like and agree with black liberals. At the end of the day, conservatives believe that people are people, no matter what their race, color or religion happens to be. It would be a better country if everyone felt the same way.

2) Conservatives don’t believe in science because they don’t buy into global warming: To the contrary, most conservatives don’t buy into global warming BECAUSE of science. Here’s one scientific fact that should be the first thing brought up any time someone mentions the subject: temperatures have been flat since 1998. Before we go out of our minds over global warming, shouldn’t the globe actually be warming? What’s scientific about ignoring that basic fact or for that matter, offering up incredibly expensive, unworkable plans to fight it based on climate models that have been proven wrong over and over again? What is unscientific about wanting further research on the issue to find out the degree of the threat, if there even is a threat, before spending trillions of dollars and potentially decimating our economy to fight against something so iffy that many intelligent people don’t believe it exists? Screaming “scientific consensus” while you hold up a “The End Is Coming” sign and telling sad stories about polar bears aren’t what science is supposed to be like. If and when the scientific evidence to back global warming is really there, nobody will have any trouble convincing conservatives to take it seriously.

3) Conservatives hate Hispanics: Does that really gibe with the fact that quite possibly the most popular politician in America with conservatives is Ted Cruz? Liberals try to paint conservatives as racist because many illegal aliens are Hispanic and we oppose illegal immigration. However, to conservatives, the key fact about illegal immigrants isn’t that many of them are Hispanic; it’s that they’re law-breaking foreigners whom we owe nothing. They’re breaking the law to be here, soaking up far more tax dollars than any meager amount a few of them pay into the system and they take jobs away from poor and middle class Americans. Our loyalty is to Americans — black, white, Hispanic, Jews, Asian – you name it – and illegal aliens aren’t Americans and don’t deserve to be. We already have a way for foreigners to “get right with the law” and become Americans. It’s called immigrating here legally.

4) Conservatives hate gay Americans: Despite the fact that I have gay friends, was the first sponsor of GOProud’s Homocon[2], and organized a conservative effort to get Alec Baldwin fired from Capital One[3] for his homophobic comments, I don’t support gay marriage. That’s because I’m a Christian and that means that while I can support people as human beings, I can’t support things that they do that I believe go against my religion. Even if I wasn’t a Christian, I’d still oppose gay marriage because I believe marriage is the bedrock of our society and we need to strengthen it, not weaken it by further diluting its significance and meaning. That’s obviously not an expression of hatred towards gay Americans; it’s a disagreement about something that isn’t even up for debate in most of the world and wasn’t even seriously discussed here two decades ago.

5) Conservatives hate the poor: Since there are many conservatives who are poor or who’ve been poor (myself included[4]), that would require hating ourselves. The truth is that there’s a big difference in how liberals and conservatives approach the poor. Liberals know that poor Americans tend to vote Democrat; so they like the idea of poor Americans staying poor and dependent on the government. On the other hand, conservatives believe the best thing we can do for poor Americans is to make it as easy as possible for them to pull themselves up by their own bootstraps. That means keeping taxes low, the economy strong and growing, giving parents’ choices in education and keeping crime under control. It’s not compassion to “help” someone by keeping him on public assistance for years; it’s a tragedy. It’s much more compassionate to create an environment that allows that same person to get a job, take care of his family and pull himself out of poverty.

6) Conservatives are in the pocket of the rich: This has always been a weird smear given the cozy relationship liberals like Obama have with Wall Street and billionaires like Warren Buffet and George Soros. Additionally, conservatives oppose corporate welfare, are infuriated by businesses using their government connections to squash competition and have no sympathy for corporate crooks. However, we’re also not envious of people who have a lot of money, we support capitalism, and we believe in the free market. To paraphrase Ronald Reagan, “We still want an America where people can get rich.”

7) Conservatives are waging a war on women: So, which women are we waging a war on? Governor Jan Brewer? Governor Nikki Haley? Former Vice-Presidential nominee, Sarah Palin? Oh, but conservatives don’t respect strong women? You mean like Ann Coulter, Michelle Malkin or Dana Loesch? Conservatives just want women to stay in the kitchen and be quiet? You mean like Congresswomen Mia Love, Marsha Blackburn and Cathy McMorris Rodgers?How dumb would you have to be to think that those women, along with Megyn Kelly, Michele Bachmann, Laura Ingraham, S.E. Cupp, Condi Rice and tens of millions of others would go along with policies that they believe are going to hurt women?