My latest Townhall column is called, Show This Column to Anyone Who Claims Bush Lied about WMDs in Iraq[1]. Here’s an excerpt from the column. 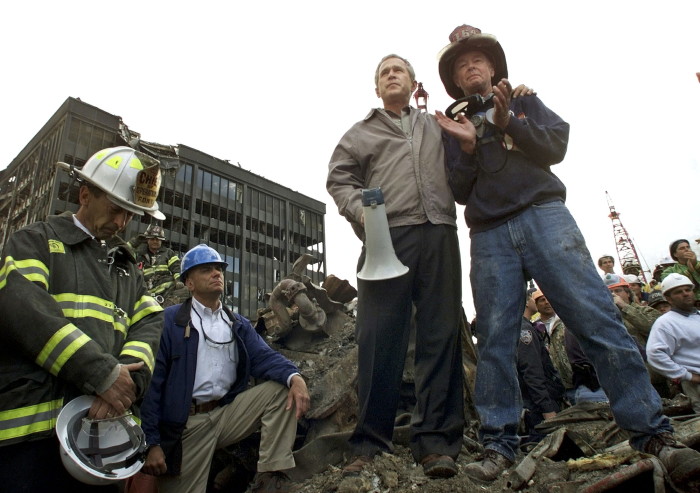 Here’s an excerpt from the column.

Throughout the Bush years, liberals repeated “Bush lied, people died” like a mantra. That slander wasn’t true then and it’s not anymore true now that it has resurfaced. There are many legitimate criticisms of the way the Bush Administration conducted the war in Iraq and even more of the way Obama threw away all the blood and treasure we spent there for the sake of politics, but you have to be malicious or just an imbecile at this point to accuse Bush of lying about WMDs.

To begin with, numerous foreign intelligence agencies also believed that Saddam Hussein had an active WMD program. The “intelligence agencies of Germany, Israel, Russia, Britain, China and France[3]“ all believed Saddam had WMDs. CIA Director George Tenet also rather famously said that it was a “slam dunk[4]” that there were weapons of mass destruction in Iraq.

“Incidentally, it’s hard to fault the CIA for their conclusions when even, “In private conversations that were intercepted by U.S. intelligence, Iraqi officials spoke as if Saddam continued to possess WMD. Even Iraqi generals believed he did. In the fall of 2002, the Iraqi military conducted exercises in chemical protective gear – but not because they thought the U.S.-led coalition was going to use chemical weapons.”

Additionally, many prominent Democrats who had access to the same intelligence that George Bush did came to the same conclusion and said so publicly. If George W. Bush lied, then by default you have to also believe that Bill Clinton, Hillary Clinton, Al Gore, John Kerry, John Edwards, Robert Byrd, Tom Daschle, Nancy Pelosi[5] and Bernie Sanders also lied. Some of them, like Hillary Clinton, even alleged that Saddam was working on nuclear weapons.

“In the four years since the inspectors left, intelligence reports show that Saddam Hussein has worked to rebuild his chemical and biological weapons stock, his missile delivery capability, and his nuclear program. He has also given aid, comfort, and sanctuary to terrorists, including Al Qaeda members, though there is apparently no evidence of his involvement in the terrible events of September 11, 2001. It is clear, however, that if left unchecked, Saddam Hussein will continue to increase his capacity to wage biological and chemical warfare, and will keep trying to develop nuclear weapons. Should he succeed in that endeavor, he could alter the political and security landscape of the Middle East, which as we know all too well affects American security.” — Hillary Clinton, October 10, 2002

Even Bernie Sanders, who opposed the war from the beginning, publicly said he believed that Iraq had weapons of mass destruction[6].

Mr. Speaker, the front page of The Washington Post today reported that all relevant U.S. intelligence agencies now say, despite what we have heard from the White House, that “Saddam Hussein is unlikely to initiate a chemical or biological attack against the United States.” Even more importantly, our intelligence agencies say that should Saddam conclude that a U.S.-led attack could no longer be deterred, he might at that point launch a chemical or biological counterattack. In other words, there is more danger of an attack on the United States if we launch a precipitous invasion.

You can’t blame Bernie and Hillary too much for thinking Iraq had WMDs because privately, even former weapons UN inspectors were saying the same thing[7].

Additional confirmation of this latter point comes from Kenneth Pollack, who served in the National Security Council under Clinton. “In the late spring of 2002,” Pollack has written,

I participated in a Washington meeting about Iraqi WMD. Those present included nearly twenty former inspectors from the United Nations Special Commission (UNSCOM), the force established in 1991 to oversee the elimination of WMD in Iraq. One of the senior people put a question to the group: did anyone in the room doubt that Iraq was currently operating a secret centrifuge plant? No one did.

Furthermore, as even the New York Times has been forced to admit, large numbers of pre-Gulf War WMDs have actually been found in Iraq[8].

From 2004 to 2011, American and American-trained Iraqi troops repeatedly encountered, and on at least six occasions were wounded by, chemical weapons remaining from years earlier in Saddam Hussein’s rule.

In all, American troops secretly reported finding roughly 5,000 chemical warheads, shells or aviation bombs, according to interviews with dozens of participants, Iraqi and American officials, and heavily redacted intelligence documents obtained under the Freedom of Information Act.

One of the reasons Saddam Hussein went to such great lengths to hide what he was doing was because he did have thousands of old WMDS stockpiled.  However, that wasn’t all there was to it. Even though the ultimate conclusion of the Iraqi Survey Group was that Saddam didn’t have an active WMD program, his hands were far from clean on the WMD front.

…When Saddam had asked a senior military official in either 2001 or 2002 how long it would take to produce new chemical agent and weapons, he told ISG that after he consulted with CW experts in OMI he responded it would take six months for mustard.

Another senior Iraqi chemical weapons expert in responding to a request in mid-2002 from Uday Husayn for CW for the Fedayeen Saddam estimated that it would take two months to produce mustard and two years for Sarin.”

— “…(O)ne scientist confirmed that the production line…..could be switched to produce anthrax in one week if the seed stock were available.”

…With regard to Iraq’s nuclear program, the testimony we have obtained from Iraqi scientists and senior government officials should clear up any doubts about whether Saddam still wanted to obtain nuclear weapons.

They have told ISG that Saddam… remained firmly committed to acquiring nuclear weapons. These officials assert that Saddam would have resumed nuclear weapons development at some future point. Some indicated a resumption after Iraq was free of sanctions.”

“1. Saddam, at least as judged by those scientists and other insiders who worked in his military-industrial programs, had not given up his aspirations and intentions to continue to acquire weapons of mass destruction. Even those senior officials we have interviewed who claim no direct knowledge of any on-going prohibited activities readily acknowledge that Saddam intended to resume these programs whenever the external restrictions were removed. Several of these officials acknowledge receiving inquiries since 2000 from Saddam or his sons about how long it would take to either restart CW production or make available chemical weapons.”

The Duelfer report[10] also noted that Saddam had every intention of making more WMDs.

In other words, it is true that no stockpiles of new WMDS were found and the people in the best position to know didn’t conclude the weapons were moved to Syria. However, had Saddam Hussein not been taken out, he would have still had stockpiles of old WMDs available and he had every intention of making more.

Given all of that, it’s no surprise that everyone from the head of the CIA to Bernie Sanders to the British thought that Saddam had WMDs; yet George W. Bush is the one who is accused of deliberately sending American soldiers to their deaths over a lie.

No honest person can read all of this and STILL repeat the disgusting smear that George W. Bush lied about WMDs to get us into war in Iraq.