10) Occupy Atlanta, after doing a lot of creepy chanting and weird hand signs, refuses to let John Lewis speak at its protest[1].

8) This kooky list of demands[3] on the Occupy Wall street forum was picked up everywhere as their list of demands. It includes items like, raising “the minimum wage to twenty dollars an hour,” “Open borders migration. anyone can travel anywhere to work and live,” and “immediate across the board debt forgiveness” for everyone “on the entire planet.” Because this sounds all too plausible given the gang of braindead rabble attending the Occupy protests across the country, people bought it. But actually, the Occupy Wall Street people want you to know, “There is NO official list of demands.” In other words, they have no idea why they’re camping in the park like hobos. No idea at all.

7) Roseanne Barr[4], who’s worth 80 million dollars, spoke at the Occupy Wall Street rally where she said, “that if corporations were people (as decided by the Citizens United Supreme Court ruling), then Goldman Sachs should be executed for financial crimes against the American people.” When asked about her comments, she added:

‘I first would allow the guilty bankers to pay… back anything over 100 million in personal wealth because I believe in a maximum wage of 100 million dollars and if they’re unable to live on that amount then they should go to the reeducation camps, and if that doesn’t help, then be beheaded.’

If bankers are only allowed to have 100 million, how about we set the guillotine limit for less productive people, like actresses, at say 5 million? Roseanne? Roseannne?

6) Brookfield properties, which owns the park the protesters are squatting in, asked the police to clear it for cleaning. In their letter, they “told police that it had received “hundreds of phone calls and emails” from locals complaining about “lewdness, groping, drinking and drug use, the lack of safe access to and usage of the Park, ongoing noise at all hours, unsanitary conditions and offensive odors.[6]”

5) In their greatest blow yet against Wall Street…or something, protesters managed to shut down the National Air and Space Museum[7] when they “stormed the building.”

4) The crowd at Occupy Wall Street[8] seems to love animals — and I mean, they REALLY LOVE ANIMALS.

Everything seems to be possible. [Crowd Parrot Chant] You can travel to the moon. [CPC] You can become immortal [CPC] by biogenetics. You can have sex with animals, or whatever. [CPC]

3) 700 Occupy Wall Street protestors are arrested as they block the Brooklyn Bridge at rush hour[9].

2) A speaker at Occupy LA notes that they’ll need violence to achieve their goals[10].

One of the speakers said the solution is nonviolent movement. No, my friend. I’ll give you two examples: French Revolution, and Indian so-called Revolution.

Gandhi, Gandhi today is, with respect to all of you, Gandhi today is a tumor that the ruling class is using constantly to mislead us. French Revolution made fundamental transformation. But it was bloody.

India, the result of Gandhi, is 600 million people living in maximum poverty.

So, ultimately, the bourgeoisie won’t go without violent means. Revolution! Yes, revolution that is led by the working class.

1) An Occupy Wall Street protester defecates on a cop car[11]. 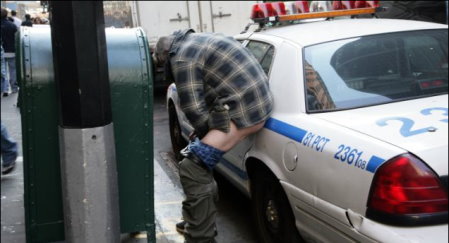