The 25 Best Quotes From American Soldiers

25) “Don’t fire until you see the whites of their eyes!” — William Prescott at the Battle Of Bunker Hill

24) “To be prepared for war is one of the most effective means of preserving peace.” — George Washington 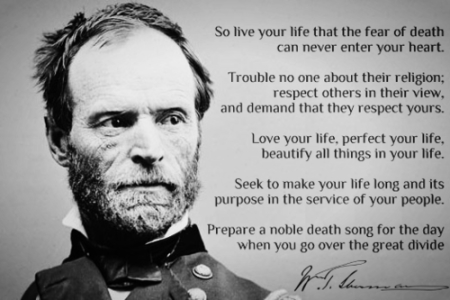 23) “When this war is over, the Japanese language will be spoken only in hell!” — Admiral Bill Halsey on December 7, 1941

22) “Nuts.” — The response of General Anthony MacAuliffe, when asked to surrender during the Battle of the Bulge, 1944

21) “I tremble for my country when I hear of confidence expressed in me. I know too well my weakness, that our only hope is in God.” — Robert E. Lee

20) “War is cruelty. There is no use trying to reform it. The crueler it is, the sooner it will be over.” — Gen William T. Sherman

19) “Of the Marines on Iwo Jima, uncommon valor was a common virtue.” — Chester W. Nimitz

18) “They’ve got us surrounded again, the poor [email protected]” — Creighton W. Abrams, Battle of the Bulge

16) “We have gone forth from our shores repeatedly over the last hundred years and we’ve done this as recently as the last year in Afghanistan and put wonderful young men and women at risk, many of whom have lost their lives, and we have asked for nothing except enough ground to bury them in, and otherwise we have returned home to seek our own lives in peace.” — Colin Powell

15) “We have met the enemy and they are ours!” — Oliver Hazard Perry

13) “I wish to have no connection with any ship that does not sail fast; for I intend to go in harm’s way.” — John Paul Jones

11) “I have only two men out of my company and 20 out of some other company. We need support, but it is almost suicide to try to get it here as we are swept by machine gun fire and a constant barrage is on us. I have no one on my left and only a few on my right. I will hold.” — Clifton B. Cates, Belleau Wood, July 1918

10) “Yonder are the Hessians. They were bought for seven pounds and tenpence a man. Are you worth more? Prove it. Tonight the American flag floats from yonder hill or Molly Stark sleeps a widow!” — John Stark at the Battle of Bennington in 1777

9) “[email protected] it, you’ll never get the Purple Heart hiding in a foxhole! Follow me!” — Henry P. Crowe

8) “Victory was never in doubt. Its cost was…What was in doubt, in all our minds, was whether there would be any of us left to dedicate our cemetery at the end, or whether the last Marine would die knocking out the last Japanese gun and gunner.” — Major General Graves B. Erskin in reference to the Battle Of Iwo Jima

6) “Don’t you forget that you’re First Marines! Not all the communists in Hell can overrun you!” — Lieutenant General Lewis “Chesty” Puller when surrounded by eight enemy divisions

5) “Get there first with the most.” — Nathan Bedford Forrest

4) “It is fatal to enter a war without the will to win it.” — Douglas MacArthur

3) “I am besieged by a thousand or more of the Mexicans under Santa Anna. I have sustained a continued bombardment for twenty-four hours and have not lost a man. The enemy have demanded a surrender… otherwise the garrison is to be put to the sword if the place is taken. I have answered the summons with a cannon shot, and our flag still waves proudly from the walls. I shall never surrender or retreat.” — William B. Travis, Alamo

2) “If you kill enough of them, they stop fighting.” — Curtis LeMay