The 25 Worst Quotes from Donald Trump

My latest Townhall column is called, The 25 Worst Quotes from Donald Trump[1]. Here’s an excerpt from the column. 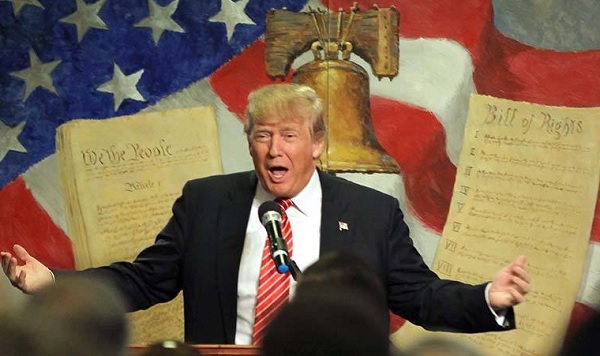 I’ve already written the 25 Best Donald Trump Quotes[3] and it seems like the right time to do the 25 worst quotes as well so primary voters can read both lists before they choose a candidate.

2) “I get called by a guy that can’t buy a pair of pants[5], I get called names?” – Trump’s comment about paralyzed commentator Charles Krauthammer

3) “How stupid are the people of Iowa?[6]” after talking about a poll showing Ben Carson was beating him in Iowa

4) “I’m not sure I have ever asked God’s forgiveness[7]. I don’t bring God into that picture….When I go to church and when I drink my little wine and have my little cracker, I guess that is a form of forgiveness. I do that as often as I can because I feel cleansed.”

6) “(Obama) doesn’t have a birth certificate. He may have one, but there’s something on that, maybe religion, maybe it says he is a Muslim[9]. I don’t know. Maybe he doesn’t want that.”

7) “An ‘extremely credible source’ has called my office and told me that @BarackObama’s birth certificate is a fraud[10].”

8) “I am embracing the issue, and I’m proud of the issue. I think somebody has to embrace it because, frankly, the people that are – and I don’t like the name ‘birther[11],’ because I think it’s very unfair and I think it’s very derogatory to a lot of very good people that happen to think that there’s a possibility that this man was not born in this country, and by the way, if that were true, you know it’s very interesting, if that were true, it’d be the greatest scam in the history of this country.”

10) “Look at that face! Would anyone vote for that?[13] Can you imagine that, the face of our next president?! I mean, (Carly Fiorina’s) a woman, and I’m not supposed to say bad things, but really, folks, come on. Are we serious?”

11) “You know, it really doesn’t matter what they write as long as you’ve got a young and beautiful piece of ass.[14]”

13) “Beautiful, famous, successful, married – I’ve had them all, secretly, the world’s biggest names, but unlike Geraldo I don’t talk about it.” – From Trump’s “Think Big and Kick Ass”

14) “I don’t think Ivanka would do that [pose for Playboy], although she does have a very nice figure. I’ve said if Ivanka weren’t my daughter, perhaps I’d be dating her[16].”

16) “We’re losing a lot of people because of the Internet. We have to see Bill Gates and a lot of different people who really understand what’s happening and maybe, in some ways, closing that Internet up in some ways.[18]”

17) “The Canadian plan also helps Canadians live longer and healthier than America. … We need, as a nation, to reexamine the single-payer plan[19], as many individual states are doing.” (2000)

18) “There’s many different ways (to fix health care), by the way. Everybody’s got to be covered. This is an un-Republican thing for me to say because a lot of times they say, ‘No, no, the lower 25 percent that can’t afford private.’ But…I am going to take care of everybody. I don’t care if it costs me votes or not. Everybody’s going to be taken care of much better than they’re taken care of now….the government’s gonna pay for it.[20]” – Trump still supporting single payer, government-run healthcare in 2015

21) “Bush was a disaster for the country as well as for the Republican Party. Then he asked me about Barack Obama. I told him that Barack will need to be a great president because we’re in serious trouble as a country. It hasn’t been this way since 1929. So he doesn’t have much choice—he will simply have to be great, which he has a very good chance of being. What he has done is amazing. The fact that he accomplished what he has—in one year and against great odds—is truly phenomenal.” (2009)