The Conservative Case Against Marco Rubio

My latest Townhall column is called, The Conservative Case Against Marco Rubio[1]. Here’s an excerpt from the column. 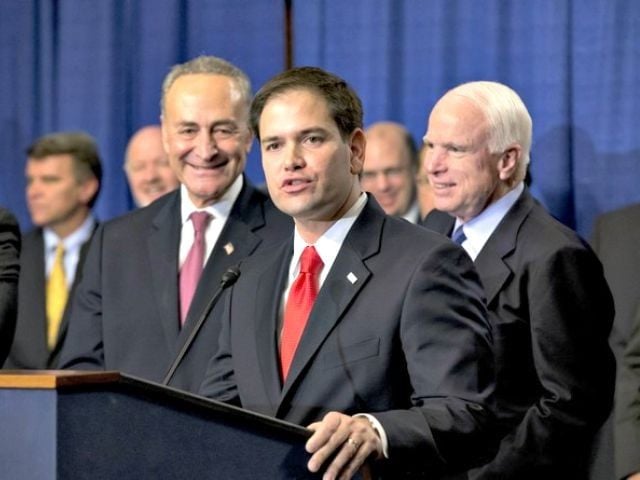 Marco Rubio may not be a squish on most issues, but it doesn’t change the fact that his Gang-of-8 Amnesty Bill is unforgivable. Nobody would be campaigning harder against Marco Rubio today than Marco Rubio back in 2010 when he desperately needed to convince Tea Partiers he was tough on immigration to get elected. You could write a whole article on how bad Rubio’s bill was (In fact, I did[3]), but let me cut to the chase for you.

B) The Gang-of-8 Bill was little more than a Democrat wish list with a couple of bells and whistles slapped on to give cover for squishy Republicans to support it as well. The bill legalized illegals before adding in any kind of security and despite Rubio’s dishonest hype, it would have done little to secure the border. Between giving citizenship to illegal aliens and massive increases in legal immigration, Rubio’s bill would have demographically marginalized conservatism in America.

If Rubio becomes President and implements something like his Gang-of-8 Bill, then liberals will be destined to win in the future on every issue that matters. I’m not someone who believes you win in politics by losing, but it’s entirely possible that 4-8 years of Hillary Clinton decimating the country and stacking the Supreme Court would do far less damage to the country than the immigration plan Marco Rubio would likely implement if he becomes President.

C) Rubio’s excuses for his betrayal are ridiculous. Oh, we have ISIS now; so we have to secure the border. Well, we had Al-Qaeda then. Stopping that terrorist organization from getting across the border wasn’t important? Rubio also claims that he gave the Democrats almost everything they wanted in hopes that the House would improve the bill. In other words, Rubio was willing to turn the Senate bill into little more than Barack Obama’s wish list in hopes that John Boehner of all people would negotiate a tough conservative plan? You’d have to be dumber than Meghan McCain to believe that the same guy who caved every time he went up against Obama was going to come up with a great bill after Rubio made him negotiate from a position of weakness. In actuality, Rubio was hoping the pro-amnesty leadership of the House would ignore the Hastert rule and would push an immigration bill through with a few moderate Republicans and all the Democrats helping out. When a guy shoves a knife in your back that deeply and won’t even come clean about it, how do you trust him?

D) Even today, Rubio fully admits that he wants to give citizenship to illegal aliens – and that’s during a Presidential race. You really think that sounds like someone who is going to get tough on illegal immigration or build a wall if he gets elected? Keep in mind that if Rubio becomes President and is perfect in every other way, but is lying on illegal immigration again, it means the end of the conservative movement in America. Choosing him as our nominee would be like playing Russian Roulette with 5 bullets in the chamber.

Of course, the Republicans in the establishment are happy to play that game and have decided that “Lil Jeb” is their chosen candidate. In large part, that’s because they expect him to betray conservatives on amnesty again, but it’s also because they don’t believe Rubio will shake things up too much. They don’t think he’ll roll back Obamacare, they don’t think he’ll kick any connected consultants off the gravy train, they don’t believe he’ll listen to those “wackobirds” that John McCain hates so much. After the most radical President in American history has stomped all over the Constitution for 8 years to drag the country to the Left, is it worth risking the country on someone backed by the establishment Republicans because they believe he’s a go-along-to-get-along status quo candidate?

Oh, but the establishment Republicans say Rubio is the most electable candidate. Of course, that’s what they always say about whoever their golden boy happens to be. It’s what they said about Dole, McCain and Romney. They were wrong about them and they’re wrong about Rubio, too.

Don’t get the wrong idea. Rubio could certainly win, but he probably wouldn’t be as electable as Cruz or God help us all, even Kasich despite his solid head-to-head numbers against Hillary.

Keep in mind that Rubio can’t win a general election unless he gets the support of the 30-35% of GOP voters that currently support Donald Trump. Do you really think that after supporting Trump for months, those voters are going to fall in line behind an establishment candidate who is best known for betraying the people who supported him to push amnesty and open borders? Moreover, consider the fact that 60% of GOP voters have consistently been going for the outsider candidates (Trump, Cruz and Carson). Do you really think all those people are going to shrug off this entire crazy primary season and eat the same old crap sandwich from the establishment again?

Beyond that, although Rubio is generally a solid debater, he turned in one of the worst debate performances anyone has seen with his “Robot Rubio” performance. What if it happens again in a general election debate? He’s also generally very scripted, inauthentic and his pathetic non-response to every genuine attack on his record is , “That’s a lie.” Furthermore, maybe we should consider the fact that a candidate who wants the NSA to snoop on our phone records, showed terrible judgment in supporting the overthrow of Libya and who comes off like he can’t wait to get in another ground war in the Middle East isn’t going to be wildly popular with the American electorate in 2016.

It has been an unpredictable election season and we still don’t know who the GOP nominee will be. However, if it turns out to be a guy who did the same thing to conservatives on immigration that Jane Fonda did to the troops during Vietnam, the Republican Party will richly deserve to lose.