It all began when Meghan McCain posted this admittedly hot photo of herself on Twitter: 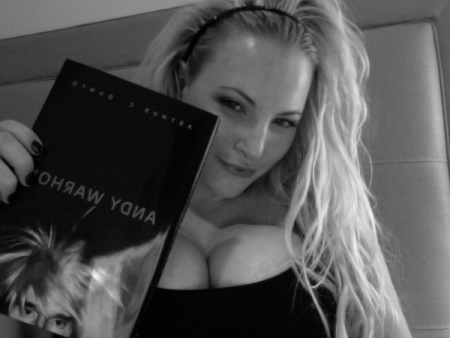 Then apparently, in a shocking breach of internet decency, someone, somewhere must have called Meghan McCain a slut. That prompted this flood of pathos from Meggie Mac[1]:

so I took a fun picture not thinking anything about what I was wearing but apparently anything other than a pantsuit I am a slut, this is

when I am alone in my apartment, I wear tank tops and sweat pants, I had no idea this makes me a “slut”, I can’t even tell you how hurt I am

ok I am getting the f*ck off twitter, promise not to delete my account until I sleep on it, thank you for the nice words supporters

I do want to apologize to anyone that was offended by my twitpic, I have clearly made a huge mistake and am sorry 2 those that are offended.

After this, poor little Meghan McCain got a predictable surge of fanboy support, even from ABC’s Jake Tapper[2].

Poor Meghan McCain! Don’t listen to the haters, Meghan! Oh, how cruel the world is that anyone could say anything bad to poor little Meghan McCain!

Now normally, I try to be chivalrous about this sort of thing, even with liberals — but, I’m sick and tired of the weird self-esteem issues of the McCain family being thrust into the national spotlight.

I believe Meghan McCain’s father spent much of the last few years attacking other Republicans and even introducing damaging legislation, in large part, because he wanted to punish the GOP for rejecting him in favor of George W. Bush in 2000. For all of his courage in Vietnam and his skill at politics, John McCain is a small, vindictive, petty little man who’s personally unworthy of even being a senator — and the apple didn’t fall far from the tree.

Meghan McCain is an airhead with severe self-esteem issues who joined the Republican Party late last year just so she could get more attention for criticizing it — and she ruthlessly exploited her family name to get attention.

“Oh, look at John McCain’s daughter! She’s a liberal Republican who hates everything about Republicans! Wow, put her on the View! Let’s give her a column at the Daily Beast even though she’s a mediocre writer! Awesome!”

Meghan McCain is a trite, no-nothing, silver spoon mediocrity who’s willing to be a dancing monkey for the Left to get her 15 minutes of fame. It’s pathetic really, but so be it.

Yet and still, even though Meghan McCain has been handed everything in her life on a silver platter because her last name happens to be McCain, somebody calls her a “slut” and she has a public meltdown. In all seriousness, people like Michelle Malkin[3], Ann Coulter[4], and Laura Ingraham[5] probably see more truly vicious comments in any given week than Meghan McCain has seen in a lifetime. Yet, you don’t see them having little public snit-fits about it. Maybe that’s because they earned their success and don’t have the fragile self-image that comes from knowing that they’re just pretenders trading on their daddy’s name.

PS: If this seems mean, there’s a reason for it. I think sell-out publicity whores like Meghan McCain are particularly despicable in politics. I talk to people every day of the week who are struggling on in politics to make a positive difference for their country. They go out and bust their behinds, often toiling in obscurity, because of a sense of patriotism or because they want their children to grow up in a better country than the one they grew up in.

Then, a female version of Spalding Smails who thinks she knows everything comes along, makes fun of the things they hold dear just to try to get her name in lights, and then breaks down when she gets back 1/10 of what she dishes out. It’s contemptible. It’s perfectly ridiculous. And it’s about time someone said so.

Update #1: For all of you waiting with bated breath to see if the Republican Paris Hilton (Sorry, Paris! You don’t really deserve that) would delete her Twitter account, it appears that she has decided against it:

I would like to thank my family and friends for their support. This has been an embarrassing experience but also a learning one. I will not

be deleting my twitter account but I will be more careful in the future about my use with the medium.

So, this was a “thank my family and friends for their support” moment for the little pampered princess? Seriously? And there are people who think she’s mature enough to intelligently comment on political issues?