If Republicans don’t find better ways to pitch conservatism to black, Hispanic, and Jewish Americans, the GOP will have no choice other than to move to the Left in coming years in order to appeal to these voters. That’s why the single most important thing that Republicans can do over the next few decades is minority outreach. 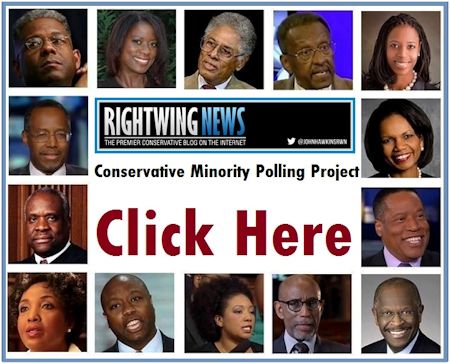 With that in mind, Right Wing News is creating the Conservative Minority Polling Project[1].

How does that help?

Well, Right Wing News is already well known for polling conservative bloggers on different issues. We look forward to polling black, Hispanic and Jewish[3] voters as well. Not only do we want to compare these groups to other conservatives, we want to get their advice on how to do outreach. After all, who would know better how to reach out to black Americans than black conservatives? What advice would Hispanic conservatives have about reaching Hispanic Americans? Do Jewish conservatives have any special insight into how to better reach Jewish Americans?