Tuesday night[1], Kellyanne Conway was on Anderson Cooper’s show on CNN. I’ve always liked Anderson Cooper, so this incident shocked me. He had been going through clips of President Trump on the campaign trail talking about FBI Director James Comey. Conway was on there to discuss him being fired by Trump. After Cooper played a clip from Michigan, she snarkily thanked him for a trip down memory lane. And then he rolled his eyes at her… BIG TIME. That’s extremely unprofessional and I’m stunned that Cooper would stoop so low as to show his personal bias here. Not cool.

Of course[2], it went viral immediately with the left celebrating it and making endless gifs to pass around. Trolls. Conway insinuated it was media bias and sexism. I can go for the media bias, but I don’t think this was sexism. It shows a distaste for anyone connected to President Trump. Although, I could be wrong, but I doubt it. Cooper is gay and I’ve never seen him do this before, so who knows. 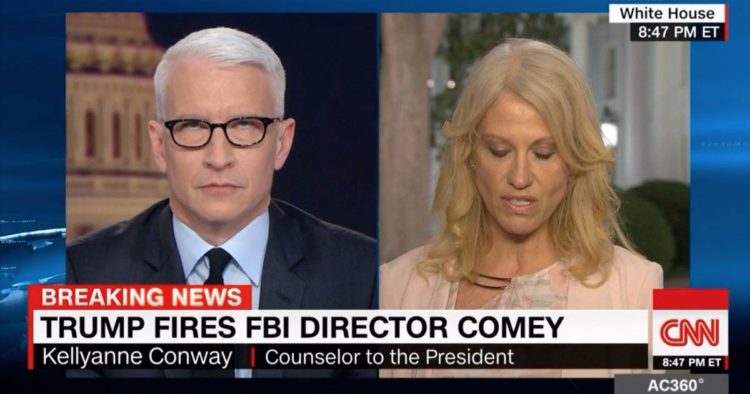 White House counselor Kellyanne Conway suggested[4] Thursday that Anderson Cooper’s viral eyeroll[5] at her was an example of sexism that she faces constantly from the media.

Upon hearing Conway make a quick boast about Trump’s surprising win in Michigan last November, the CNN host ostentatiously rolled his eyes. The moment blew up[6] across the Internet, with anti-Trump sites cheering Cooper for his display.

“Let me tell you something,” she said when asked for her reaction on “Fox & Friends.” “Hillary Clinton is in search of sexism as a lame excuse for why her disastrous candidacy and campaign lost. I face sexism a lot of times when I show up for interviews like that.”

“Could you imagine rolling your eyes, having a male anchor on the network roll eyes at Hillary Clinton, at somebody, a female representative spokeswoman for President Obama or President Bill Clinton? I think not,” she added.

Frankly, we don’t need more mud being thrown around like this. Conway should not be going on CNN. They are a hostile network and going there is just asking for it. Conway responded, “You are conflating two things that don’t belong together. Thanks for the trip down memory lane. I was on your show often last fall, saying we were going to win Michigan and how we were going to do it,” prompting Cooper’s eye-roll. Conway suggested it only happened because she is a woman[7] who works for a Republican.

Again, I think that is a real stretch and was calculated. Not to besmirch Conway… but I don’t think it had anything to do with her gender. Liberals sure cheered it as sexism though. And Anderson Cooper should be ashamed of his behavior and he should apologize to Conway. Sexism is a thing and all women face it. I’m sure Conway gets more than her share. But let’s nail these guys for their media bias and their lies and leave the gender stuff to the depraved leftists.