Kellyanne: Half of Twitter would EXPLODE if “I were Shot and Killed” [VIDEO]

Things are spiraling out of control[1] out there and fast. Kellyanne Conway was on “Fox & Friends” and pointed out the toxic levels of hatred out there against the right. Everyone is on edge after a Bernie Sanders supporter went to a Virginia baseball practice and shot Congressman Scalise in the hip, his aide, a lobbyist and two police officers. It the police had not been there, it would have been a bloodbath. We could have lost 25 or 30 members of the Republican leadership. Thankfully they shot the guy… he later died at an area hospital.

Conway pointed out that if she were assassinated, half of Twitter would explode in applause and excitement. That is true. But it would also result in what could potentially be a civil war. We are teetering on that right now. The gunman is responsible for what he did, but the left and the media have created a nurturing environment for radical killers out there and this blood is on their hands as well. 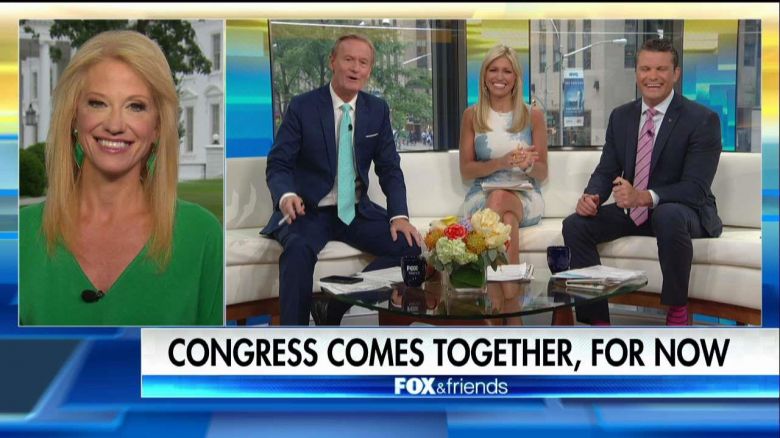 White House counselor Kellyanne Conway said on “Fox & Friends” that political rhetoric must be tamped down following the attack on Republican members of Congress.

She called for “introspection” in light of recent mock-assassinations of the president, including by comedian Kathy Griffin[3] and rapper Snoop Dogg[4] and at a New York City production[5] of “Julius Caesar.”

[email protected][6]: We will disagree on policy, but people need to think about their hateful rhetoric. pic.twitter.com/8xKE3yAfUN[7]

Conway said only the shooter is to blame for the attack that left House Majority Whip (R-LA) Steve Scalise critically wounded, but called out the “toxic stew” of hateful rhetoric against the president and his supporters.

“If I were shot and killed tomorrow, half of Twitter would explode in applause and excitement. This is the world we live in now. It’s terrible. Again, it’s one thing to say I disagree with you on health care repeal or taxes or national security, but you can’t attack people personally and think tragedies won’t happen,” she said.

Right after the shooting, Nancy Pelosi made cooing sounds about uniting. That didn’t last long. Yesterday, she was back at blaming the right… blaming the victims for being shot. It was disgusting. Conway also noted threats to other members of Congress, including Claudia Tenney and Martha McSally.

Rep. Claudia Tenney, R-New York, received an email with the subject line: “One down, 216 to go…,” according to a screenshot of the email provided by Tenney’s office. McSally said she has received threats for her support of President Trump, including a Tucson man who called her office and said he couldn’t wait to pull the trigger. And then there’s the issue of FBI agents and local police who are investigating threats and a suspicious white powder found in packages mailed to a Georgia Congressional candidate, Karen Handel, her neighbors and two Atlanta broadcast stations. If this keeps up, somebody is going to get killed.