After Susan Rice Tells Trump to ‘Be Quiet,’ Kellyanne Conway Teaches Her a Lesson [VIDEO]

With Trump declaring his full support of protesters, former National Security Adviser Susan Rice thinks Trump should keep his opinions to himself. 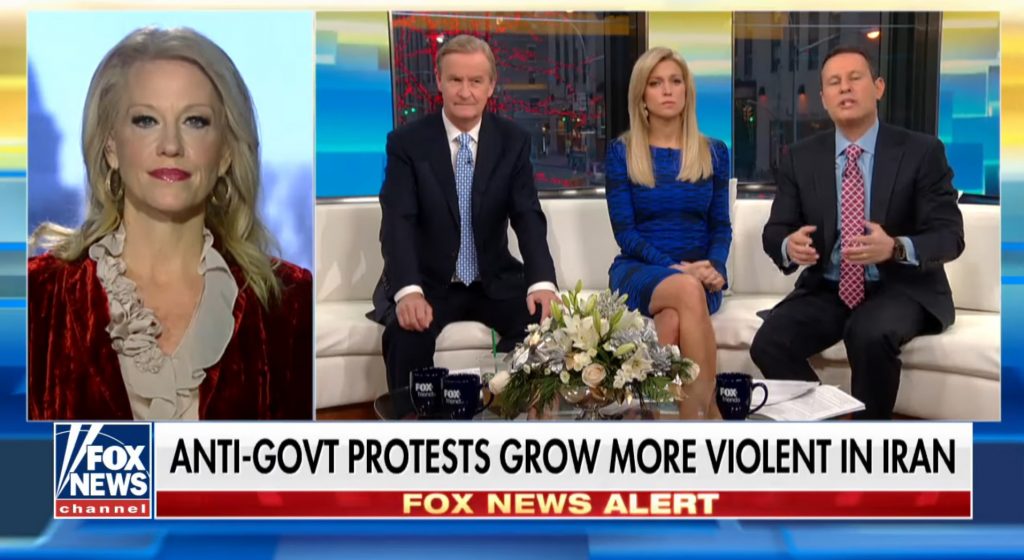 Susan Rice hasn’t had much to do since she lost her job when Donald Trump took office last year and if it wasn’t for social media there’d be no reason to hear from her.

When Kellyanne Conway appeared on Fox and Friends this morning, the clip below shows her discussing the protests in Iran. Trump has been supporting the anti-government civilian protests with nearly daily tweets over the last week applauding the people despite the fact that the Iranian government is throttling Internet access to citizens.

Big protests in Iran. The people are finally getting wise as to how their money and wealth is being stolen and squandered on terrorism. Looks like they will not take it any longer. The USA is watching very closely for human rights violations!

Iran, the Number One State of Sponsored Terror with numerous violations of Human Rights occurring on an hourly basis, has now closed down the Internet so that peaceful demonstrators cannot communicate. Not good!

Iran is failing at every level despite the terrible deal made with them by the Obama Administration. The great Iranian people have been repressed for many years. They are hungry for food & for freedom. Along with human rights, the wealth of Iran is being looted. TIME FOR CHANGE!

The people of Iran are finally acting against the brutal and corrupt Iranian regime. All of the money that President Obama so foolishly gave them went into terrorism and into their “pockets.” The people have little food, big inflation and no human rights. The U.S. is watching!

Such respect for the people of Iran as they try to take back their corrupt government. You will see great support from the United States at the appropriate time!

People are still accessing social media and the images of women taking off their hijabs which have been imposed since 1979 in public will be iconic if the protests are successful.

So yes, Trump supports the people who want to throw off the oppressive regime whose Islamic Republic pushes a dress code that’s only been “traditional” for all women since the time of bell bottoms.

But Susan Rice, whose administration had funded the regime for years, says that Trump should butt out.

How Can Trump Help Iran’s Protesters? Be Quiet. https://t.co/w0MNlWMkxG[9]

When a co-host on Fox and Friends asked Conway for her opinion on Rice’s tweet, Conway replied:

“I wish [Rice[ had been quiet when she lied about what happened in Benghazi when she blamed a tape and we know that’s not what happened,” saying that she lied to Americans on five different Sunday shows about the incident that left several people including Ambassador Chris Stevens dead.

Conway said that you “don’t be quiet when people are losing their lives because they are standing up for basic essential needs and freedom.”

Oddly, while big-name lefties are pushing back against Trump’s support, the Jeff Bezos-owned Washington Post is siding with Trump and the protesters, because they think it’s a good way to get Trump to keep up Obama’s disastrous Iran Deal[11] which sent hundreds of millions of dollars to the country in exchange for a pinky-swear that they wouldn’t start collecting nukes.

Conway, 50, was the first woman in American history to run a successful presidential campaign and along with Hope Hicks and Press Secretary Sanders, she is one of the chief communicators for the Trump administration.

Rice, 53, was born to an economics professor at Cornell, who was once a governor of the Federal Reserve System and an education policy scholar who helped to develop the Pell Grant post secondary subsidy funded by the Department of Education. Rice holds degrees from Stanford and Oxford University and was introduced to the Clintons through Madeleine Albright, a family friend.