Kellyanne Conway[1] royally spanked commie Chris Cuomo during a contentious CNN interview and it was epic. Credibility certainly isn’t CNN’s long suit. Cuomo kept hitting on Donald Trump Jr. meeting with a Russian attorney during the election. First off, I think it was a bad move by Donald Trump Jr. Second, it wasn’t illegal or unethical and basically, nothing came of the meeting. But that doesn’t stop the likes of Cuomo and CNN from trying to make it into a Russian scandal. I guess they figured they finally, at long last, had something on Trump. Not so much. Meh.

It was smart of Kellyanne Conway to make him put out the actual statement, because it cut his smearing and lies right off at the knees. That was a very savvy political move and Cuomo never saw it coming. Why? Because he’s a moron. She took the air right out of his tires with that one. The gist was that a so-called Russian-connected attorney requested a meeting with Donald Trump Jr., claiming she had evidence connecting Clinton and the DNC to funding in Russia. When she got there, she instead went on about Russian adoptions. That’s what I hear happened. It was a waste of time and this is pretty much a non-story. The optics are bad and it was an unwise PR move, but other than that, it was a non-event. 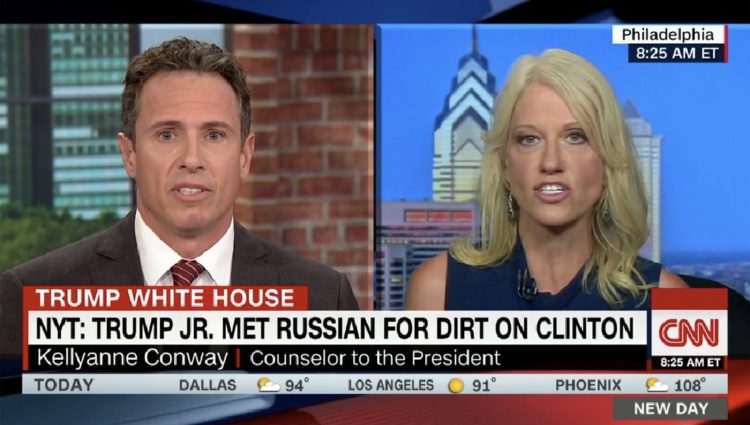 Kellyanne: You’ve got to give the whole statement to be fair to him and to be fair to your viewers. Let’s stop chopping it up and trying to go viral with this nonsense.

Chris: Put the statement up! You’re the one whose parsing, not me.

Statement: ‘After pleasantries were exchanged the woman stated that she had information that individuals connected to Russia were funding the Democratic National Committee and supporting Ms. Clinton. Her statement was vague, ambiguous and made no sense. No details or supporting information was provided or even offered. It quickly became clear that she had no meaningful information.’

Kellyann: There you go!

Chris: Even if you accept everything he said as true, there’s a credibility issue because he changed his story twice… whether or not it was good information, Kellyanne, doesn’t mean it was a good move to take a meeting with a Russian connected person who is going to give you negative information about your opponent.

Kellyanne: I admire your moxie sitting there with the CNN emblem right near you talking about credibility issues with the couple of weeks you guys have had. You want [this meeting to have] produced something because you’re invested in months now as a network – in something that simply doesn’t exist.

The debate was heated, that’s because Cuomo thinks if he keeps hammering home that the Trump clan is guilty of collusion with the Russians, it will somehow stick. It won’t and Kellyanne Conway wasn’t going to just let him lie unhindered. These idiots are so obsessed with Trump and Russia, they have quit reporting any meaningful news at all. They need an intervention.

Cuomo, who is the son of former New York Gov. Mario Cuomo, said members of the Trump campaign taking a meeting with a Russian lawyer because he expected negative information on Hillary Clinton put the campaign in a bad legal place. No… it didn’t. Show me where that was illegal. You can’t because it wasn’t. And unless you have a magic recording of what was actually said in that room, I suggest Cuomo shut his yap over it. Otherwise, that is slander. For almost a year now, we’ve gone round and round on Trump and Russia and there is still no solid proof. Try reporting real news for a change and give it a rest already.