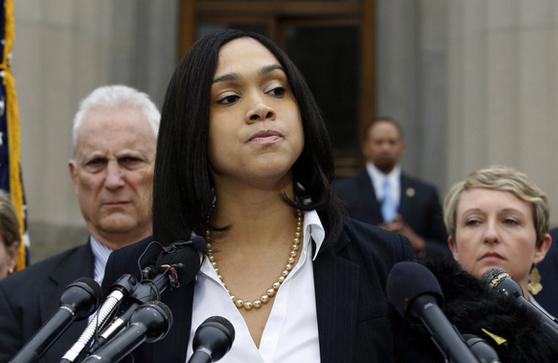 [1]On May 1, Baltimore prosecutor Marilyn Mosby charged six police officers, including two black male officers and one female black officer, with 28 various charges, including murder and manslaughter over the death of Freddie Gray. Officer Caesar Goodsoon, the black driver of the van Gray rode in, was charged by the 35-year-old state’s attorney for Baltimore City with the most serious offense, “second-degree depraved heart murder,” which means indifference to human life. Baltimore is 64 percent black, and almost half of the Baltimore Police department is black.

The officers are accused of arresting and roughing up Gray, who is black, for no good reason, then neglecting his request for medical care as they took him to the police station. The officers arrested him because they believed he had a switchblade, which is illegal under Maryland law. Mosby declared that he did not have a switchblade, claiming there was no probable cause to arrest him. Mosby said while he was being transported in the back of the police van without a seatbelt on, he suffered a neck and back injury. He died a week later of the injuries. One of the officers charged, Garrett Miller, has said that Gray was arrested “without force or incident.”

Mosby announced the charges a mere 12 days after Gray’s death, only one day after receiving the results of the police internal investigation and almost immediately after receiving the medical examiner’s report. In contrast, a grand jury returned a decision of no indictment against Officer Darren Wilson more than three months later after his death.

Mosby didn’t bother presenting the evidence to a grand jury to get an indictment, which would have given the charges more credibility. Although her husband is a Baltimore City Councilman, presenting a likely ethical conflict, she refused to step aside to let a special prosecutor handle the case. Instead, she handled the case herself, declaring she had found probable cause against all six officers.

Renowned left-wing attorney Alan Dershowitz denounced the charges as “outrageous and irresponsible.” He told[2] Newsmax TV, “They are presumed innocent, they need due process of law, and the mayor and the state attorney have made it virtually impossible for these defendants to get a fair trial. They have been presumed guilty.” Former prosecutor Jonathan Keiler, writing for The American Thinker, said[3] “her actions are not only unethical, but border on professional malpractice.” Even the left-leaning editorial board of The Chicago Tribuneexpressed its skepticism of the charges, in an article entitled A Prosecutor’s Rush to Judgment in Baltimore[4].

Jazz Shaw observed[5] at Hot Air, “tagging Caesar R. Goodson, Jr., with second degree depraved heart murder will be a serious stretch, considering the need to prove intent (on top of everything else) against someone who was walled off in the driver compartment of the vehicle and unable to reach – or for the most part even see – Freddie Gray.”

The Baltimore chapter of the Fraternal Order of Police has condemned the charges. The union’s attorney, Michael E. Davey, said, “The actions taken today by the state’s attorney are an egregious rush to judgment. We believe that these officers will be vindicated, as they have done nothing wrong.” The FOP is asking Mosby to recuse herself due to her husband’s position as a city councilman as well as her personal connection to the Gray family’s attorney, William H. “Billy” Murphy Jr. Murphy contributed $5,000 to Mosby’s campaign last year and served on her transition committee. She also is personally acquainted with some of the journalists covering the case, who would likely testify at trial.

Lawyers for the accused police officers filed a motion Friday calling for the case to be thrown out and that Mosby remove herself or be dismissed off the case. They assert that Mosby and her husband stand to benefit financially and professionally from the prosecution.

Dershowitz predicts the case will be thrown out for lack of evidence, and all Mosby is doing is postponing the riots until that happens. When police officers are charged with crimes for fatally shooting suspects, they are only convicted[6] about one third of the time.

Mosby may have violated ethics rules by not recusing herself and for speaking publicly about the case, prejudicing the outcome. <href=”#rule_3.8″>Rule 3.8(e) of the Maryland Lawyer’s Rules of Professional Conduct, which applies to prosecutors, states that “except for statements that are necessary to inform the public of the nature and extent of the prosecutor’s action and that serve a legitimate law enforcement purpose, [a prosecutor shall] refrain from making extrajudicial comments that have a substantial likelihood of heightening public condemnation of the accused…”

Mosby has already declared that there was no probable cause, since Gray was not carrying a switchblade as the police thought. The problem with this is she has already determined guilt, dismissing the possibility that the officers could have justifiably believed the folding knife was a switchblade.

She may have also violated <href=”#rule_1.7″>Rule 1.7, the conflict of interest rule. It basically says that a lawyer shall not represent a client – which could include the government – “if there is a significant risk that the representation of one or more clients will be materially limited by … a personal interest of the lawyer.”

Here, Mosby and her husband choose to gain political points by looking like they are cracking down on racism in the police department. Mosby ran for office on a platform of promising to hold police accountable.

Dershowitz believes Mosby and Baltimore Mayor Stephanie Rawlings-Black, who also made public statements in response to the rioting, were motivated by “a threat of riots and a desire to prevent riots.” Riots broke out shortly after Gray’s death, with protesters chanting, “Make them pay for Freddie Gray!” Millions of dollars in damage was done through the looting and burning of local businesses; 15 police officers were injured and 34 arrested. Mosby declared during her announcement of the charges, “To the people of Baltimore and demonstrators across America, I heard your call for ‘No Justice, No peace.’ Your peace is sincerely needed as I work to deliver justice on behalf of this young man.”

I’m a little more cynical than Dershowitz, and believe Mosby was intending to score political points with blacks and race bait in order to keep blacks voting for Democrats like herself. As a former prosecutor myself, I find it mind boggling that Mosby did not instantly recuse herself from the case; the ethical conflicts are so blatant a first year law student could spot them. Pitting blacks against blacks is despicable, and shows how low we’ve become as a country. I believe that Mosby is counting on this prosecution to last long enough to motivate blacks to go to the polls next year. Some, like Morgan Brittany, the former Hollywood actress turned political analyst, believe the radical left is deliberately inciting[7] massive unrest and rioting nationwide.

It is not clear how Mosby is going to assert this was a crime of racism considering half of the officers are black. Is this how far the radical left will go to stir up accusations of racism, target and prosecute those it claims to protect?

It boils down to this: The way to stop the rioting is to stop fomenting racism. This tragic incident was handled completely wrong, obviously in order to achieve a certain outcome. Mosby should have recused herself from the case immediately and appointed a special prosecutor, and the case should have gone to a grand jury to decide whether or not to indict the officers. Mosby and Rawlings-Black – perhaps along with Mosby’s husband – should have issued a joint statement stating, “While racism sometimes occurs in society, this incident was not a result of it. Half of the six police officers involved in this incident are black. It would be unjust to label this as racism and ruin more black lives than the one that has already been lost.”

Until this approach changes, the race baiters are playing with fire – literally.