It’s that other way of making money[1]. Obviously, the Hildebeast was in bed with the Mullahs of Iran. Wonder how much they paid her? And then she was running the racketeering scheme of selling access to White House officials for donations (kickbacks) to her foundation. Bad Hillary, bad… Good for Larry Klayman and Freedom Watch. In a just world, this would nail the old Marxist’s hide to a wall. In today’s climate, it won’t do anything. Hopefully, down the road, when these enemies from within are ousted, Hillary Clinton will be brought to task and retire to a nice, cozy little cell permanently. 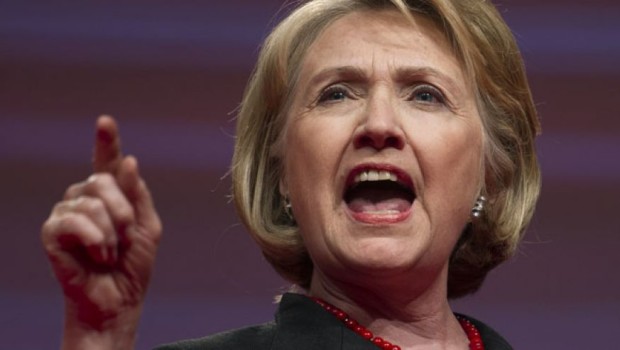 The conservative group Freedom Watch has filed a racketeering lawsuit against former Secretary of State Hillary Clinton that accuses her of failing to produce documents under the Freedom of Information Act (FOIA).

The civil suit, filed Wednesday in the U.S. District Court for the Southern District of Florida, argues that Clinton used her private emails to sell access to other officials in return for donations to the Clinton Foundation.

It alleges that, during her tenure, Clinton withheld documents requested under FOIA regarding State Department waivers given to businesses or individuals doing business with Iran, possibly undermining U.S.-imposed sanctions.

The complaint[3], which lists Bill and Hillary Clinton and the Clinton Foundation as defendants, alleges the Clintons sold access to other U.S. government officials in return for donations to their organization, which they concealed, allegedly, by using a private computer server for her emails operated from their home in Chappaqua, New York.

“Public reports about plans to counter Iran’s nuclear weapons development programs undermined the effectiveness of those plans by revealing them to Iran and other terrorist organizations and states,” the complaint states.

The civil suit alleges the Clintons “systematically and continuously … conducted a corrupt enterprise” over more than 10 years, allegedly in violation of the Racketeer Influenced and Corrupt Organization (RICO) Act, which deals with abuse and misuse of organizations or businesses.

In a statement, Klayman cast his lawsuit as “the first and only hard-hitting case to address the growing email scandal.”

“What Hillary Clinton, her husband, and their foundation have done is nothing new. It is simply part of a criminal enterprise which dates back at least 10 years, all designed to enrich themselves personally at the expense of the American people and our nation. It’s time, however, that they finally be held legally accountable,” Klayman said.

Clinton acknowledged the private server earlier this month, explaining that she deleted more than 30,000 emails her aides deemed personal, and turned over the rest to the State Department for archiving.

The House select committee investigating the deadly 2012 attack in Benghazi, Libya, has asked Clinton to turn over her server to an independent arbiter. Speaker John Boehner (R-Ohio) has also demanded Clinton turn over the server but has so far not directed House Republicans to subpoena her records.

On the Iran issue, not only did this undermine sanctions, I would contend it is an act of treason. As far as RICO statutes are concerned, there is no doubt in my mind the Clintons were doing this. No wonder they are trying to hide their emails. We may never know the full extent of Hillary’s treachery, but perhaps we can keep this monster out of the White House. She literally sold her allegiance to every enemy the US has and then squeezed money out of anyone and everyone she could to enrich herself personally. She’s a very big part of the most corrupt presidency in American history.