Two Iraqi-born men were arrested Thursday[1] in Houston and Sacramento in an ongoing terrorism investigation, according to prosecutors. They are being charged with giving material support to ISIS. The kicker here is that when one of the refugees filed for US citizenship, they just took him at his word when he said he had no terrorist ties and no weapons training. Both were of course lies. How is asking these refugees questions like this considered actual vetting? It’s not. It’s ridiculous. To gain entry, our enemies will naturally lie like this and our government knows it. What’s even worse is at least one of them became radicalized here in the US. 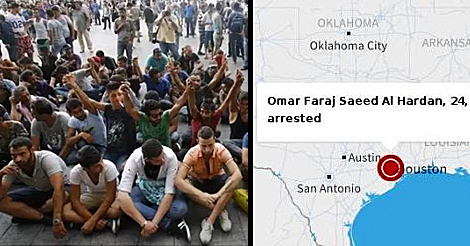 Two Muslim men were arrested Thursday in Houston and Sacramento in an ongoing terrorism investigation, according to prosecutors.

In a statement late Thursday, the U.S. Attorney’s office in Sacramento identified the suspect there as Aws Mohammed Younis Al-Jayab, 23, who faces a federal charge of making a false statement involving international terrorism.

“According to the complaint, Al-Jayab is a Palestinian born in Iraq, who came to the United States as an Iraqi refugee in October 2012,” the statement said.

“Between November 2013 and January 2014, Al-Jayab allegedly reported on social media that he was in Syria fighting with various terrorist organizations, including Ansar al-Islam, a designated foreign terrorist organization since 2004,” authorities said. “He returned to the United States on Jan. 23, 2014, and settled in Sacramento.”

When he was interviewed by U.S. citizenship officials, Al-Jayab lied about his travel, claiming he went to Turkey to visit his grandmother, the criminal complaint said.

A Department of Justice statement said Omar Faraj Saeed Al Hardan, 24, also a Palestinian born in Iraq, was arrested in Houston. Al Harden, who has lived in the U.S. since 2009, is charged with one count each of attempting to provide material support to ISIS, procurement of citizenship or naturalization unlawfully and making false statements.

An third arrest Thursday in Milwaukee was not related to terrorism, the DOJ told CBS News’ Paula Reid.

Texas Governor Abbott tied it to the Syrian refugee controversy:

“I applaud the FBI for today’s arrest of this dangerous subject,” Abbott said. “However, this is precisely why I called for a halt to refugees entering the U.S. from countries substantially controlled by terrorists. I once again urge the President to halt the resettlement of these refugees in the United States until there is an effective vetting process that will ensure refugees do not compromise the safety of Americans and Texans.”

That’s exactly right. It’s why Donald Trump and Ted Cruz are also calling for the same thing. There is no way to vet these people. There is no paper trail and we don’t know who they are or what they believe. There are surely terrorists in their midst and we are bringing them in by the thousands. Until we have a way to find out who these people really are and what they are doing, we should not allow them inside our borders. Unless of course Obama wants a monstrous terrorist attack on American soil and I’m not so sure that isn’t the case.