Obama is doubling and tripling down[1] on regulations that will oppress Americans even more. And guess what? He did it just before Thanksgiving. He always does this just before a holiday, so people will be too busy to notice until it’s too late. This set of regulations breaks records and the bank at the same time. Over 2,000 new regulations alone are in this batch. 144 are deemed ‘significant’ as they will each cost $100 million and up. Obama had 136 of these ‘significant’ regulations last spring. He’s spending as fast as he can to drive us off the fiscal cliff and into the abyss before he leaves. They will massively raise the price on a whole slew of items that we use. Just when Americans can afford it least thanks to the prolonged economic depression that never was according to Obama. 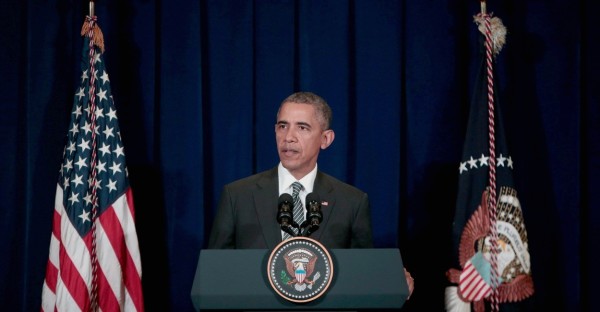 President Obama is nothing if not predictable. Required by law to release plans for new regulations twice a year, the administration has consistently done so just before major holidays, when few are paying attention.

Thus, it was no surprise to see his fall 2015 regulatory agenda[3] released last Friday, as many Americans focused on Thanksgiving week with family and friends.

A look at the agenda shows why the White House didn’t want it publicized. Over 2,000 regulations are now being written. Of these, 144 are deemed “economically significant”—that is, expected to cost Americans $100 million or more each.

This is a new record, beating the previous high of 136 set by President Obama this spring. The regulations span the full scope of American life, ranging from labeling requirements for pet food, new test procedures for battery chargers, mandated paid sick leave for contractors, and automatic speed limiters for trucks to a dozen new rules limiting energy use (and increasing the price) of everything from furnaces and dishwashers to dehumidifiers.

One of these new rules may be of special interest to Americans sitting down to their Thanksgiving dinner: mandated labeling of serving sizes for food that “can reasonably be consumed at one eating occasion.”

Although none of the rules have been adopted yet, the intent is clear. The agenda is a list of what’s on the drawing board, and with barely a year left in office, the Obama administration is planning to add even more to the already unprecedented burdens[4] it has placed on the America’s economy and society.

Americans—and the Congress they elect—should put a stop to it.

One of these nifty new fascist regulations limits the size of a meal each of us can eat at one sitting. I kid you not. We have to stop and reverse this insanity. The Founders intended that the Constitution should limit the size and control of federal government. They intended the lion’s share of power to be endowed with the states and this is why. Obama has unconstitutionally usurped power and control at every turn. He uses regulation as a weapon of war against his own people. A nation cannot long subsist when strangled by thousands and thousands of regulations like this and Obama knows it. He will add as much as he can before he leaves. We have to elect a conservative such as Ted Cruz, who knows the Constitution inside and out, to start undoing the damage that Obama has wrought. Our Republic’s existence depends on it.