A Federal Court in Denver: has ruled in a 3-0 decision that: it is acceptable for a police chief to order a: Christian police officer: to attend religious services in an Islamic mosque, even if doing so violates his or her: religious convictions.: 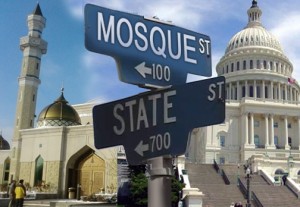 The ruling came on Thursday from the 10th U.S. Circuit Court of Appeals in a case brought by Capt. Paul Fields, who had been ordered by Tulsa police officials to either go to a special event at the local mosque himself, or order others to do that.

Fields refused based on religious freedom objections and was punished for that.

The judges on the 10th Circuit panel said that was perfectly appropriate.

Capt. Paul Fields first filed suit against the police: department, the chief of police: and deputy chief after he was suspended for 10 days from the force following an internal investigation.Capt. Fields’ claimed that his: punishment for not attending violated his religious rights, but the court disagreed[2].:

The court ruling lists these reasons for ruling against Fields’ appeal:

This case has been closely watched by Robert Muise of the American Freedom Law Center. Muise told WND: [3]that this: ruling is: “troubling on so many levels.” He went on to say that “[AFLC]: intend(s) to seek full court review of this patently erroneous decision.”

One can only wonder if the outcome of this ruling: would have been the same if: Capt. Fields were a Muslim ordered to attend an event at a Christian church.