Father to marry adoptive son, with the court’s blessing!

Well, at first I thought this was a whole new level of debauchery[1], but not so much. 20 years ago, it was common for gay couples to use adoption as a ruse for estate planning and insurance. These two men in Pennsylvania, took advantage of this sanctioned loophole. Now that gay marriage is legal in that state, they had to get a court to annul their adoptive proceedings so they were no longer seen as father and son in the eyes of the state, but just as two men who wanted to get married. That’s exactly what happened and now that the once helpful maneuver has been done away with, they will tie the knot this summer. 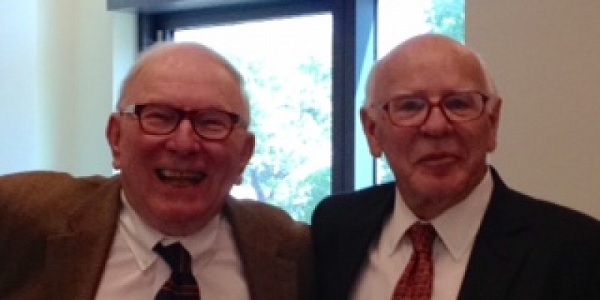 The Pandora’s box of same-sex marriage has just released a new pairing unimaginable a few short years ago.

Norman MacArthur and Bill Novak, father and son, though not biologically, will soon be husband and … whatever, reports the Patch of Bucks County, Pennsylvania.

The pair, both in their 70s, have been together for 50 years and registered in New York City as domestic partners in 1994. But when they moved to Pennsylvania, they discovered their domestic partnership wasn’t recognized, and legalized same-sex marriage was nowhere on the horizon.

Needing to take care of estate-planning issues, the pair pursued a novel legal approach. Novak adopted MacArthur in 2000. The fact their parents were deceased removed any legal objection.

“It was the only legal method we could use in Pennsylvania to give underpinning to our relationship,” MacArthur said.

So, a week ago, the father and son’s Petition to Vacate Adoption Decree was approved, and the pair simply became two single men now allowed to marry.

“We are ecstatic beyond belief,” MacArthur said. “I feel an enormous sense of not only relief but freedom that we can finally do something in Pennsylvania that I’ve been dreaming of for years.”

According to their lawyer, Terry Clemons, the adoption strategy was commonly used 15 to 20 years ago to facilitate estate planning and access to medical care.

The pair has been given a marriage license and is planning a summer wedding.

They are in their 70s now and time is getting short I guess. They are doing what they have dreamed of for years. They have been together for 50 years… that’s a long time. I still believe marriage should be between a man and a woman, but they are evidently life partners. Still, these types of scenarios were never dreamed of even a few short years ago. America is morphing into a place most of us don’t recognize and it is getting stranger by the day.