Once again, Ted Cruz gets it right…[1] this is liberal fascism in all its hideous glory. I’ve met many Mennonites and they are as a whole the most gentle and kindest people you will ever come across. But they are devout Christians and no government will succeed in forcing them to do what they consider immoral and that which goes directly against their religious beliefs. Because this Iowa couple would not hold a gay wedding three years ago, they have finally been forced to close their doors. Not just to weddings, but for good. A wonderful business started with the purchase of a 77 year-old stone church, with an idyllic setting for weddings. But because they would not cater to a gay couple that could have gone to another wedding spot, they have been destroyed. The couple was not content with just finding another vendor, they vindictively went out of their way to crush a Christian business that would not violate strongly held Christian doctrine. 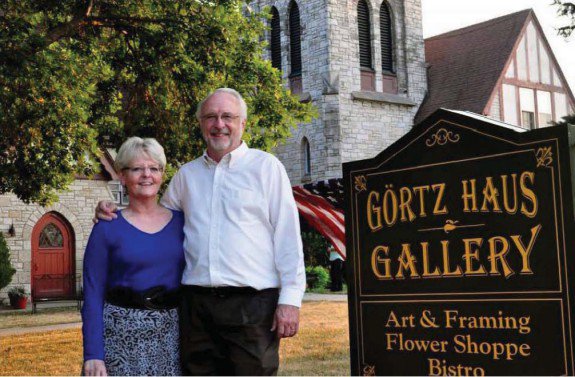 An Iowa Mennonite couple was fined and forced out of business after refusing to host a gay wedding at their gallery and flower shop.

The Christian couple opened their business in 2012.

The Christian owners of a gift shop and bistro in Iowa, who were earlier charged with discrimination and had to pay for a settlement after refusing to hold a same-sex wedding at the venue, say they are now having to close down their business completely.

Richard Odgaard and his wife, Betty, the owners of Görtz Haus Gallery in Grimes, Iowa, say they will close their business completely by the end of August, about two years after they told a gay couple from Des Moines their facility cannot be rented for the wedding.

The gay couple promptly filed a discrimination complaint through the Iowa Civil Rights Commission. Although the Odgaards refused to admit they discriminated against the same-sex couple, they agreed for a $5,000 settlement.

“Our faith hasn’t changed,” Betty earlier said after the settlement. “Of course, it’s kind of a crushing blow because that’s a major part of our business and weddings are so absolutely gorgeous in that place.”

The settlement couldn’t deal with the aftermath.

“We can’t pretend it’s going to get better. There wasn’t enough business,” The Daily Signal quoted Betty, 63, as saying on Friday.

The Mennonite couple started their bistro, flower shop, art gallery and wedding venue after buying a 77-year-old stone church in 2012.

The gay rights movement has turned aggressively fascist and they have the government and courts behind them. In the name of sexual rights, which are not provided for in the Constitution, they are destroying our religious freedoms which ARE in the Constitution. How is this being allowed when it is so blatantly un-American? Because the Progressive/Marxist leaders we have let take charge of our country are anti-Christian and pro-gay. They are putting forth a communist agenda and destroying Christians while condoning immorality and this move is foundational to their agenda. If you won’t follow the government’s mandates, no matter how morally or ethically reprehensible, you will be fined out of existence and possibly put in jail. This is the persecution of mainstream America and it is meant to radically transform our government, our schools, our institutions, our history, our language and our beliefs into something that is the very antithesis of Christianity.