JUST IN: Trey Gowdy Just Did What No One Else Could – Got the CIA Director to Admit… [VIDEO]

Trey Gowdy is the man…[1] he really should be the one heading up the FBI. Yesterday, he danced with ex-CIA Chief John Brennan, grilling him on whether he had any concrete evidence that President Trump or his campaign actually colluded with the Russians. Brennan did the intel shuffle and tried to claim certain aspects were classified. Gowdy wasn’t buying it… not at all. Finally, Brennan admitted that he doesn’t know of any collusion whatsoever. Everything is based on unfounded suspicions. What a leftist hack.

It’s been a year of this bull crap and we’ve yet to see one piece of concrete evidence. It’s one huge political smear that hasn’t stuck. Gowdy has a titanium spine and he’s a legal pit bull. I’d almost pity Brennan if he wasn’t such an unmitigated scumbag. Gowdy was hugely skeptical of Brennan’s beliefs on the whole matter. What does this mean? Brennan hates Trump and distrusts him. He badly wants to nail him so he can be removed, but he doesn’t have squat and it’s killing him. Good. 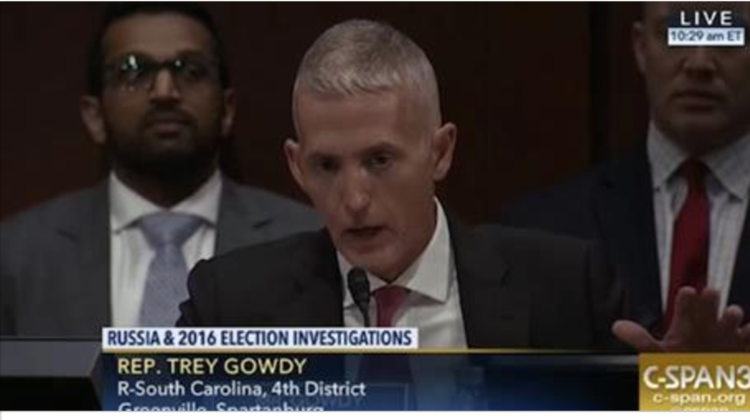 Brennan was testifying in front of the House Intelligence Committee Tuesday about connections between the U.S. and Russia.

Gowdy asked Brennan if he had seen any evidence of collusion, coordination or conspiracy between Donald Trump and Russian actors.

Brennan responded that he had seen information about contacts between Russian and U.S. actors that led him to believe the matter should be investigated further by the FBI, but declined to say whether or not he saw direct links between Trump and Russia.

“That doesn’t help us a whole lot,” Gowdy snarked.

“I was aware of intelligence and information about contacts between Russian officials and U.S. persons that raised concerns in my mind about whether or not those individuals were cooperating with the Russians. … That served as the basis for the FBI investigation to determine whether such collusion, cooperation occurred,” Brennan explained.

All this smoke is nothing but a distraction from actual crimes committed on the left. Tell me why no one is looking into the Democratic aides that are now being prosecuted for being paid millions, stealing data and now supposedly holding it against the Dems? One of these guys just fled to Pakistan and they have terrorist ties. How about Hillary Clinton’s ACTUAL ties to Russia where she helped set up their Silicon Valley… Skolkovo? Her foundation got millions and she set the Russians up with the tools to go to cyberwar with us. But no, chase phantom Trump charges.

Brennan came off as a total political hack in his testimony and Gowdy didn’t give him an inch. He has a thing for words beginning in ‘C’. “I asked you about collusion, coordination and conspiracy, and you used the word ‘contact,’” Gowdy said. “Contact could be benign or not benign. So was it contact you saw…what was the nature of what you saw?” Brennan said he saw ‘interaction’. Whatever the hell that means. This whole thing is a farce to keep President Trump from enacting his agenda. I say end it… no evidence, no crime and a big fat waste of time.

Fact: We have a serious problem with intel getting leaked and being politicized. The problem grew under John Brennan's tenure.

His twitter feed reads like a Democrat activist. Scary that this guy was Deputy Chief of Staff at CIA. No wonder we have political leaks. https://t.co/iC6kqRDSn8[6]