Since investigating multiple “fake” scandals like the White House Benghazi cover-up and IRS targeting of conservatives seem so petty, Holder’s crew have been itching for something worthy to investigate. 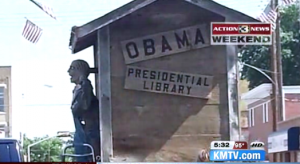 A controversial float in the Norfolk Independence Day parade is just the ground-breaking case they were hoping for.

“One of the floats included a zombie-like mannequin standing near an outhouse labeled ‘Obama Presidential Library,’”: Omaha World-Herald reported.

According to the World-Herald :

The department sent a member of its Community Relations Service team, which gets involved in discrimination disputes, to a Thursday meeting about the issue. Also at the meeting were the NAACP, the Norfolk mayor and The Odd Fellows.

Dale Remmich said he created the float because he: is upset with the president’s handling of the Veterans Affairs Department, and the mannequin was meant to depict himself, not President Obama.

The Independent Order of Odd Fellows, the group that organized the annual parade, said the float was registered as political satire and was one of the most popular at this year’s event.: Remmich maintains the float was never meant to be racist, but rather an expression of free speech.

In case you missed the controversy, check out the news coverage here:: ‘Racist’ Obama parade float has tongues wagging