Whoever takes the King’s schillings[1], owes the King loyalty… More of Obama’s Chicago mafia tactics at play. If you don’t support Amnesty, then we will cut off your funding. Well, then do it. Cut off the funding – it should not be taking place any way. Cities, counties and states should be funding their own law enforcement. One thing is for sure… when it comes to the Obama Administration and DHS, play ball on illegal immigration or safety and Americans be damned. 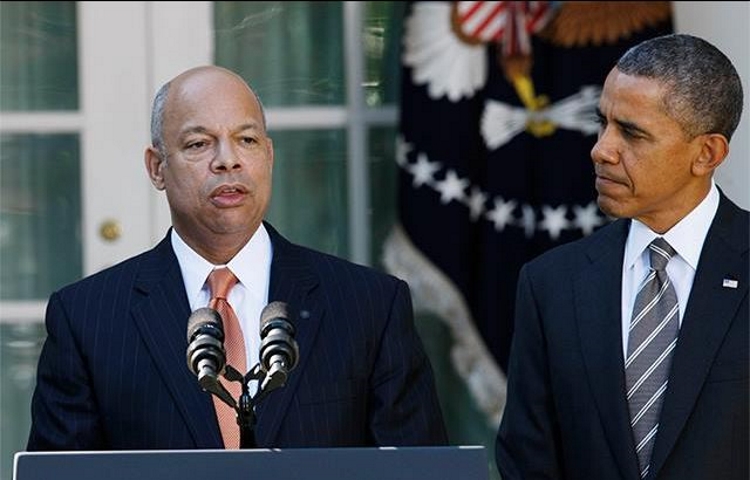 According to a Facebook post by one Colorado sheriff, Department of Homeland Security Secretary Jeh Johnson (pictured above) is taking a personal interest in making sure authorities across the nation fall in line with the Obama administration’s immigration policy. Scroll down to see the full post.

Larimer County Sheriff Justin Smith reported receiving a “very interesting veiled threat” from Johnson, which he said was addressed to “all police chiefs and sheriffs around the country.”

Within the correspondence, Smith explained, was a promise that “local and state public safety agencies would not receive federal grants they were counting on” if legislators do not endorse the DHS funding bill Obama supports.

After Obama’s executive action regarding immigration – a move that erases the threat of deportation for millions of illegals currently in the U.S. – was issued late last year, Republicans in Congress have characterized the order as a back door amnesty. Smith reports that the administration is now attempting to co-opt law enforcement agencies to plead Obama’s case before local lawmakers under threat of severe budget cuts.

He concluded with a message to Obama and Johnson, asking the former to respect the role Congress plays in the U.S. government and the latter to stop issuing threats on behalf of the administration.

“Sheriffs don’t take kindly to them,” he wrote.

Sheriffs don’t like to be threatened. Good for that Colorado sheriff. This is one of the reasons that Obama desperately wants all local and state law enforcement nationalized and brought under the purview of DHS. That way he can utterly control what they say and what they do. The Progressive mafia would go nationwide and the Constitution would become irrelevant. A true totalitarian state would ensue. If monetary extortion doesn’t do the trick, maybe massive riots and racial unrest will. Doing the Communists proud. 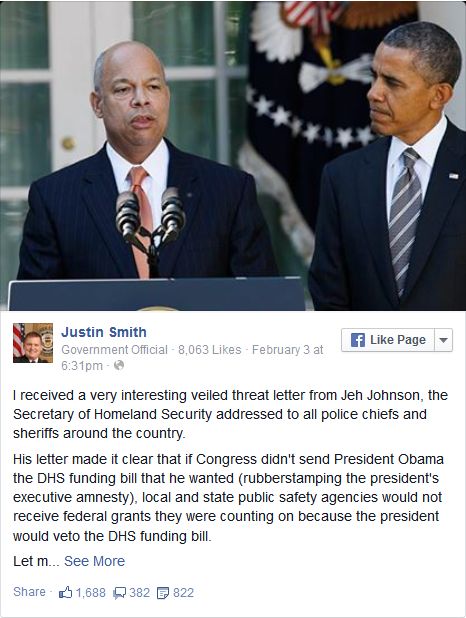 “Let me get this straight,” he wrote in the Facebook post, “—the president believes he has the authority to nullify federal laws that don’t serve his personal agenda, but if Congress dares to exercise it’s [sic] responsibility of controlling the purse strings, he will willingly hold public safety grants hostage just to get his way?”