Mark Levin: The Clintons ‘Must Be Prosecuted’ [Video]

I absolutely agree and it is way overdue[1]. Mark Levin is also right that with the confirmation of Loretta Lynch as the new Attorney General, Hillary Clinton will never be prosecuted. What Bill and Hillary Clinton did in their dealings with Russia was nothing less than treason. They sold out their country for money and power and didn’t even think twice about it. Bill Clinton sold us to the ChiComs; Hillary sold us to the Russians[2]. What you are seeing here is Hillary’s idea of a reset with millions of dollars cushioning the red button. 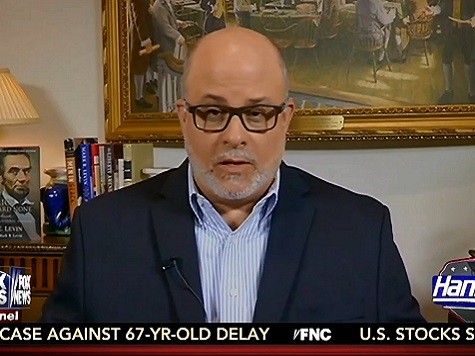 Talk radio host and author of “The Liberty Amendments[3],” Mark Levin argued the Clintons “must be prosecuted” for their dealings with the Clinton Foundation on Thursday.

Levin said, “we now know that major donors to the Clintons, their so-called library and foundation money laundering scheme, sold half of America’s uranium to Russia. Uranium, used, among other things, for nuclear weapons. 20% of all uranium deposits in the United States are now owned by the Russians. …They must be prosecuted, now these people have been treated like a king and a queen for too damn long.”

Levin added, “in the full light of day, in open debate, not in the controlled media, she will lose.” And “these people would sell anything for a buck, while they trash hardworking Americans who actually are successful without government handouts, without buying a patronage, and who knows whom, and all the rest of it. What needs to be toppled, Mrs. Clinton, is you, and your husband, and Obama.”

The Hildebeast is imploding and the Left can’t get far enough or fast enough away from her. But no one is addressing what can now be done about Russia owning 20% of the uranium that is used in our electronics, utilities and most importantly, our military applications such as nuclear weapons. They are now entrenched in Wyoming, Utah and Texas. What the Clinton’s did in making the deal with Uranium One and Russia is monstrously treasonous and was no less than a massive bribe from our enemies. I might add this is not new behavior for the Clintons… Billy Boy was schmoozing with the Chinese in the ’90s. In the infamous words of Johnny Chung, who was eventually convicted of conspiring to violate campaign finance laws along with bank fraud and other various shenanigans: ”The White House is like a subway. You have to put in coins to open the gates.” Only with the Clintons, it’s millions of dollars, not coins. They are leaving a legacy of RICO violations in their wake and a weakened and vulnerable America, ripe for her enemies to attack.