A newly inducted New York Muslim judge[1] ditched the Bible and swore in on a Quran. Welcome to America, land of the free! 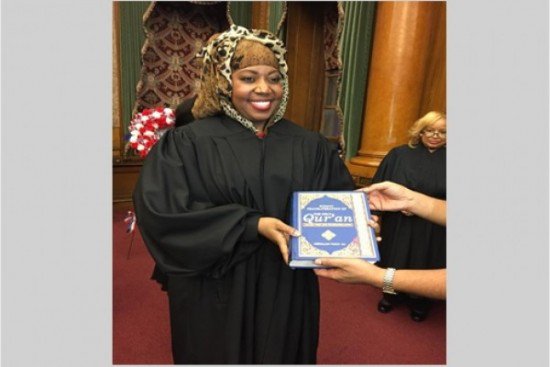 Judge Walker took her oath respecting the sacred book of her Islamic faith, the Holy Quran, while also wearing a hijab.

A video posted on Facebook shows the moment when Judge Walker was sworn in as a civil court judge of the 7th Municipal District at the Brooklyn Burough Hall in New York City.

“All is praise is indeed due to the Most High! I am humbled that my community has entrusted me with the immense responsibility of ensuring that EVERYONE has notice and a FAIR opportunity to be heard in the halls of justice,” Walker wrote on her website.

I am probably supposed to dislike this, but I really don’t care who she prays to or what book she swears on. If the point is to swear in on something sacred to you, in which I would swear myself in on my cat, then I guess whatever works – works. However, this should not be grounds for judges to act like me and swear themselves in on ridiculous items.

I am very satisfied that she wore a hijab and not a nijab which covers everything but the eyes, or the burka which covers the entire face including the eyes. If she walked in wearing a nijab or burka, I’d kick her out faster than the New York minutes everyone mentions. I do believe fashion bloggers will certainly criticize that dollar store looking hijab she scrapped together on the way to induction.

Burkas and nijabs are ridiculous. If everyday was supposed to be Halloween, then let me know so I can wear a mask too.

Let’s see what Judge Walker has to offer and if she slips up, give her the left, right, and center boot and don’t ever make that mistake again.