Barack Obama and the White House[1] have come out with a brand spanking new propaganda video narrated by Jeh Johnson. It shamelessly and dishonestly uses women and children to push Syrian refugee resettlement. It’s despicable. Meet Reema – she’s the Syrian Muslim version of Julia. You remember Julia, right? The propaganda video that showed how the State would take care of all of us from cradle to the grave. Well, now Meet Reema! The video states that most Syrian refugees are women, children and families. That’s a monstrous lie to begin with. The refugees are 98% Muslim and over 70% are young, fit men of fighting age. But women and children get sympathy and they pull heart strings, so that’s what they push. It’s all sheer propaganda for Obama’s agenda. The video even goes into how they are vetted, which they can’t be. They have no paperwork and if they do, typically it is falsified. There’s no way to tell where they come from, their intentions or their backgrounds. 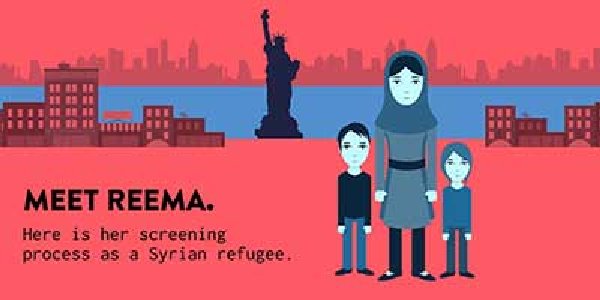 Remember Julia[3]? Reema is the Syrian Muslim Julia! This will make you want to scream! There is nothing to “crosscheck” her “biographic and biometric” data with—there is no data available from Syria!

Interesting that it confirms that it is the UN High Commissioner for Refugees sending the Syrians to your towns! And, that they have 23,000 in a pipeline to America at this very minute.

It’s interesting how they come right out and admit that the UN High Commissioner for Refugees is the one approving and sending the so-called Syrians to America and our cities. Those that tell you Obama wants 10,000 in the next two years to come here have missed the mark massively. He wants at least 200,000 and 23,000 are in the pipeline right now. Jeh Johnson says there are refugee conditions. There aren’t. Everyone is being taken regardless of circumstance. Officials have said that over and over, so that is another lie. The video is full of them. Just how do you do a deep background check on people who don’t even have a birth certificate? Who don’t have a passport or any records whatsoever? And please spare us the biometric crap. Most of these people are not in law enforcement or intelligence databases anywhere. Interviews are formalities and mean nothing. This is rubber stamping an invasion using slick propaganda and women and children as props. It makes you want to scream and throw something.