Ted Cruz Just Brought to Light Another Crime Committed by Obama; And It’s a Whopper [Video]

Comedian David Axelrod just claimed that this Administration has been scandal free…[1] So, after I spit out my coffee and picked myself up from the floor from laughing uncontrollably, I pondered what Ted Cruz just said about Obama counterfeiting immigration documents[2]. That’s exactly what Obama is doing by illegally printing work authorizations for illegal aliens. It’s not just a scandal anymore… it’s a direct violation of federal law. Obama has no such authority and committing such an act should be prosecutable. In other words… if there were real justice, Obama would be sporting new jewelry on his wrists instead of teeing off on the green. It’s a federal crime and merits prison time. 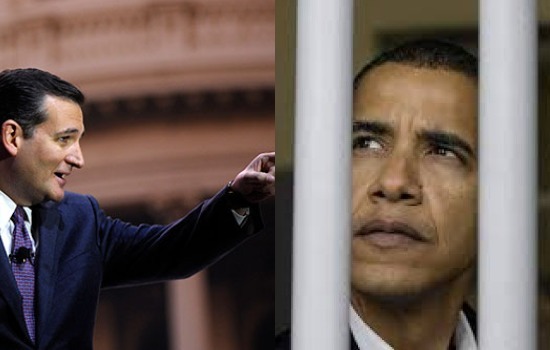 Senator Ted Cruz, a likely 2016 Republican presidential candidate and a favorite within the pro-liberty, pro-Constitution grassroots Tea Party movement, said that Obama has gone way beyond prosecutorial discretion with his unconstitutional amnesty for illegal aliens, but is basically “counterfeiting immigration documents.”

Appearing on FOX News’ “The Kelly File” with Megyn Kelly on Tuesday, Sen. Cruz accused Obama of a “my way or the highway approach,” and that just because Congress may not give him everything he wants, and he is unwilling to compromise, doesn’t give him to the authority unilaterally ignore federal law and violate the Constitution, and America’s system of checks and balances.

“This district court opinion, it’s a 50-page opinion which I would encourage anyone interested in the law to read this opinion, because it’s a careful, scholarly opinion. And one of the things it points out is the president has claimed, rather absurdly, that the basis of his authority is quote, ‘prosecutorial discretion,’ that he is simply choosing not to prosecute four-and-a-half million people here illegally.

But what the district court concluded quite rightly, is they’re doing far more than that. The administration is printing work authorizations — it is affirmatively acting in contravention of federal law.

Basically, what it’s doing is counterfeiting immigration documents, because the work authorizations it’s printing are directly contrary to the text of federal law, and it is dangerous when a president ignores federal law.”

Before declaring his illegal amnesty Obama previously claimed 22 times, in his own words, that he had no such constitutional authority[3], including the infamous “I’m not a dictator,” and “I’m not a king” lines.

Obama did indeed claim 22 times that he did not have the powers of a dictator or a king. That he would love to bypass Congress, but was bound by Constitutional law. Well, those were the good ole’ days. As much as I would love to believe that Judge Hanen’s ruling will stop Obama dead in his tracks on Amnesty, I highly doubt it. He will pretend to cease and desist, but his plans to flood America with foreigners to set up a permanent Marxist voting bloc will continue. Just quietly, until he can find a way to circumvent this pesky judge and the law. Remember, this is the most corrupt Presidency in history. Obama will not let anyone slow him down for long. He’s got more ‘change’ in store for us before he’s done.