The TSA is totally out of control[1] and as I have said many times before, they should be disbanded. Security should be privatized and taken out of the government’s hands. This man’s rights were absolutely trashed. They threw him in a cell for 20 hours with no call to his wife or attorney… no interview by police or TSA… no rights read or charges filed. I hope he kicks the TSA’s butt in court. I think I can safely say we are all absolutely sick of regular Americans being treated like terrorists because someone didn’t like the cut of our jib, or for some other frivolous reason, such as being white, good looking, famous, well-to-do, etc. He filed a complaint, TSA didn’t like it and punished him by locking him away. It’s feeling more and more like Russia around here every day. 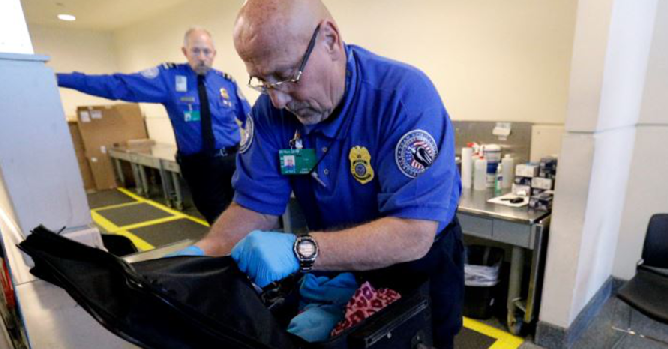 A traveler detained for more than 20 hours after a search of energy bars and a sports watch in his carry-on bag at an airport has sued the Transportation Security Administration and accused a TSA supervisor of lying.

Architect and runner Roger Vanderklok said he was arrested after asking TSA workers how to file a complaint. He said he spent nearly a day in a holding cell without being questioned by police or given the chance to call his wife, who was frantic.

“It’s difficult to lose control of your existence. That’s what it amounts to,” Vanderklok said Wednesday. “I was absolutely terrified.”

According to Vanderklok, the TSA supervisor lied to police and again in court when he said the 58-year-old runner had made a verbal threat during the January 2013 security check at Philadelphia International Airport. Vanderklok was on his way to Miami for a half-marathon.

The TSA said it was concerned about the gear in his bag: what turned out to be the watch and the power bars, wrapped in a small PVC pipe for protection. Electronics and “organic mass” can be used to make bombs, TSA Supervisor Charles Kieser testified at an April 2013 criminal trial.

But Vanderklok’s lawyer, Thomas Malone, argued in court: “I don’t think PowerBars are consistent with bombings, nor are watches.”

A judge quickly dismissed threat charges against Vanderklok, who filed his lawsuit Jan. 23, seeking unspecified damages for what he considers a retaliatory arrest. The Philadelphia Daily News first reported on the lawsuit Wednesday.

Kieser testified an agitated Vanderklok raised his hands and repeatedly pointed a finger at his face.

“The passenger made a bomb threat to me,” Kieser testified, according to a transcript. “(He said) I’ll bring a bomb through here any day that I want … and you’ll never find it.”

Vanderklok insists he said nothing about a bomb. The security video shows him standing calmly with his arms in front of him holding a laptop, his lawsuit says.

The TSA does not comment on pending lawsuits, a spokesman said. Kieser does not appear to have a listed phone number.

The city’s chief deputy solicitor, Craig Straw, said his office had not seen the lawsuit.

Vanderklok flies frequently for work and had set a goal of running 60 half-marathons by his 60th birthday. He never made it to Miami. And a back injury has stalled his tally at 38.

“I’m not going to get there,” he said Wednesday, sitting in the book-lined condominium he shares with his wife.

He said he hopes to return to form soon and avoid any more travel drama.

In another TSA case in Philadelphia, a former college student recently won a $25,000 Department of Justice settlement and police retraining after he was held for five hours over Arabic flashcards in his pocket that included the words for “bomb” and “kill.”

TSA Supervisor Charles Kieser looks to be flat-out lying. He’s now trying to cover his sorry ass after being caught in an act of unconstitutional spite, claiming Vanderklok made a bomb threat and got in his face. Problem is, the cameras tell the truth here. Just another tin pot dictator-wannabe who gets his jollies by putting people in their place that he feels insult him. This is quintessentially Progressive – classic Marxist behavior. I’ll bet Vanderklok was terrified in that cell just as he says. Somehow we’ve gone from a constitutional Republic where you are innocent until proven guilty with attendant rights, to guilty without recourse and thrown into a cell with no rights whatsoever. Vanderklok wanted to file a complaint, now he’ll file a lawsuit and I hoping he wins big.